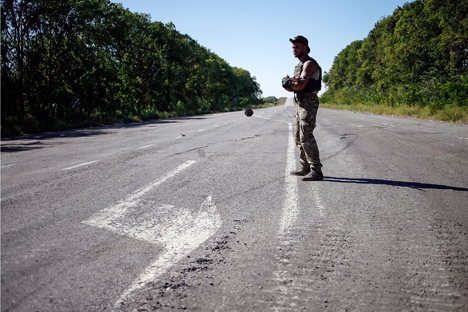 On September 5, Kiev and the breakaway republics in eastern Ukraine agreed to a ceasefire, and talks are due to continue in Minsk this weekend. Russian commentators interviewed by RBTH say that they believe the current ceasefire could lead to progress in resolving the crisis, but both sides will need to take more moderate positions and find common ground.

On Friday, September 5, representatives of the Ukrainian authorities and the self-proclaimed republics of Donetsk and Lugansk signed a ceasefire protocol, with both sides pledging to end hostilities and ensure the delivery of humanitarian aid to the affected regions.

This also assumes the exchange of all prisoners of war, the removal of all “illegal armed formations, military equipment, fighters and mercenaries on the territory of Ukraine,” an amnesty for combatants, and the beginning of a comprehensive political dialogue with the guarantee of personal safety for participants in future negotiations. Representatives of the OSCE will engage in the monitoring of the situation on the Russian-Ukrainian border.

Ukrainian authorities have also pledged to adopt a program for economic recovery in the Donbass.

The current truce differs from the previous one essentially because it was preceded by a bad experience in negotiations. Now, steps are being taken to prevent the sides from firing, which didn’t happen last time, and a range of measures has been implemented to ensure the reliability of the truce and that both sides adhere to it.

The foundation for a dialogue on the status of the two breakaway republics of Ukraine has also been laid. This is a respectable agreement, in which the guarantors are Russia, representatives of the Donetsk and Lugansk people’s republics, Kiev, and the OSCE.

There is a feeling in the air that two months after the previous attempt, everything is leading to the end of the bloodshed: The Ukrainian army, the people, and the authorities have grown tired of war, as well as Moscow and Europe. The time has come to say: “Enough! Let’s end this mess already!”

For Moscow to go further down the path of escalating the conflict there would inevitably be direct confrontation with NATO, despite all the declarations and Obama, Putin, and member countries of the alliance. The main political goal of the Kremlin today is to avoid this, as more and more attention is being demanded by new global security issues, which have come to a head over the last two months – in particular, the events in Iraq and the Middle East, as well as the threat of terrorism against the Russian government and people of the North Caucasus.

The main issue is the future status of the Lugansk and Donetsk regions. Petro Poroshenko will make no concessions either before or after the elections to the Verkhovna Rada. His previous statements have been based on a united Ukraine and he will continue this policy henceforth.

A small concession on the status of the eastern regions is possible: e.g., in economics, finance, and language, but nothing more.

In general, a resolution to the crisis is possible by focusing on the east of Ukraine – where the crisis began.

Poroshenko is being forced to maneuver between the European Union and the United States, given that after the announcement by Angela Merkel of the EU’s position on the impossibility of a military solution to the Ukrainian crisis, he called for a peaceful solution to the crisis.

The United States has a different position, and has made no statements of the kind made by the German chancellor. Americans support a political solution, but would be happy with a complete victory for Kiev. Prime Minister Yatsenyuk reflects this approach, stating that Kiev will not negotiate with terrorists.

I’m not convinced that the signing of the ceasefire will lead to a complete end to hostilities. Poroshenko only has control over the country's armed forces and the National Guard. The battalions of Ihor Kolomoyskyi and Serhiy Taruta are not subordinate to the President, and this truce will allow them to pick up where they left off earlier with their shelling.

The latest efforts by the militias in eastern Ukraine have showed that the aim of the Kiev authorities, i.e. to achieve complete victory by the end of summer, was unlikely to be achieved. But it also became clear that the militia's military capabilities are limited.

The Minsk talks have shown that both sides still have not reached a consensus in resolving the crisis. Poroshenko’s balanced position has generated a lot of criticism from Kiev, and many Ukrainian politicians are building their election campaigns in the country’s parliament as opponents of the President’s stance, while at the same time scoring political points.

In eastern Ukraine, not everyone is ready to support the compromise either. There are radicals who believe that they need full independence and detachment from Ukraine. However, in order to achieve success in the negotiations, radicals on both sides need to be stamped out. The coming days will show whether the Minsk agreement will pass the test of time.

Read more: After the truce: Where now for eastern Ukraine?