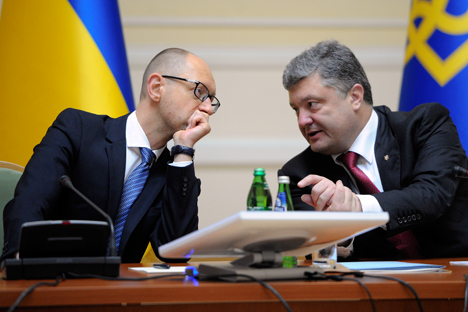 The parliamentary elections in Ukraine are coming. Source: AP

RBTH presents a selection of views from leading Russian media on the latest developments in Ukraine, featuring analysis of a new bill proposed by Ukrainian President Petro Poroshenko conferring “special status” on districts of eastern Ukraine, the upcoming parliamentary elections, and a report on public opinion in the east among supporters of autonomy.

Gazeta.ru reports that Ukraine’s parliament, the Verkhovna Rada, is scheduled to review a bill proposed by Ukrainian President Petro Poroshenko on the “special status of local government” in certain Donbass districts currently under the control of the unrecognized Donetsk and Lugansk people’s republics. The bill also grants amnesty to pro-autonomy militants, worded in the document as “participants in the events in Lugansk and Donetsk.”

However, in Gazeta.ru’s opinion, the wording of the bill leaves room for debate and could upset both the pro-autonomy militants and the parliamentary deputies. “Special status of local government” guarantees Donetsk and Lugansk socio-economic support, the right to use the Russian language, “enhanced and deepened” relations with Russian regions, and the right of the local authorities to command “their own militias.”

However, the Donetsk and Lugansk people’s republics are demanding full independence. It is as yet unclear which territories will receive “special status.” The militants want it to cover the entire area of the Donetsk and Lugansk regions, while the Kiev authorities are saying “special status” applies exclusively to the districts within the boundaries of the “anti-terrorist operation,” which is a much more modest area.

Meanwhile, Vzglyad reports that advocates of full independence for the republics do not trust the Kiev authorities and are not willing to reach a compromise. According to Russian political scientist Sergei Markov, public opinion in the Donbass is divided with respect to the territory’s status. Some people are in favor of union with Russia, others want a confederation with Ukraine, and still others agree with the “Transnistrian option” (Moldova does not recognize Transnistria’s independence, although the armed conflict is frozen).

Rossiyskaya Gazeta analyzes the upcoming Verkhovna Rada elections and comes to the conclusion that the Party of Peace faction, which unites everyone in favor of a peaceful resolution to the conflict in the Donbass, may not be represented in parliament at all. The Party of Regions, which has a solid support base in the Donbass, is not running at all because of its extremely low rating and the impossibility of holding elections in several districts of the Donetsk and Lugansk regions, where the “anti-terrorist operation” is being carried out.

Despite the fact that other moderate forces have the chance to make it into parliament, Rossiyskaya Gazeta is convinced that there will be fewer doves than hawks in the Rada. In the newspaper’s opinion, the hawks include Yulia Tymoshenko’s Batkivshchyna Party, Arseniy Yatsenyuk’s People’s Front, and Oleh Lyashko’s Radical Party, all of which want to continue the “anti-terrorist operation” until victory is secured, and which are not willing to compromise with the pro-autonomy militias.

Rossiyskaya Gazeta quotes Ukraine’s ex-Defense Minister Anatoliy Hrytsenko (he heads the Civil Position Party) as saying that the elections will legitmize the country’s split because the Donbass will not participate in them.

Nezavisimaya Gazeta thinks it possible that a coalition of President Poroshenko’s party (the Petro Poroshenko Bloc) and Prime Minister Arseniy Yatsenyuk’s party (the People’s Front) will play a key role in the newly elected parliament. Commenting on the situation, Ukrainian political scientist Volodymyr Fesenko noted that “there is no harsh rivalry between the president’s and prime minister’s teams. They agreed European-style to participate in the elections separately, but later create a joint coalition.”

According to Fesenko, the Poroshenko-Yatsenyuk union is now a key element ensuring balance among the Ukrainian authorities. “Poroshenko has taken on foreign policy, and Yatsenyuk switched predominantly to economic issues after Poroshenko’s election,” the political scientist said.

Nezavisimaya Gazeta writes that now, “against the backdrop of a war in the Donbass and a tough economic situation, Poroshenko and Yatsenyuk are managing to find common ground.” In light of this, Poroshenko’s main political opponent will be veteran of Ukrainian politics Yulia Tymoshenko, who is taking a hard line on the Donbass, advocating a resumption of the “anti-terrorist operation” and rejecting any compromise.