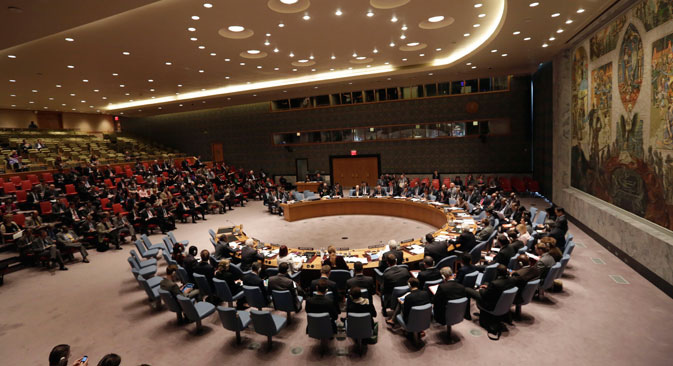 The 69th session of the UN General Assembly opens in New York on Sept. 16. It will be chaired by the foreign minister of Uganda, Sam Kutesa, who will focus on promoting the issue of sustainable development beyond 2015.

The 69th session of the UN General Assembly is getting under way in New York. Russia, whose delegation at the so-called ministerial week (from Sept. 24 to Oct. 1) will be headed by Foreign Minister Sergei Lavrov, sees the main task of the international community in joining efforts to promote peace and security and resolve conflicts. From the point of view of Moscow, this can be achieved only through joint efforts, as the era of a unipolar world is over.

The Russian Foreign Ministry has told RBTH that Russia will continue to focus efforts on developing a unifying and positive agenda for the United Nations Organization. That includes the promotion of a number of traditional initiatives, including international information security and the prevention of an arms race in space.

According to the ministry, Russia will actively resist any attempts to revise the outcomes of World War II and to rehabilitate Nazism. This topic is particularly relevant ahead of the 70th anniversary of the victory over Nazi Germany.

The UN Security Council (UNSC) has already held 23 sessions devoted to Ukraine-related issues. Russia's latest initiative concerned not just the humanitarian aspect and the delivery of humanitarian aid but also the overall need to begin a political settlement in Ukraine.

However, the initiative did not find support among Western nations, who argued that the Russian draft required supplementing with various additional provisions. Incidentally, the seven-point plan for resolving the crisis in Ukraine proposed by President Vladimir Putin has now been circulated as an official UN document.

Situation in the Middle East

In September, the presidency of the UNSC rests with the United States and during the so-called ministerial week, President Barack Obama intends to hold a high-level session of the Security Council to discuss the threat presented by foreign militants fighting for the jihadist Islamic State organization. The U.S. has already circulated among the UNSC members a draft resolution obliging UN member states to take measures to prevent their citizens from joining the militants, an action that should become a serious criminal offense.

Russia supports the idea of the resolution proposed by the United States. However, at the relevant session it will not fail to mention that at the height of the Syrian crisis, it warned of the danger of condoning extremists.

"Back then, our Western partners were concerned only with one goal – to overthrow al-Assad's regime – and used to that end, among other things, channels of assisting the extremists, who were and still are fighting against the Syrian government,” said Russian Deputy Foreign Minister Gennady Gatilov, who oversees Russia's participation in the UN and other international organizations.

“Now they have seen that the problem has another aspect. The Islamic State and radical extremists threaten the whole region," said Gatilov.

Experts point out that the United States’ efforts to set up an international coalition do not only confirm the gravity of the situation in the Middle East but also show that it does not want to start an attack against the Islamic State on its own, all the more so when the outcome of any attack is far from certain.

"Washington needs international legitimacy,” says head of the Center for Socio-Political Studies Vladimir Yevseyev. “In fact, the Americans are fighting not for Iraq but for Iraqi Kurdistan. Judging by the location of their airstrikes, they are at pains to make sure that the Kurds do not suffer. Hence the question: Aren't the Americans going to set up a de jure independent Kurdistan?

“There is this possibility in principle, but then this will be an issue not just for Iraq but also for Turkey and, in future, even Azerbaijan. It is no coincidence that Ankara has already refused to join the coalition. From that point of view, it is important for the United States that whatever happens in the Middle East, it is not directly linked to U.S. policy."

For his part, French President Francois Hollande has proposed convening a high-level meeting to discuss the issue of restricting the use of the right of veto at the Security Council. In his opinion, UNSC permanent members should renounce that right in cases of mass human rights violations, genocide, etc.