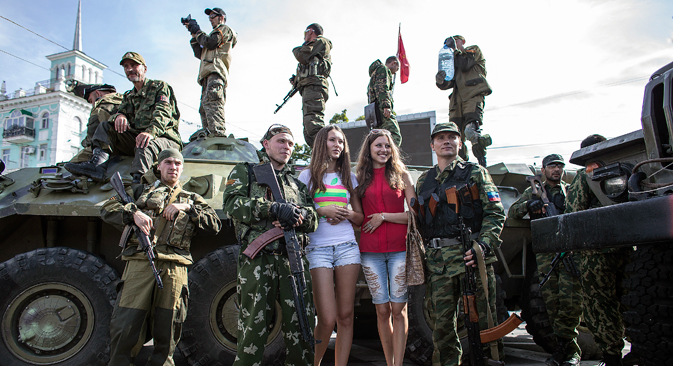 Women pose for a picture with pro-Russian rebels during a parade in Lugansk, eastern Ukraine. Source: Reuters

Ukraine’s Verkhovna Rada has adopted a law granting special status to the Donetsk and Lugansk regions. However, Russian political scientists have conflicting opinions about the status of south-eastern Ukraine and how long the peace process will last.

On September 16, 2014, Ukraine’s Verkhovna Rada voted on a law put forth by President Petro Poroshenko granting special status to the Donetsk and Lugansk regions. The parliamentary deputies supported the law, which prolongs the autonomy of several districts in south-eastern Ukraine to three years. The ceasefire remains in place, but there is much debate among Russian and Ukrainian experts over the legitimacy of the peace negotiations.

Two hundred and seventy-seven of the Verkhovna Rada’s 450 deputies voted in favor of the law, which grants special status to the Donbass and calls for elections and the free use of the Russian language. Poroshenko said that this law will make it possible to decentralize authority in south-eastern Ukraine. The president also expects these changes to be reflected in the Ukrainian constitution.

Poroshenko submitted the draft law on extended status for the Donetsk and Lugansk regions to parliament after an expanded Cabinet of Ministers meeting on September 10. During the meeting, Poroshenko for the first time expressed his willingness to make concessions and further the Donbass’ autonomy.

On September 8, the presidents of Ukraine and Russia held telephone negotiations and announced that the ceasefire was holding. As part of the peace process, prisoners of war have been exchanged, humanitarian aid has been delivered to the affected regions, and illegal armed groups have been withdrawn. The Kremlin noted that the two leaders will continue to maintain their dialogue.

Meanwhile, Kiev has started regrouping the forces in its anti-terrorist operation, and the separatist fighters confirm that there have been clashes in Donetsk and Mariupol. Experts are at odds as to how long the peace process will last. The only aspect they can all agree on is that negotiations on the status of Ukraine’s south-eastern regions need to continue.

Timofei Bordachev, director of the Center for European and International Studies at the Higher School of Economics, is not convinced that the peace process in eastern Ukraine will last.

“The Ukrainian authorities set about outright blackmailing the Donetsk and Lugansk regions after the ceasefire was reached. Kiev’s statements about building a wall [Ukraine has announced plans to fortify its border with Russia – RBTH] and creating certain reservations on the Russian border confirm this. The actions of the authorities in Kiev are cynical. They present the negotiations between Poroshenko and Putin as evidence that Russia is a party to the conflict,” said Bordachev.

Vadim Karasev, a Ukrainian political scientist and director of the Institute for Global Strategy in Kiev, sees the termination of large-scale hostilities as the greatest success of the fledgling peace process in eastern Ukraine.

“Putin and Poroshenko are the main participants and actors in the negotiating process. What is the current ceasefire plan called? Putin’s plan. What is the name of the peaceful resolution put forth in June? Poroshenko’s plan. That says it all. It wasn’t Leonid Kuchma and the representatives of the breakaway Donetsk and Lugansk People’s Republics – Igor Plotnitsky and Alexander Zakharchenko – who determined the outcome of the negotiations in Minsk. The truce will last as long as it is beneficial to the leaders of both countries,” Karasev told RBTH.

In the opinion of Andrei Sushentsov, a political scientist, Partner with foreign Policy Analysis Group, the issue of determining the political status of the Donetsk and Lugansk regions will be dragged out.

“The first steps in the peaceful settlement process are mostly technical. There is no tolerance regarding the future political status of the Donetsk and Lugansk regions. Poroshenko is glad that the separatists have not expanded the zone of territory under their control. The campaign, which was unsuccessful for Kiev by all indicators, did not end as catastrophically as it could have.

“The president will try to find common ground with them within a year or two, while preserving the state’s unitary character. He doesn’t even count on the Donetsk and Lugansk regions participating in the parliamentary elections. He possibly might not even want there to be elections there at all,” Sushentsov said.

Yury Fyodorov, a political scientist and member of the board of the PIR Center, thinks that Kiev “needs a breather” in order to consolidate power, hold elections, and most importantly, create modern armed forces, otherwise “Putin and his clique could theoretically occupy the entire Donbass and create a corridor to Crimea.”

“The OSCE’s task is to lend some respectability to the agreements that will be reached (if they are reached) between Poroshenko and Putin. Peace will come to Ukraine if and when Kiev decides to abandon ‘certain districts’ of the Donbass by granting them independence and thereby ridding itself of the burden of spending to maintain infrastructure and restore the economy. Until then, it will continue in a state of neither peace nor war,” said Fyodorov.

Meanwhile, spokespeople for the Donetsk and Lugansk regions said they are interpreting the newly adopted law as “a point for future dialogue.”