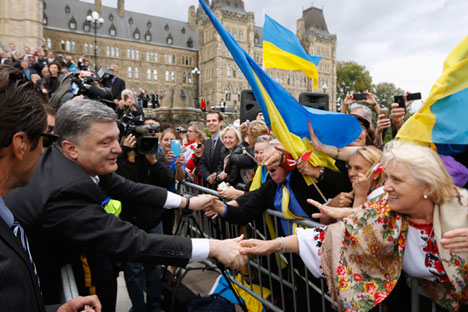 RBTH presents a selection of views from leading Russian media on the latest developments in Ukraine, featuring analysis of the geographical problems presented by the ceasefire in the Donbass, Petro Poroshenko’s visit to the U.S. and the potential assigning of Kiev a special status as an ally by Washington, and a meeting between opposition politicians from the Ukrainian parliament and the speaker of the Russian Duma, Sergei Naryshkin.

“The ceasefire in eastern Ukraine is in jeopardy of breaking down,” writes the Kommersant business daily. Separatist sources from the breakaway Donetsk People’s Republic told the newspaper that artillery fire is still under way in Donetsk, killing two people over the past day. According to the unrecognized republic’s First Deputy Prime Minister Andrei Purgin, the Ukrainian military has started using heavy weaponry again. Ukraine, meanwhile, accuses the pro-autonomy militants of violating the ceasefire. Several Kiev politicians have spoken of the theoretical possibility of resuming the “anti-terrorist operation.”

Meanwhile, Kommersant quotes Ukrainian political analyst Dmitri Djangirov as saying that the parties are sufficiently fatigued from the hostilities to have established a “shaky, broken ceasefire that it would be beneficial for all parties to the conflict to consider a peace.” In Djangirov’s opinion, “the principle of disengaging the warring parties” needs to be implemented if the ceasefire is to hold. In other words, the armed forces need to be withdrawn to a certain boundary from which it would be impossible to continue firing on one another.

According to the newspaper Vzglyad, the lack of a clear understanding as to where exactly the border between territories controlled by the Ukrainian army and the militants are makes it impossible to disengage the warring parties. In its analysis of the situation, Vzglyad arrives at the conclusion that the obvious weak point in the law adopted on Tuesday granting special status to districts in the Donbass under the control of the breakaway republics is the uncertainty regarding which territory will fall under the militants’ jurisdiction.

Standing in the way of setting clear demarcation lines are “entrapments” – that is, population centers where the Ukrainian army is blocked in, surrounded on all sides by fighters from the breakaway republics (their status is unclear: whether they will become “enclaves” in the Donetsk and Lugansk people’s republics or whether fighters loyal to Kiev will be withdrawn from there). There is also uncertainty stemming from the fact that the frontline crosses straight through regional infrastructure in several areas.

Meanwhile, Nezavisimaya Gazeta comments on Ukrainian President Petro Poroshenko’s visit to the United States. Press reports have said that the Ukrainian president and his American colleague plan to discuss the possibility of Ukraine acquiring the status of a non-NATO strategic ally. With this status, the U.S. would be able to provide Ukraine with large quantities of weapons.

Many political analysts have doubts as to how realistic this option is. Vladimir Gorbach, an expert at the Institute for Euro-Atlantic Cooperation, said that “if the U.S. considered it necessary, it could provide Ukraine weapons or military equipment without that document. But like Brussels, Washington is in no hurry with that decision,” the expert said.

In Gorbach’s opinion, Europe and the U.S. are trying to act with caution so as to avoid giving reason to believe that the West is involved in the war. This is why they are limiting their activity, imposing sanctions against Russia and providing Ukraine with humanitarian and financial aid, but no weapons. At the same time, Ukrainian experts think that Kiev’s adoption of laws granting special status to the Donetsk and Lugansk regions was aimed at preparing for Poroshenko’s visit to the U.S. By doing so, the Verkhovna Rada created a positive image of Poroshenko as a peacemaker capable of compromise.

Gazeta.ru reports that Russian State Duma Speaker Sergei Naryshkin met on Wednesday, Sept. 17 with opposition deputies of the Verkhovna Rada from the “For Peace and Stability” group, previously in the Communist and Party of Regions factions. According to Yevgeny Balitsky, a delegate from the group of Ukrainian deputies, the purpose of the visit was to “establish contact between State Duma and Verkhovna Rada deputies.” Vadim Karasev, director of the Ukrainian Institute of Global Strategies, thinks that the sole objective of the visit was for the opposition deputies “to somehow stay afloat” with Russia’s support. According to Karasev, their time in politics has passed; there will be no place for them in the Ukrainian parliament after the elections.

Russian political scientist Alexei Makarkin believes that Naryshkin’s meeting with the Ukrainian deputies is a signal to all of the pro-Russian forces in Ukraine that “we won’t abandon you.” “Politicians who are currently perceived as complete outsiders could become serious political partners in the future. That’s why they’re being welcomed so demonstratively,” Makarkin said.