Do best things in life come for free? 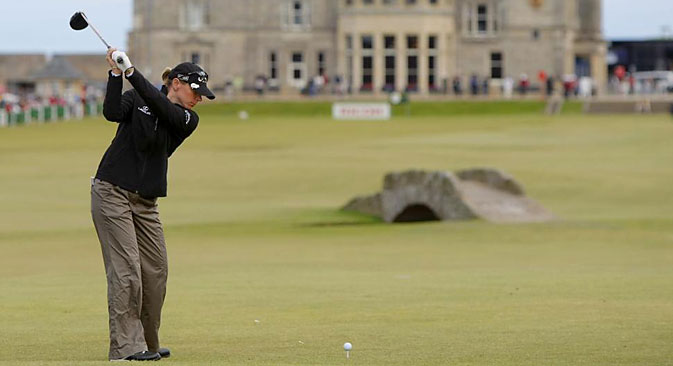 The Royal and Ancient Golf Club has voted in favour of allowing women members for the first time in its 260-year history. Source: AP

A Russian eye on what was happening in the UK last week: while women breach male-only defences on the putting green, a university defends its ceremonial extravagance.

While the Scots were busy voting for or against full independence, another historic vote took place, which was hardly noticed by the world fixated on the “Ayes” and ‘Nays”. The Royal and Ancient Golf Club, almost as old as the Scottish-English Union itself has voted in favour of allowing women members for the first time in its 260-year history. The similarities with the indie ref did not stop there. The postal turnout of voting members, and there are 2,400 worldwide, was as impressive as that at the referendum: 75 percent.

However, unlike the other ballot the balance of votes here was in favour of “yes” - to female members. It’s not that women were barred from driving and putting on the St Andrews links course. But when it came to enjoying après-golf activities at the club house they were reminded that the “home of golf” was for men only. Neither could they influence the running of the sport by R&A, the Club’s offshoot that governs the game around the world with the exception of Mexico and the United States. There, the male-only defences were breached by the Augusta National Club in 2012 when they allowed two female members for the first time in their history. To better this score, the Royal and Ancient are going for a condor (or triple eagle, if you are in Augusta) by “cutting the corner” to membership for 15 women, identified by the Club as having made a large contribution to the sport.

Will the Russian golf star Maria Balikoeva, famous for putting glamour on the fairways, in a similar fashion to tennis stars Anna Kournikova and Maria Sharapova be among the first to be invited to the club?

The green fees may not be for everyone’s pocket but there’s plenty of free entertainment around. Or, is there? One of the biggest and most spectacular freebies in London is about to be monetised. The New Year’s Eve fireworks have been the envy of the world ever since 2003, attracting as many as an estimated half a million spectators last year. This time round they will need to fork out a tenner each, if they are lucky enough to be among the first 100 thousand to be let into the enclosures on the Westminster Bridge and the Thames embankment.

How to enjoy the liveliest Russian New Year in Britain

The Mayor’s office says the exponential growth of spectator numbers over the years makes the show “untenable” as an un-ticketed event. Indeed, last year the capacity was reached hours before the first salvo, leaving hundreds of thousands of spectators in cramped conditions with many unable to get a good view. They also faced long delays after the spectacular to get home on public transport. Having these issues in mind Boris Johnson says he wants to ensure the fireworks display continues to be a “safe, enjoyable and sustainable event for the long-term”. Has he cracked the problem of restricting the open air show to the ticketed enclosure though? Otherwise, there could be a lot more overcrowding on the free side of the barriers.  But here’s an idea: a no less impressive display by the Kremlin walls is still free of charge. And White Christmas is guaranteed.

Fancy a seat instead of standing throughout a long event? Though not a match for the London fireworks display, Plymouth University’s annual graduation week attracts thousands of students and guests.

From now on they will enjoy some creature comforts too. The University has agreed to spend £150,000 on seven chairs for graduation ceremonies, the BBC reports. The handcrafted chairs have been commissioned from cult furniture designer John Makepeace. Defending the expenditure, which is yet to be confirmed, Professor David Coslett, deputy vice chancellor, said the graduation week attracted more than 25,000 visitors and injected about £700,000 into the city's economy. He said the university hoped to pay for the chairs through "private donations and charitable foundations".

Well, education need not  be that expensive; actually it can come with your weekly shop for free. Marks and Spencer has become one of the first retailers to offer a massive open online course, a mooc, of its own. Supported by Leeds University the M&S course will teach business innovation using examples from its archive, with 70,000 items going back to the 1880's. Will the course start with a story of a certain Mikhail Marks, who arrived in Leeds from the Russian Empire to set up a penny stall? He knew a thing or two about raising funds…

War museum in a garage

Of cheese, cosmonauts, radiation and the rhythmic appeal of media figures

Not all depositories of historical import are open to the public. A private collection of munitions from two World Wars has been uncovered in a garage in St Albans. It consists of a large amount of hand grenades, rifles, mortar shells, guns and ammunition. The haul, according to Hertfordshire police, is on an unprecedented scale. One officer dubbed it "a museum for World War One and World War Two relics". A man was arrested on suspicion that he obtained these artefacts through illegal metal detecting, which is a heritage crime.

In Russia such people are called “diggers” and are split into two rival camps: the “black” and the “white”. The “black diggers” as the name suggests sell their deadly finds on the black market, and they pop up now and then in armed conflicts in the former Soviet Union, East Ukraine being the latest example. The “white diggers” say their only aim is to establish the identities of the unknown soldiers to pay them proper last respects.

The keeper of the “museum” in St Albans is suspected of taking wartime munitions from protected sites including one in Batford, Harpenden. In 1943-44 there was a POW camp, first for Italian and then German prisoners, who were made to work in the fields. Was it them who buried all those weapons?