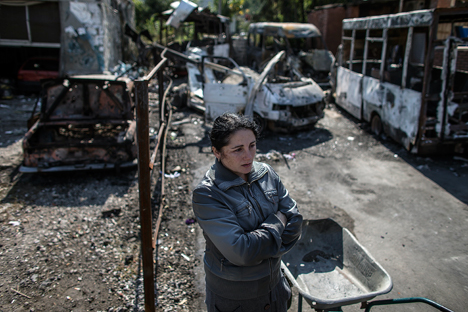 RBTH presents a selection of views from leading Russian media on the latest developments in Ukraine, including details of leadership elections in the breakaway regions in Ukraine’s east, analysis of the stalled reforms promised by Kiev and a new initiative in the gas dispute between Gazprom and Ukraine, and claims that the Black Sea port of Odessa is seeking a more autonomous role within Ukraine.

The Kommersant newspaper reports that the governments of the self-proclaimed Donetsk and Lugansk people's republics in the Donbass region of eastern Ukraine have announced a date for elections to the region's leadership and members of the Supreme Councils: November 2. Elections to Ukraine's parliament, or Verkhovna Rada, for the territories under the militias' control will not take place. Kommersant writes that people in Kiev are hoping that "it will be possible to include the Donbass in an all-Ukrainian political process."

The leadership of the Lugansk People's Republic told Kommersant that it is expecting "lots of cries and declarations about the illegality of the elections" from Kiev. The publication's ‘experts’ on Ukraine predict that, fearing a repetition of the Crimea scenario, the country's government will prefer "to keep silent rather than irritate the east."

"Ukraine has forgotten its reforms" - this is the headline of an article published in Gazeta.ru. The publication writes that even Ukraine's western partners, including the OSCE (Organization for Security and Co-operation in Europe), have begun criticizing it for its absence of promised reforms. The OSCE has stated that the pace of implementing the reforms in Ukraine has slowed down, something that happened right after Petro Poroshenko came to power.

According to the publication, European officials are mostly concerned about the fate of constitutional reforms: during the election campaign, Poroshenko promised to decentralize power, but so far this has not happened. Gazeta. ru remarks that the promised judicial reform, which the Ukrainian government agreed with the EU on the eve of ratifying the association agreement, is also being delayed.

"Frustration is growing within the country," the publication writes. Influential regional officials are waiting for the decentralization of power from Poroshenko, while the Maidan activists are waiting for the judicial reforms. The Ukrainian Cabinet of Ministers constantly promises businessmen deregulation and the reduction of taxes, however, entrepreneurs are complaining, according to Gazeta.ru, that fiscal pressure is only growing. The newspaper believes that the government can no longer delay the implementation of the reforms: in particular, it is necessary to immediately reduce energy subsidies. "However, to do that in the heat of the election campaign is equal to political suicide," writes the newspaper.

Expert magazine is once again addressing the gas issue. The publication informs its readers that the European Commission is proposing an intermediate decision in the disagreement between Ukraine and Russia in order to avoid gas supply problems in the fall-winter period. Gazprom completely severed gas supplies to Ukraine on July 16. Since then only transit volumes destined to Europe have passed through the Ukraine gas transportation system.

According to the publication, European Energy Commissioner Gunther Oettinger is suggesting that Ukraine and Russia sign an intermediate contract on supplies of certain volumes of Russian gas and afterwards wait for the conclusion of the Arbitration Institute of the Stockholm Chamber of Commerce.

Citing Ukraine Energy Minister Yuri Prodan, Expert writes that in the first phase Ukraine is willing to agree to "an intermediate price on natural gas, which must be a market price." The European Commission expects to arrive at a compromise price on Russian gas at a trilateral meeting between Ukraine, EU and Russia on September 26 in Berlin, in order to avoid problems with the security of gas supplies in the fall-winter period. The publication's writers, however, believe that the negotiations will be difficult due to Kiev's politicized attitude and Moscow's unwillingness to concede a strong position.

"Odessa is asking Kiev for autonomy," writes the Izvestiya newspaper, which claims that the people of Odessa want to follow the example of the Lugansk and Donetsk regions and receive special status for their area. According to the newspaper, a group of highly motivated deputies from Odessa's municipal council will present a bill for Odessa's autonomy next week that will be addressed to the Verkhovna Rada and Ukraine's Cabinet of Ministers.

Izvestiya says the document mentions that local government organs must independently choose the language that will be spoken in schools and in the government, determine the economic policy of the city of Odessa and create and control the activity of a people's militia. However, the newspaper cites experts as saying that Kiev is unlikely to expand the number of regions with special status.