Press Digest: Is Ukraine eyeing withdrawal from the CIS? 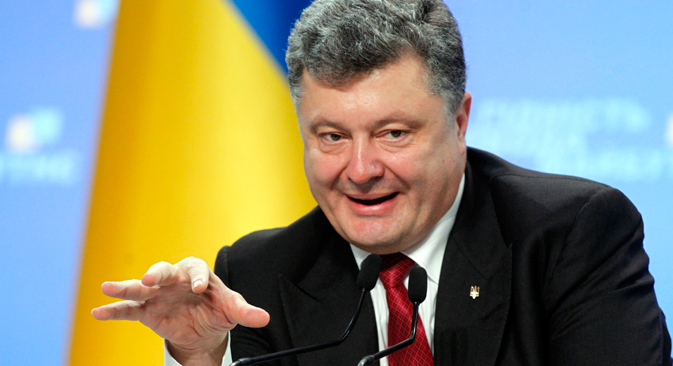 RBTH presents a selection of views from leading Russian media on international events, featuring a report on the law on the ‘purification’ of the government signed by Ukrainian President Petro Poroshenko, a discussion of whether Ukraine is seeking to leave the Commonwealth of Independent States, and an analysis of Turkey’s position in the struggle against ISIS militants in northern Syria.

The Kommersant newspaper writes that Ukraine still does not intend to leave the Commonwealth of Independent States (CIS). The newspaper reminds its readers that due to the Ukrainian conflict, Belarus is presiding over the Commonwealth for a second year straight, since Kiev declined its turn to head the organization.

Kiev became indifferent towards the CIS back in the spring and in the summer many high-ranking representatives of the new Ukrainian government announced that their country would soon leave the organization. They even managed to introduce a corresponding bill in Ukraine's parliament, the Verkhovna Rada.

However, according to Kommersant, despite the loud proclamations of Ukrainian politicians, Kiev has not taken any real measures to sever relations with the organization. On the contrary, Ukraine has actively fought for places within the Commonwealth's executive committee for the upcoming years.

"CIS membership gives Ukraine many privileges, such as visa-free transit for Ukrainian nationals in CIS countries and participation in the free trade zone," said an anonymous source.

Kommersant concludes that, although the Ukrainian government does not plan on leaving the organization, it does intend to reduce its CIS participation in the eyes of the public to a minimum.

Ukrainian President Petro Poroshenko has signed the law on the "Purification of the government," writes Gazeta.ru. The law determines the legal and administrative grounds for examining officials "with the aim of restoring trust to the government and the creation of conditions for the construction of a new system in accordance with European standards."

The publication writes that lustration (a term for the purging of government officials affiliated with the former regime) committees will be created in each ministry. The law says that officials will have to submit consent in writing to undergoing checks, as well as provide an autobiography and a copy of their passport.

Gazeta.ru notes that Ukrainian Prime Minister Arseny Yatsenyuk has initially calculated the number of people who may be subjected to lustration at 1 million. The law's main target is Soviet functionaries, security forces and the close entourage of deposed president Victor Yanukovych.

The officials who are purged or who refuse the checks may be stripped of their posts for 10 years. However, they will not lose their right to be elected to parliament, underlines Gazeta.ru.

The publication cites Director of the Ukrainian Institute of Global Strategies Vadim Karasev as saying that if the law is to be interpreted literally, Ukraine will simply lack personnel and the government apparatus will be completely destroyed. "Therefore the law can be considered as a so-called warning to the elites to stay loyal," remarks Karasev.

Nezavisimaya Gazeta newspaper writes that Kurdish units are continuing to battle radical ISIS (Islamic State of Iraq and the Levant) militias in the Syrian town of Kobane on the Turkish border. The international coalition headed by America is waiting for the intervention of Turkish ground forces, which Ankara has excluded.

Meanwhile, political experts are convinced that without Turkey the western countries will not be able to defeat the militias and will therefore have to agree to Turkey's conditions on cooperation, says the newspaper.

Nodar Mosaki, Senior Collaborator at the Institute of Eastern Studies at the Russian Academy of Sciences, told Nezavisimaya Gazeta that Turkey's main intention in the current situation is to damage the Kurdistan Workers’ Party, which has been carrying out an armed battle against Ankara for the last three decades. Mosaki believes that for Turkey the party poses a greater threat than ISIS.

Nezavisimaya Gazeta also remarks that in light of the current events the European Commission has decided to accelerate negotiations on Turkish accession to the EU. EU Commissioner for Enlargement and European Neighborhood Policy Štefan Füle emphasized in his annual EU enlargement report that it is important to improve political dialogue with Ankara, especially for the purposes of a joint fight against ISIS, adds the publication. "Without Turkey it will be more than difficult for the West to defeat ISIS, it will be impossible," says Mosaki. "Not a single land operation will be carried out - all the logistics go through Turkey."