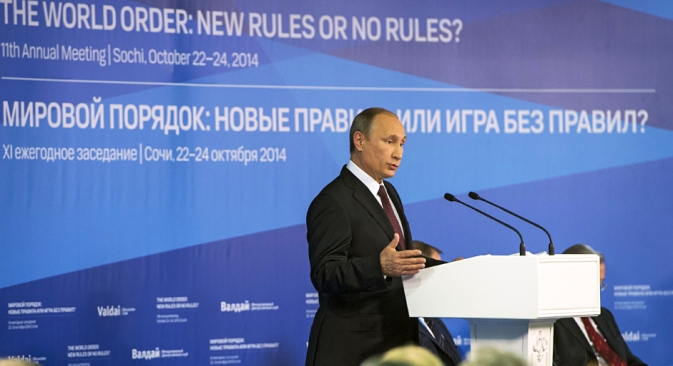 Russian President Vladimir Putin has called on the international community to establish a new world order with the aim of preventing future conflicts. Speaking at an international discussion forum in Sochi, Putin affirmed the immutability of Russia’s position and called on the West to enter into a dialogue to solve today’s problems.

Speaking on Oct. 24 in Sochi during a meeting of the Valdai International Discussion Club, an annual forum which brings together experts from dozens of countries to debate the role of Russia in the world, Putin called for priority to be placed on building a new system of relations that would prevent global and interstate conflicts.

He laid the majority of the responsibility for today’s problems on the United States, whose policies he said have led to the collapse of the global security system and a series of coups in the Middle East and Ukraine.

According to Putin, Moscow has no intention of isolating itself in foreign policy, despite the sanctions and souring relations with the West over the conflict in Ukraine. The Russian president said that the Kremlin was open to dialogue and to normalizing economic relations. Russia is also willing to engage in a substantive discussion about nuclear disarmament.

U.S. claims victory in Cold War, wants to carve up world to suit own interests - Putin

The unipolar world order has proven unsustainable for a hegemonic world power, Putin said, arguing that this “unstable structure” has proven its inability to effectively counter threats such as regional conflicts, terrorism, drug trafficking, religious extremism, chauvinism, and neo-Nazism.

“After all, a unipolar world is essentially an apology for a dictatorship over both people and countries,” the Russian president said.

There are no guarantees today that the current system of global and regional security is capable of providing protection against upheavals, Putin said.

Commenting on Putin’s speech, President of the Institute of Strategic Studies Alexander Konovalov pointed out that historically, shifts in world order had been determined on the battlefield.

“Earlier, a new world order that defined the rules of the game and the behavior of world powers was developed as a result of major wars. The victors met in Yalta and Potsdam to develop new laws of relations: the principles of border inviolability, the principle of national self-determination, the creation of the United Nations,” he told RBTH.

However, he added, although there is a greater need than ever for a new system, there has been no war that would determine the new world order: “The Cold War is over, but there was no peace agreement, nor was there an agreed principle of mutual relations. We need to create them, but no one knows who should define this new world order,” Konovalov said.

For Director of the Moscow Carnegie Center Dmitry Trenin, the difference between Putin’s notorious Munich speech of 2007 and his latest speech is that in 2007 the Russian leader was merely protesting against U.S. policy.

“Now Russia is actively opposing Washington’s policy in Ukraine and in Syria. The key idea of the [latest] speech was that a unipolar world does not take Russia’s interests into account, and Moscow will defend its position on issues that are key to it,” he told RBTH, adding that Russia has no plans to act as a hegemon or global arbiter.

In his speech, Putin warned of the growing probability of new regional conflicts, if not with the direct then at least the indirect participation of global powers: “Not only will traditional interstate contradictions become a risk factor, but so will the internal instability of particular states, especially with regard to countries located at the junction of the geopolitical interests of major states,” the Russian president said.

According to him, Ukraine has evolved into just such a conflict. Putin stressed that Russia had pointed out the haste with which backroom decisions were made on Ukraine’s association with the European Union, decisions which were seriously risky, particularly for Russia as Ukraine’s largest trade partner, Putin said.

“But they didn’t want to listen to us then. They said, ‘It’s none of your business.’ And instead of a complex – but, I stress, civilized – dialogue, they brought the matter to a coup d’état. They plunged the country into chaos, into the collapse of the economy and social sphere, into a civil war with enormous casualties,” Putin said.

“Apparently, they endlessly want newer and newer color revolutions [a reference to the so-called ‘color revolutions’ that took place in Ukraine, Georgia and Kyrgyzstan in the early 2000s – RBTH], they consider themselves to be genius artists, they can’t stop, and they don’t think at all about the consequences,” he added.

The main thesis was that Russia will definitely not become a totalitarian country. That was the main message that the world wanted to hear because it is that fear that has been troubling the international public opinion.

Overall, I expected a far more belligerent stance towards America and tougher assessments of the situation. I think Putin is earnestly committed to a search for a compromise. His answers about Ukraine were full of compromise.  I think Washington, having voiced its criticism of the speech, will probably try to see something positive in it. The positive thing was the absence of very harsh statements.

One of the things that Putin will be criticized for is the absence in his speech of any criticism of Russia’s actions. When something goes wrong, it is important to try and understand what your fault has been. Russia shares in the responsibility for a deterioration of the international situation. This is not just to do with Ukraine, it started earlier. There have been many aspects in which Russia could have acted more wisely.

Alexei Fenenko, a leading researcher with the Institute of International Security Issues under the Russian Academy of Sciences (RIA Novosti):

The main point of the president’s speech is that Russia rejects the USA’s claim to establish a new world order. International relations still, just as in Cold War years, are based on US nuclear parity and the advantage it has in terms of military potential compared to all the other countries. I would say that we live not in a new world order but in a modernized version of the Yalta-Potsdam one.

Stripped of its anti-American rhetoric, Putin’s speech says: we are entering a new period when there may start a discussion on revising the rules of the game. We are still living by the rules that were established by the victorious nations in 1943-1945. The whole logic of the development of the modern world system is moving towards the question of whether it will be revised.

Putin is urging the Americans to revise the world order. What this revision will consist of, what the deal will be is not clear yet. But there is clearly an appeal towards it.