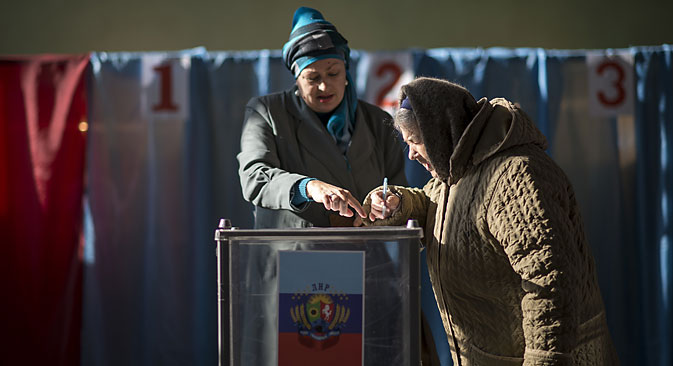 Over 527,000 voters have taken part in the elections of the head and parliament of the self-proclaimed Donetsk People's Republic.Soure: Valeriy Melnikov/RIA Novosti

Questions remain as to whether Russia will recognize the elections.

On Sun., Nov. 2, voters went to the polls in the self-proclaimed Donetsk and Lugansk People’s Republics in eastern Ukraine to elect regional leaders and parliaments. The elections were held in defiance of Kiev, which has scheduled regional elections for the entire country on Dec. 7. Moscow said it would recognize the vote, although the U.S. and the EU had asked Russia to refrain from doing so, and the Kremlin had made no official statement as of the end of the day on Monday.

In the Donetsk People’s Republic (DNR), three candidates were running for the position of head of the republic: the current prime minister Alexander Zakharchenko; Yuri Sivokonenko, a member of DNR’s parliament; and Alexander Kofman, a businessman and representative of the Yugo-Vostok (South-East) Movement. Representatives from two political movements, the Donetskaya Republika (Donetsk Republic) and Slobodniy Donbass (Free Donbass) were vying for seats in the local parliament.

Competing for the position of head of the Lugansk People’s Republic (LNR) was the current leader Igor Plotnitskiy, head of the Federation of Trade Unions Oleg Akimov, LNR Minister of Health Larissa Ayrapetyan and entrepreneur Viktor Penner. Members of the political movements Mir Luganshchine (Peace for Lugansk), Lugansk Economic Union and the People’s Union were running for parliamentary seats.

Any resident of the regions over the age of 16 could take part in the elections. Fifty-one international observers were also present in the regions on election day, including representatives from Russia, Serbia Montenegro and France.

According to Roman Lyagin, representative of the central election committee of the DNR, by mid-day, more than 500,000 people had cast their votes in the DNR and 300,000 in the LNR – 300,000. Refugees from Donetsk and Lugansk living in camps in the Russian regions bordering Ukraine were also able to vote in the elections.

On Nov. 3, Zakharchenko was declared the overwhelming winner in the DNR and Plotnitskiy won the election in the LNR, with 63.8 percent of the vote.

Lyagin told Russian news agency Interfax that the Central Election Commission of the DNR will ask Kiev to recognize the results of the votes.

"Kiev should come to terms with the fact that Donbas is no longer part of Ukraine. And it is Kiev's choice whether to recognize our elections or not," Lyagin said.

Russian authorities had said before the elections that the Kremlin would recognize the results. In a statement before the vote, Russian Foreign Minister Sergei Lavrov said: “The elections that will be held on Nov. 2 on the territories of the proclaimed Lugansk and Donetsk People’s Republics will be important in terms of legitimizing their governments. We believe that this is one of the most important sections in the Minsk agreements. We expect the elections to take place as planned, and we will certainly recognize their results.”

The Minsk Protocol of Sept. 5 stipulated that local elections be held in in accordance with the law of Ukraine "about local government provisional arrangements in some areas of Donetsk and Lugansk Regions."

EU representatives said in the week before the vote that it did not consider the planned elections to be consistent with the terms of the Minsk Protocol. "Early local elections in accordance with Ukrainian law, as foreseen in the Minsk Protocol, are the legal and legitimate means of renewing the democratic mandate of the local authorities in these parts of Ukraine," said EU High Representative and Vice President Federica Mogherini in a statement.

Will it or won’t it?

Despite Lavrov’s strong statements earlier in the week, after the elections, the Russian Foreign Ministry issued a statement saying only that it “respects the will of the residents of southeast" Ukraine.

Alexander Konovalov, president of the Institute for Strategic Assessments in Moscow, said that recognizing the results of the elections is complicated for Russia. “Moscow likes the fact that in Ukraine there is an opposition force pitted against the new authorities; that someone is exercising independence. However, in the Kremlin, they only have a vague idea on how further dialogue will be conducted with the new authorities of the DNR and LNR, who are expecting a lot from their relationship with Russia,” Konovalov said.

He added, however, that he believes that Moscow will keep providing economic support to southeastern Ukraine, including sending convoys of humanitarian aid.

Andrei Suzdaltsev, the leading researcher at the Center for Comprehensive European and International Studies of the Higher School of Economics in Moscow, said that Russian authorities were walking a fine line between supporting the elections and recognizing their results. “Russia did not recognize, but supported the desire of the people of the southeast to express their opinion in a referendum. The Kremlin wants guarantees that the cease-fire holds and political dialogue to resolve the crisis continues. If Kiev violates the Minsk agreements, then Moscow may recognize the results of the voting. This in fact would mean the recognition of the independence of the region,” Suzdaltsev said.

Konovalov also thinks that the elections could be used to influence Ukrainian authorities. “Embers of the conflict will continue to smolder, and Russia may, if need be, throw wood onto the fire. Elections in the DNR and LNR for Moscow will become a lever of political pressure on Kiev,” Konovalov said.

Ukrainian President Petro Poroshenko announced that he would hold a meeting of the Ukrainian National Security Defense Council on Nov. 4 to discuss the situation. EU representatives will also meet this week to discuss the introduction of new sanctions against Russia.