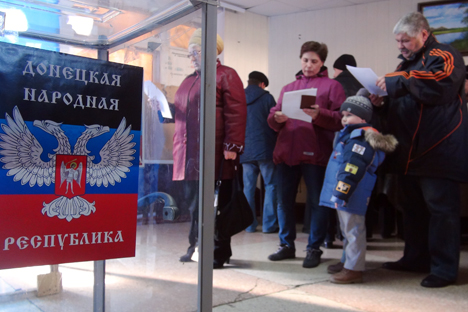 According to Kommersant, the international reaction to the Donbass elections was predictable. Source: TASS

RBTH presents a selection of views from leading Russian media on international events, featuring analysis of the political situation in the wake of the elections held in the self-proclaimed republics in eastern Ukraine on Nov. 2.

The Kommersant newspaper reports that Ukrainian President Petro Poroshenko is obliged to admit that his plan to regulate the conflict in the Donbass region of eastern Ukraine has not succeeded and that the governing coalition of Ukraine, which was formed after the parliamentary elections, must now adopt a new strategy. Kiev now plans to repeal the law granting special status to the eastern regions. Poroshenko's decision is a response to the elections held in the self-proclaimed Donetsk People’s Republic (DPR) and Lugansk People’s Republic (LPR) on Nov. 2, which in Kiev were considered a violation of the Minsk Agreements, according to the newspaper. However, the Ukrainian president made it clear that the possibility of dialogue remains intact: "We will be willing to pass a new law – in the event that all sides return to the implementation of the Minsk Protocol."

The international reaction to the Donbass elections was predictable. The U.S. and the EU started speaking about the possibility of introducing new sanctions against Moscow if it recognized the results of the elections. Finding itself in a difficult situation, Russia, even though it announced that the Donbass elections had taken place, has for now refrained from officially recognizing them. In the opinion of General Director of the Russian Foreign Affairs Council Andrei Kortunov, "For Moscow it is important not to pursue its relationship with the DPR and LPR too far," since any further convergence between Moscow and DPR and LPR will not only increase external pressure on Russia, but will also weaken the "pro-peace party" in Kiev.

The Moskovsky Komsomolets newspaper writes that each side in the Ukrainian conflict is now blaming its opponents for the violation of the Minsk Agreements, and Kiev even says that the law giving the Southeast special status has also been violated. The problem, according to the publication, is that the Minsk Agreements do not say anything about the election date, and the date of Dec. 7, which Ukrainian President Petro Poroshenko had proposed, was not agreed on by the trilateral negotiating committee.

The newspaper cites the Russian Foreign Ministry as saying that, "according to the Minsk Agreements, the aforementioned elections were agreed to be held in the period between October 19 and November 3,” whereas the date of December 7 "contradicts the Minsk Agreements."

Moskovsky Komsomolets writes that everyone sees what they want in the Minsk Agreements. Moreover, the newspaper remarks that out of the 12 points stipulated in the Minsk Agreements only a few have been respected, while the others have either been violated or not implemented at all. This testifies to the general disagreement that reigns among the contracting parties concerning the actions that need to be taken. Moskovsky Komsomolets believes that the main issue now is whether the repeal of the law on special status will mark Ukraine's final exit from the Minsk Agreements, a step that may lead to the renewal of military action.