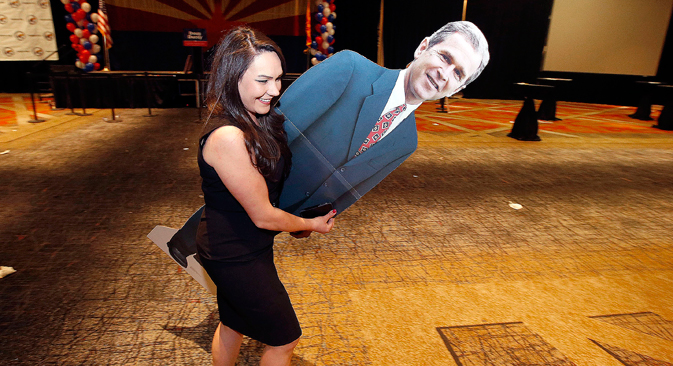 RBTH presents a selection of views from leading Russian media on international events, featuring analysis of Moscow’s cautious reaction to the results of disputed elections in the Donbass region of eastern Ukraine, as well as the likely foreign policy implications of sweeping Republican victories in the U.S. mid-term elections.

Gazeta.ru reports that Russia has not officially recognized the elections in the self-proclaimed Donetsk and Lugansk people’s republics (the breakaway areas in the Donbass region of eastern Ukraine), despite promises made to that effect by Russian Foreign Minister Sergei Lavrov prior to voting. According to the newspaper, the “respect for the will of southeast Ukraine” mentioned in a Foreign Ministry press release does not mean official recognition.

Experts polled by Gazeta.ru are at odds as to why Moscow decided to use such cautious wording. Editor-in-chief of the journal Russia in Global Affairs, Fyodor Lukyanov, explains that full recognition of the elections would also mean recognition of the republics’ legal existence – a step Russia is not ready to take.

Valery Solovei, a professor at the Moscow State Institute of International Relations, thinks the Russian authorities have decided to wait and see what happens after the European Union meets to discuss the sanctions and after the G20 meeting scheduled for mid-November. “The economy is in such a state that Russia does not need new sanctions,” the expert said, attributing Moscow’s decision to pragmatic concerns.

Kamil Bekyashev, head of the International Law Department at Kutafin Moscow State Law University, stressed that if the Kremlin were to recognize the results of the elections, this would not under any circumstances be the same as recognizing the sovereignty of the two self-proclaimed republics.

In Bekyashev’s opinion, the Donetsk and Lugansk people’s republics cannot be compared with Abkhazia and South Ossetia because they do not yet have defined borders, there are no state institutions, and they lack a division of power. However, they may be recognized as independent states in the future if they build statehood that complies with international law, he added.

Kommersant writes that the Republican Party has emerged victorious in the mid-term elections in the United States. President Barack Obama’s opponents managed not only to secure a majority in the Senate and substantially boost their presence in the House of Representatives; they also scored a number of successes in the gubernatorial elections in key states.

According to Kommersant’s experts, the elections demonstrated not so much voters’ discontentment with Obama’s policy as frustration with Congress. However, political analysts predict that the victory enjoyed by the Republicans may cause tensions to rise between Congress and the White House.

“The Republicans are not concealing the fact that they will block the president’s key initiatives, which include raising the minimum wage and tackling immigration reform,” political scientist Richard Frolik told Kommersant.

Foreign policy could be another sticking point between the Republicans and Democrats, Frolik  said. Thanks to the criticism leveled at him by Republicans in Congress, Obama has been indecisive with respect to the Syrian crisis, problems related to Iran’s nuclear program, and the fight against Islamic State (ISIS) militants. Furthermore, the Republicans believe Obama needs to step up pressure on Moscow. Kommersant reports that a group of senators has promised that both chambers of Congress may soon enter into a discussion about a bill to prevent further Russian aggression in Ukraine, which would entail adopting new sanctions against Russia and immediately providing Kiev with military aid.

Novaya Gazeta writes that Russian-American relations are worse than ever as the Ukrainian crisis continues. Besides that, the Republican Party, which emerged victorious in the recent mid-term elections, is traditionally more aggressive in foreign policy, which may force Russian officials to “sound the alarm,” the newspaper writes.

However, Yury Rogulev, who directs the Franklin Roosevelt Center for U.S. Studies at Moscow State University, told Novaya Gazeta that the Republican victory will not seriously alter bilateral relations. U.S.-Russia relations are going through tough times, and the leaders of both countries are afraid to take any steps that would make them worse. According to Rogulev, the Republican Party contains a number of hawks who are calling for a tougher stance against Moscow.

Vladimir Sorgin, director of the Center for North American Studies at the Russian Academy of Sciences’ Institute of World History, told the newspaper that many Russians think Obama’s ratings have started to drop because of his aggressive foreign policy, particularly with respect to Russia.

“But that is fundamentally wrong. The real reason is that the Americans think his policy is too lenient,” Sorgin explained. He is convinced that the Republicans will insist on a tougher line against Russia. The U.S. carries a lot of weight in Western Europe, so new sanctions are also possible, he added. “There are a lot of options: to restrict bank lending, to ban sales of high tech, sanctions against oil supplies. Russia is deeply integrated into the global economy, so it does have something to lose,” Sorgin said.