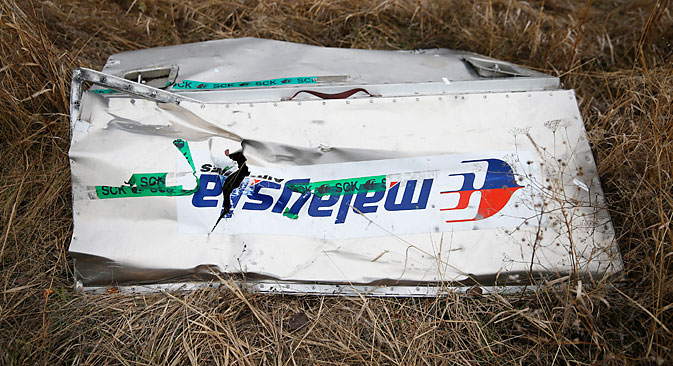 A fragments of the MH-17crashed in the Donetsk Region, Ukraine. Source: Reuters

Journalists and bloggers have accused the station of faking the picture.

During the segment, Leontyev said that Channel One had received the picture from the Russian Union of Engineers, which in turn had received it from a man named George Bilt, reportedly an MIT graduate with more than 20 years’ experience in the aviation industry. According to Leontyev, the image must have been taken by a foreign spy satellite. 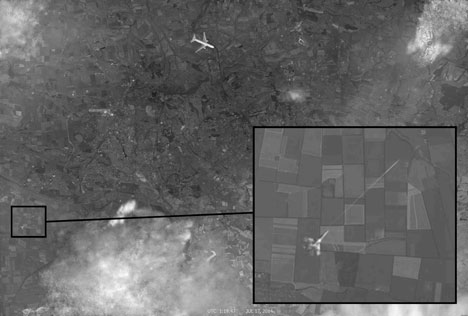 “The Boeing was shot down by a fighter jet that was pursuing it. First, the crew was fired at from a gun, then the cockpit was hit by an air-to-air missile, then the right engine and the right wing were hit by a heat-seeking missile,” Bilt reportedly said in his letter to the Russian Union of Engineers.

Ivan Andriyevsky, first vice-president of the union told the TV program they had studied the photograph and found nothing to suggest that it was fake. “We saw in front of us a satellite image taken from not a very high orbit. Usually, images like these are made for general air and ground reconnaissance. Judging by the coordinates on the picture, we can assume that it was taken from a U.S. or a British satellite,” Andriyevsky said.

Discussing the image with Russian daily Moskovsky Komsomolets, managing director of the Flight Safety consulting and analysis agency Sergei Melnichenko doubted it was authentic – citing in particular the time stamp on the image. The time stamp on the picture is 1:19:47 UTC, Coordinated Universal Time, the same as Greenwich Mean Time. Whereas the aircraft, according to preliminary findings, was downed at 13:19, – 12 hours before the picture was taken.

Russian Ambassador to the UK: We need a credible investigation into MH17

“The time on the picture is clearly marked as UTC. That is, I repeat, Coordinated Universal Time, which is used in aviation. There can be no AM or PM there to avoid any confusion,” Melnichenko said, adding that it was night in Ukraine at the time the image was taken.

In contrast to his colleague Andriyevsky, Russian Union of Engineers chief of staff Vladimir Saluyanov acknowledged problems with the image.

“We have received this image from a U.S. expert and this is what we cite. It is quite possible that the time here is given in the 12-hour format, as is usual in the West,” Saluyanov said, adding that the picture could not be verified since the Russian Union of Engineers had received it by email.

“You are citing aviation [ed: an aviation expert], whereas this is a space image. Why is the time on it the way it is? This question should be addressed to the people who prepared the equipment that was used to take this picture,” he added. Saluyanov went on to suggest that it may have been a technical mistake, adding that “nothing can be ruled out.”

The online publication Slon.ru reported that the image in question had appeared online long before the Russian Union of Engineers received it by email, at least according to Google Images. The same picture – but in better quality – appeared in mid-October 2014 in the forum of the Public Control over Authorities website. According to other reports, the image first appeared on the Internet even earlier, in July 2014.

Reaction from the UN

Farhan Haq, deputy spokesman for the UN Secretary-General, has told journalists that he is unaware whether Russia has submitted the image to the UN. “I shall need to check whether this image has been handed over to the Secretary-General,” Haq said, as quoted by the Russian news agency TASS.

Malaysia Airlines Flight 17 was on a flight from Amsterdam to Kuala Lumpur on Jul. 17, 2014 when it crashed in the part of Ukraine’s Donetsk region controlled by separatists. All the 298 people on board were killed.

This article was combined from reporting by Moskovsky Komsomolets,Slon.ru and Dozhd.