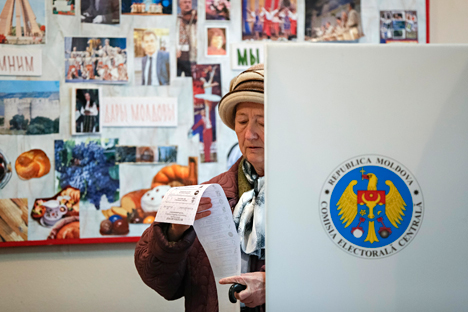 Leading Russian media are covering the parliamentary election in the former Soviet republic of Moldova (located between Romania and Ukraine).Source: Reuters

RBTH presents a selection of views from leading Russian media on international events, featuring reports on the parliamentary elections in the former Soviet republic of Moldova, as well as analysis of the decision by the Egyptian Criminal Court to clear former President Hosni Mubarak of mass murder of protesters during the uprising of 2011.

The popular Moskovsky Komsomolets daily reports on the parliamentary election in the former Soviet republic of Moldova (located between Romania and Ukraine). A total of 19 political parties were running in the polls, held on Nov. 30, however, only five of them have a chance of overcoming the 6-percent threshold required to enter parliament: the Communist Party, headed by former President Vladimir Voronin, the Liberal-Democratic Party, the Democratic Party, the Liberal Party, and the Socialist Party.

The paper points out that the list of successful parties could have also included the pro-Moscow Patria party, which, in a controversial move, was removed from the polls four days before the voting. According to the Moldovan Interior Ministry, Patria had used some $500,000 in undeclared foreign funds to conduct its campaign. The party leader, Renato Usatii, insists it was an act of provocation as the money had been transferred from an offshore firm without the recipient’s consent.

Moskovsky Komsomolets points out that the Patria party, which is critical of the current authorities and the policies they pursue, is considered in Moldova to be pro-Russian. If elected, it planned to form an alliance with the left-wing forces, the Communist and the Socialist parties, whom Moscow had been openly supporting in this election.

The Kommersant daily also covers the Moldovan election. The paper points out that actions taken by Moldova’s incumbent pro-Western authorities during the election campaign have raised doubts inside the country about the legitimacy of this election and concerns in the West about how democratic the voting has been.

Kommersant stresses that this election campaign ended up being one of the most scandal-ridden in the country’s history. There was a malfunction of the electronic register of voters, which the Moldovan Central Electoral Commission had been trumpeting as one of the key guarantees of a fair election. “The automatic system prevented multiple voting by people without a residence permit or a permanent address and students, who could vote at any polling station,” Patria MP Grigori Petrenko told Kommersant. He added that the malfunction of the voters’ register could provide sufficient grounds for declaring the election invalid.

Another Kommersant article looks at the decision by the Egyptian Criminal Court to clear former President Hosni Mubarak of mass murder of demonstrators during the 2011 revolution. The court dismissed all charges “due to the absence of corpus delicti.” The court also acquitted Mubarak of corruption charges over a gas deal with Israel. However, Kommersant points out, the former president will not be released from prison immediately as he is still serving a three-year sentence on embezzlement charges. Yet, the acquittal on the main charge – that of mass murder of protesters – which could have resulted in a life sentence, in effect, signifies a complete political rehabilitation of the former authoritarian ruler.

Photo of the day: Russian sailors in front of the Mistral-class helicopter carrier Vladivostok

An Arabic studies expert with Risk Insurance Management, Teodor Karasik, told Kommersant that the authorities’ timing for releasing the ex-dictator is perfect. “Public sentiment is currently against Islamic extremism, while the Muslim Brotherhood, which replaced Mubarak in power, is now outlawed. Besides, Cairo’s closest partner, Saudi Arabia, has been demanding the former dictator’s release,” Karasik said.

At the same time, Kommersant adds, the court ruling has provoked mass rallies in the Egyptian capital, protesting against a restoration of dictatorship. However, experts point out that these protests are in no position to make the ruling regime falter. On the contrary, they provide the new authorities with an opportunity to get rid of the remaining Muslim Brotherhood activists, who have gone underground, Kommersant concludes.