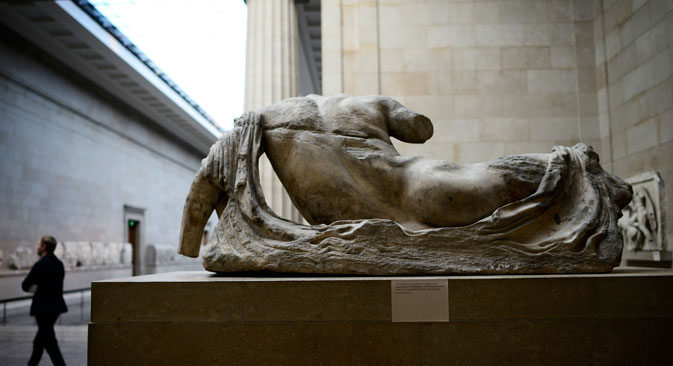 Stripping the Parthenon bare is an issue that has long soured diplomatic relations between the Greeks and the British. Source: Reuters

British museum in no mood for breast-beating as marble and more fleshy mammary glands hit the headlines, says Nick Holdsworth.

A reclining male nude that long ago lost its head, but not the power to turn heads, made waves last week.

The British Museum's loan to the Hermitage in St Petersburg of the headless figure of Greek river god Ilissos, which until the early 19th century graced a frieze on the top of the Parthenon in Athens, prompted a storm of headlines in Russia.

Part of the 'Elgin Marbles', which were shipped off to England by an opportunistic diplomat 200 years ago before being acquired by the British Museum in 1816, the loan to mark the 250th anniversary of the Hermitage, sparked a political storm.

But it swiftly plunged into the controversy, noting that the loan of figure, which will be on display until January 18, had long been contested by the Greeks.

"Transporting the statue is opposed by Athens, where the monument is considered to be cultural heritage plundered from Greece," said the station.

Stripping the Parthenon bare is an issue that has long soured diplomatic relations between the Greeks and the British.

That does not seem to bother the directors of the two museums who back in October cooked up the deal to ship the massive marble to St Petersburg before its dramatic unveiling last week.

For Hermitage head, Mikhail Piotrovsky and British Museum director Neil MacGregor, it was smugness all round.

"The Hermitage director will not comment on his attitude towards the Greeks, something he already announced at a meeting of the Union of Russian Museums," the station said, quoting Interfax news agency.

Mr. MacGregor stressed that the loan of a statue that has never been allowed to leave Britain's shores since it arrived, was a gesture of friendship: "For us it is necessary to share the treasure."

Greek Prime Minister Antonis Samaras was infuriated, Echo of Moscow reported, arguing that the loan torpedoed the British Museum's old argument that it could not return the marbles to Greece because they must not be moved.

The potential for things to go awry for the British Museum was noted in comments posted on the station and other news sites. "The British steal from the Greeks and give to the Russian Federation? A case of buying stolen goods?" was one gem. Another reader noted, as reported by TASS last April, that following Russia's annexation of Crimea, the Dutch had refused to return Scythian Gold that had been sent to Holland on loan from a museum there.

None remarked that given the current parlous state of diplomatic relations between Russia and the West, few in Britain would be surprised if Russian President Vladimir Putin intervened to have the statue return to Athens, rather than London. After all, though headless Ilissos lacks even a couple of digits to stick two fingers up to Lord Elgin, like Mr. Putin, the Greek statue certainly has balls.

A political storm in a teacup was ignited after Claridge's, the swanky London hotel, asked a breast-feeding mum to cover up while she had a celebratory lunch in its public dining room with her mother.

The young mum made her displeasure with the hotel public when she tweeted 'before and after' photos showing herself discretely feeding her tiny daughter and how she looked covered in a large buff-coloured shroud. Before long everyone from Mr. Cameron to his would-be nemesis, UKIP leader Nigel Farage had waded into the argument.

Cultural clashes and consumerism in war and peace

"David Cameron shares the view of the NHS, that breastfeeding is an absolutely natural process," Euromag wrote, following up with a reference to Mr. Farage squarely putting his foot in his mouth by saying he agreed, but suggested nursing mothers could "go sit in a corner."

One wonders what Mr. Putin would do if something similar occurred at the posh National Hotel, just a stone's throw from the Kremlin. Judging by the look on his face last year when a slender, bare breasted young activist from Ukraine's feminist group Femen surprised him while on a visit to Germany, his face lighting up in an enormous grin, he would have no objections. Talking to reporters after the incident, as Moscow News reported at the time, Mr. Putin said: "I liked it, however debates on political issues proceed better when participants are dressed.”

One story that may even go a bit too far for the leader of one of the world's chilliest winter countries, is that of the British nudist village that goes by the German name of Spielplatz, which means playground.

As Lenta.ru reported, the small community of naked inhabitants near St Albans have lived peacefully without a stitch on for 85 years without troubling anyone. Usually discrete, they agreed to let a British documentary film crew into their wooded idyll to help advertise a threat they face from greedy property developers eyeing up not their naked forms, but the rock-bottom prices they charge for houses in the community.

"Given that Spielplatz may soon be pulled into the cost of British real estate, rather than controversy over sexually deviancy, which is so feared there, perhaps it would have been better had they stayed quiet about the price of their homes," Lenta rather drily noted.