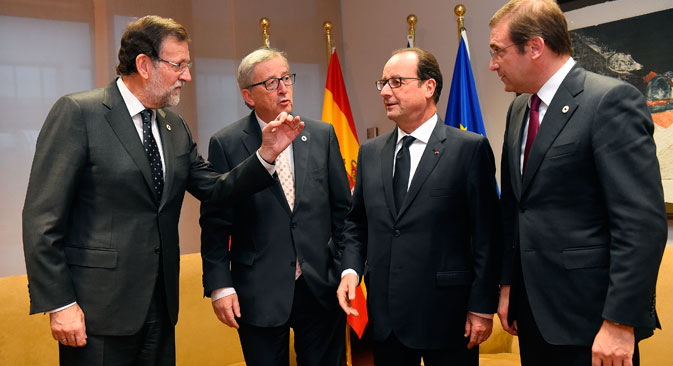 EU leaders gathered in Brussels on Thursday seeking common ground on a long-term strategy to deal with an unfriendly but economically wounded Russia. Source: Reuters

RBTH presents a selection of views from leading Russian media on international events, featuring reports on the results of a two-day EU meeting in Brussels, including analysis of the implications of the new EU sanctions against Crimea, as well as news on Ukraine’s preparation for the introduction of ‘shock therapy’ measures to the country’s economy.

The Kommersant business daily writes that the situation in Ukraine was the main subject of discussion at the two-day EU meeting in Brussels on Dec. 18-19. As had been expected, the EU confirmed a new package of sanctions against Crimea, which Europeans still consider to be Ukrainian territory. The newspaper writes that European leaders agreed to prohibit businesses from investing, acquiring real estate, building infrastructure and providing tourist services in Crimea. Furthermore, European cruise liners will not be allowed to enter the peninsula's ports.

The new restrictions constitute the most serious measure in the EU’s strategy not to recognize Russia's annexation of Crimea, emphasizes Kommersant. Earlier, EU countries had agreed not to issue Schengen EU visas to Russian citizens living in Crimea. According to Kommersant, the Russian Foreign Ministry called the EU's actions "discrimination against Crimean and Sevastopol residents based on political grounds" and threatened to react "accordingly."

It is still difficult to evaluate the consequences of the new sanctions. On the one hand, European companies are already resigned to being prohibited from doing serious business in Crimea, while Russia never really expected European investors and suppliers to participate in the peninsula's economy. However, in the absence of a direct ban, European business had been present in Crimea in one way or another until recently, adds Kommersant.

The sanctions may create a serious obstacle to the restoration of Crimea's infrastructure. There is no way to bypass the sanctions, but a lot will depend on the EU suppliers themselves, concludes Kommersant.

The Moskovsky Komsomolets tabloid newspaper also reports on the EU meeting in Brussels, in which French President Francois Hollande remarked that at present France could not transfer the Mistral helicopter carriers to Russia. "At the moment there is not enough progress, in France's view, to make the deliveries," the newspaper cites Francois Hollande as saying. According to Hollande, the realization of the Mistral contract depends on Russia observing the Minsk peace agreements, but if it fails to do so, France "will draw the necessary conclusions." Hollande also announced that in the course of the summit, leaders of the EU countries had decided not to introduce additional restrictions against Russia itself.

Obama underlined that for now he does not intend to exercise his legitimate right to introduce new restrictive measures. "The document gives the presidential administration additional powers that can be used if the situation requires it," the newspaper cites Obama as saying. Meanwhile, White House Press Secretary Josh Earnest confirmed that Washington is willing to remove the current sanctions if Moscow changes its "aggressive behavior" towards Kiev and carries out its international obligations to regulate the Ukrainian crisis.

Gazeta.ru reports that the Ukrainian government is preparing "shock therapy" for the economy, which will have an impact on the population's living standards. Prime Minister Arseniy Yatsenyuk's cabinet is preparing revolutionary changes in the fiscal code, which may be implemented by the end of this year. This hurry, writes Gazeta.ru, is related to pressure from the outside: Ukraine is being called upon to carry out reforms by almost all the European countries, as well as the U.S. Only after the beginning of these reforms can the country hope to receive the necessary loans.

The changes will affect real estate tax, which will now be levied on all Ukrainians. Furthermore, the military tax, which is taken from salaries, will be extended to the entire year of 2015 and will be increased from 1.5 to 2 percent. Tax on legal entities will also be increased.

According to Gazeta.ru, the austerity measures will also affect pensioners: Their pensions will be frozen until the situation in the country is stabilized. Benefits will be targeted and reduced. The government also intends to cancel student scholarships and funds for hospital food. In the future the Health Ministry aims to switch to a paid healthcare system and require all Ukrainians to purchase insurance.