Press Digest: Is West trying to hurt Russia by driving Ukraine to default? 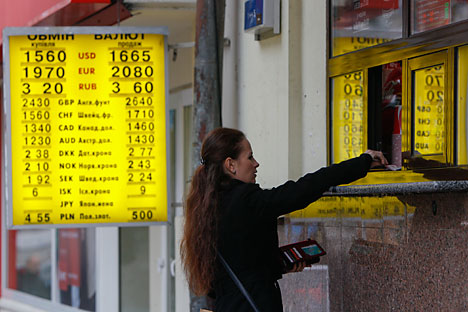 A woman hands over money to a shop employee near a board showing currency exchange rates in Kiev November 12, 2014. Ukraine's central bank said on Wednesday it may soften its policy on mandatory sales of foreign currency income on the domestic market, to encourage companies to bring more dollars into the country. Source: Reuters

RBTH presents a selection of views from leading Russian media on international events, featuring analysis of the consequences of a Ukrainian default on its debt, as well as a report on the latest attempts to restart peace talks in Minsk on the future of eastern Ukraine.

The Nezavisimaya Gazeta newspaper points out that Ukraine is speedily moving towards a default, which is part of the West’s strategy as its main victim will be Russia.

“One gets the feeling that a Ukrainian default is not that unwanted by the West,” the newspaper writes. “For Ukraine, it will be a bracing shower and a release from debts, albeit partial. However, for the EU, a default by Kiev would mean they no longer have to sponsor a chronic debtor. The one who stands to gain the least from this move is Russia, which will have to forgive billions’ worth of loans to Ukraine both from the state and from private companies and banks working with that country.”

“It cannot be ruled out that the IMF is trying to force Russia to aid Ukraine under the threat of a default,” says deputy head of the CIS Institute Vladimir Zharikhin. “In that case, we may be left without the recovery of gas debts and the $3-billion loan issued late last year. In addition, as a result of a social upheaval, there may be a mass influx of Ukrainian immigrants into Russia.”

According to Mikhail Delyagin, head of Russia’s Institute of Globalization Problems, leading Ukraine into bankruptcy is a deliberate policy by the West. “A default will make it possible to obtain Ukraine’s assets at minimal prices or maybe even free of charge: the energy system, the gas transportation system, ports, mineral deposits. Russia will surely write off Ukraine’s huge debts, while the West will do no such thing,” says Delyagin.

The Kommersant business daily reports that the next round of the Minsk talks on the resolution of the conflict in the Donbass region of eastern Ukraine is now due to be held by the end of the month. During a videoconference, both sides, the Ukrainian authorities and representatives of the self-proclaimed Donetsk and Lugansk people’s republics in the east, have confirmed their readiness to continue a dialogue that has come under threat of a complete collapse.

The presidents of Belarus and Kazakhstan have also joined the mediation efforts. However, the warring sides fundamentally differ on the main purpose of the peace process: Kiev seeks to restore its sovereignty over the country’s east, while Donetsk and Lugansk seek conditions for creating independent state institutions.

It is worth noting that during the videoconference, the two sides refrained from the traditional mutual accusations of breaking the ceasefire. According to a senior representative of the so-called Donetsk People’s Republic, Denis Pushilin, all sides expressed their satisfaction at how the truce declared with the OSCE’s assistance from Dec. 9 was holding.

The sides’ latest steps towards each other are the result of active mediation efforts undertaken recently by Russia and the EU, which are not interested in a further escalation of the conflict in eastern Ukraine. President of Belarus Alexander Lukashenko, who recently visited Kiev, has joined in these efforts. On Dec. 22, Kazakh President Nursultan Nazarbayev will be visiting Kiev too. This expansion of the list of intermediaries to include leaders of the former Soviet republics that are among Moscow’s closest partners improves the chances of resolving the Ukrainian crisis.