UK-Russia crossviews: Alps off the menu as Sochi’s charm grows 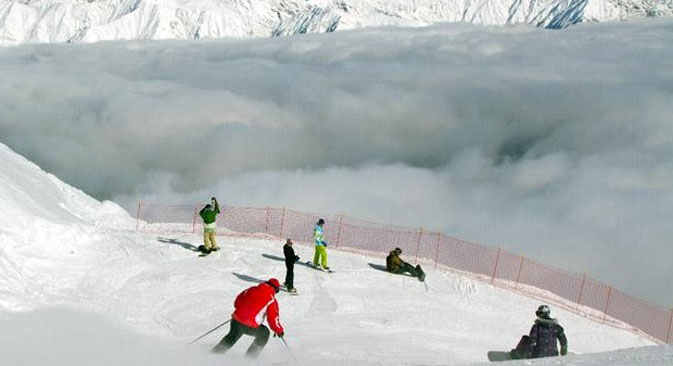 Rouble crisis curbs Russian overseas travel, but does nothing to prevent lavish seasonal celebrations at home.

As UK employees are lazily dragging their heels back into offices this week after the festive onslaught, they could be forgiven for feeling jealous of Russians who are only half-way through a fortnight holiday marathon when the entire country settles into a state of hibernation from January 1 'til the 12th.

Employees throughout the country are entitled to time off to celebrate the New Year, as well as Orthodox Christmas on 7 January, but this year senior government officials, chinovniki, are being short-changed. President Vladimir Putin has cancelled New Year holidays for government ministers because of the unfolding economic crisis, the Guardian notes. “We cannot afford this long holiday, at least this year – you know what I mean,” Putin said in televised remarks New Year’s Day, so we may expect fewer Kremlin bosses in the French Alps over the holiday season. Dmitry Medvedev, the prime minister, also chipped in, advising cabinet chiefs to keep on top of things, “from the first days of the year”.

Their concerns are understandable. The Russian economy is in trouble and little will help unless the price of oil swings back up to the $90-$100 government budget comfort zone. Don't hold your breath. The country is entering recession for the first time in five years, with the rouble one of the poorest-performing currencies last year – second only to the Ukrainian hryvnia and the Bitcoin.

Nevertheless, the party is on despite all economic woes: while the Telegraph is concerned the income of French ski resorts might plummet due to a lack of Russian big spenders, Russian news agency Ria Novosoti reports that record numbers of tourists marked New Year in Sochi, host to last year's Winter Olympics. Sochi's mayor says more than 160,000 came, attracted by the improved infrastructure build before the Games. The resort is also looking forward to more Chinese visitors, as many as two million, after planned direct flights from Beijing and Changzhou are introduced this summer.

For those who stayed at home to meet 2015, the party is in full swing regardless: arriving in Moscow on New Year’s eve I witnessed the cheerful optimism of Muscovites, who crowded trendy bars and cafes alongside Tverskoi and Nikitsky Boulevards for corporate parties and school reunions.  Getting a table in the stylish, new, over-priced and, hence, totally packed bar Fahrenheit was not easy: “Russians will party even if they have to starve the next day”, a friend noted.

Furthermore, #какойкризиc' - which translates as '#whatcrisis', is becoming a popular hashtag in Russia, says the Daily Mail. Pictures of caviar and other festive treats posted under the hashtag are becoming a growing Instagram trend, the tabloid says, in a story about rich Russian showing off their wealth untroubled by sanctions and the rouble's misfortunes.

In such times Russian should be adopting a more prudent approach, the paper sniffs, completely missing the point. Photos of caviar reflect nothing more than the Russian propensity for black humour and a healthy disrespect for any sort of logic. Really wealthy Russians increasingly prefer fish and chips to caviar, as noted in one of my recent articles.

And for those in need of a detox after too much vodka and caviar in London after the holiday indulgencies, the Guardian has a tip: visit a Russian banya.

Banya No.1 is London’s first Russian bath house, “a real promise of good health” in the words of its founder Andrei Fomin. The sauna near Old Street underground in East London combines steam room, honey and salt scrub with pickles, kvass, herring, and… a few more shots of vodka in between sessions. The Guardian sends their correspondent to experience the Russian Hammam and discovers Russia’s secret hangover cure.

A Londoner’s starter guide to the Russian banya

While I'm no expert on hangovers, a banya is definitely the best cure for London's cold: like most Russian-born Londoners who grew up in overheated apartments back home, I find it easy to cope with London winters outdoors, but difficult indoors; it is uncomfortable to work when the room temperature is just half that of the body. A session in a Russian sauna is a joy: it warms the extremities and lifts the spirits at the same time.

If none of this is enough to warm you up, the Guardian has some tips: it’s always better to overestimate, rather than underestimate the cold, says their Russian-born correspondent. Check the forecast and dress accordingly, is her advice to London girls, though there is scant evidence her words are heeded: if I see someone dressed warmly here, you can bet she is Russian. London girls are just too used to expensive energy bills and poorly heated homes and offices to pay any attention to the temperature fluctuations between July and February.

A few shots of vodka to lift spirits, a pair of mittens, fleece stocks, and finally, sex are also advised. I'd add one more thing: spend a few days in Russia over Christmas holidays next year and you’ll see what I mean. Flying back in to +12 after -17 on Red Square is just the ticket.