Press Digest: The deteriorating situation in Ukraine and France’s ambassador to Russia gives his views 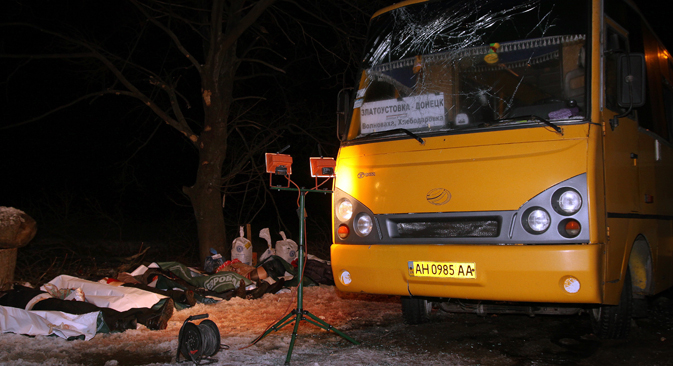 A damaged passenger bus near Volnovakha after it was hit by a shell. Several people were killed. Source: Valentin Sprinchak / TASS

RBTH presents a selection of views from leading Russian media on international events. Today, a bus explodes in southeastern Ukraine as fighting in the region continues to increase, and France’s ambassador to Russia speaks about the relationship between Russia and Europe.

The Moskovsky Komsomolets newspaper reported on a bus explosion near the southeastern Ukrainian city of Volnovakha, which killed 21 civilians. According to the Ukrainian military, the bus came under artillery fire from the pro-autonomy militias. Local residents, however, speculate that the bus may have instead hit a land mine buried along the road. Eyewitnesses say that the field surrounding the road was mined on both sides.

“Looking at the video footage from the scene of the tragedy, it is difficult to suggest that a rocket hit the bus,” the newspaper writes. “The damage entails holes similar to those left by bullets, as well as broken glass, while no scorched earth or broken trees can be seen around it. Furthermore, the footage clearly shows engineers working around the bus. One of them is holding a case with a mine, presumably a MON-50 or MON-90. A mine fragment can also be seen on the threshold of the exploded bus.”

A military expert told reporters that the traces left on and around the bus could not belong to artillery or rockets because there is no evidence of high-explosive damage from a blast wave, and because some of the window glass on the bus is still intact.

Russian daily Nezavisimaya Gazeta writes that the Ukrainian parliament, the Verkhovna Rada, has been holding meetings with the president, prime minister and directors of Ukraine’s law enforcement agencies to discuss the deteriorating situation in the southeast.

The paper writes: “The Ukrainian authorities are preparing for the worst-case scenario in light of the sharp aggravation of the situation in the Donbass.”

The Ukrainian authorities have attributed the increased shelling underway in the region to actions by the Lugansk and Donetsk People’s Republics. In turn, the two breakaway republics are leveling the same accusations against the Ukrainian military. According to the leaders of the republics, the authorities in Kiev are guilty of violating the ceasefire. Local information agencies have published a statement by the Lugansk People’s Republic’s Deputy Defense Minister Vitaly Kiselev saying that the two republics might decide to return heavy artillery to the frontline and have alerted their militias to be on the ready.

Denis Pushilin, the Donetsk People’s Republic’s official delegate to the Minsk negotiations, accused Kiev of taking an “unconstructive position.” He put forward a series of conditions for continuing the peace talks: direct contact on an equal footing between Ukraine and representatives of the Donetsk and Lugansk People’s Republics; the end to Ukraine’s economic and transport blockade of the region; constitutional reform in Ukraine, and the assignation of a special status with broad powers to the Donbass.

French Ambassador to Russia Jean-Maurice Ripert gave an interview to the Kommersant newspaper in which he said that despite the recent difficulties in Russia-EU relations, Paris considers Russia “a fundamental partner and a crucial country in the political, economic, and cultural sphere for the construction of future security in Europe.”

“We do not want to endure a split, or the fact that Russia will move away from Europe or Europe from Russia. I am not bothered by the concept of Eurasia – that is a reality. Russia is the bridge between Europe and Asia. And naturally, Russia belongs to Europe. I think President [Francois] Hollande and Chancellor [Angela] Merkel have shown their will not to endure that split,” Ripert said.

“It is pointless to talk about a Cold War in current conditions. With the exception of the crisis in Ukraine, we are continuing to work together. We are cooperating on the fight against terrorism and on solving the crisis in the Middle East, and we are preparing an international conference on climate issues, which will take place in Paris in December of this year,” Ripert said.