A million and five, Russia by numbers: Doctored births, rally and book 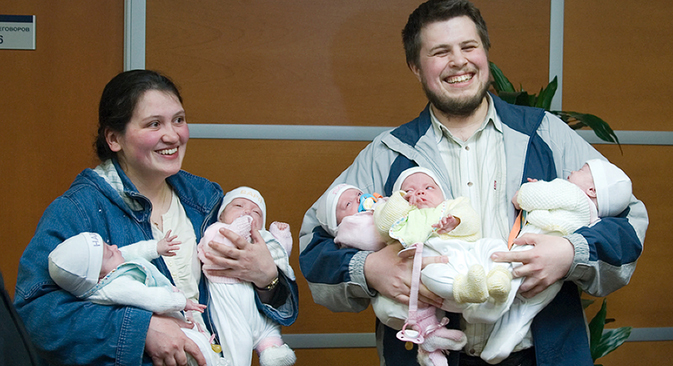 The arrival of the Artamkins with their five daughters: Tatyana, Nadya, Liza, Varya and Sasha at Moscow's Domodedovo Airport. Source: RIA Novosti

The Daily Mail, the British tabloid that loves a heartwarming story, delivers some charming news: the touching story of Russian couple, Dmitry and Varvara Artamkin, returning to Oxford to pay tribute to the doctors and nurses that, seven years ago, helped in the miraculous delivery of five little surprises.

Before the couple's quintuplets were born, doctors in Russia had said some must be aborted to ensure the survival of the rest. The Artamkins ignored them, placing their trust instead in skilled professionals at Oxford's John Radcliffe Hospital. Against all odds, the medical team delivered five healthy girls. Now those little girls, Elizaveta, Alexandra, Nadezhda, Tatiana and Varvara, have returned to meet Dr Lawrence Impey and the team that ensured their safe Caesarean delivery, Nov. 10, 2007. "It was planned like a military operation," Dr Impey recalls. "The stakes were high.”

Live births of such a number of babies are extremely rare and the risks to mother and infants high. In most cases, mothers miscarry or the babies are born too early to survive. According to Hellin’s law - in vitro fertilisation (IVF) aside - quintuplets naturally occur in one in every 65,610,000 births.

IVF or not, hundreds of thousands took to the streets of Chechen capital Monday, in protest at French satirical magazine Charlie Hebdo’s cartoons of the prophet Mohammad, reports the Telegraph. Carrying signs declaring “Hands off the Prophet Mohammad”, demonstrators shouted “Allahu Akbar” (“God is greatest”) the Guardian noted.

Twelve died in Paris as result of this month's attack by gunmen, apparently in revenge for satirical cartoons mocking Islam the magazine had published. Charlie Hebdo's response last week, in its first edition after the slaughter, was to run a cover image of the Prophet Mohammad weeping under the words: “All is forgiven.”

Chechnya’s Kremlin-loyalist leader, Ramzan Kadyrov, denounced the cartoons as offensive, vulgar and immoral.  "We resolutely announce that we will never let anybody insult the name of the Prophet without punishment," he said to the cheering crowds. The freedom of speech had been turned into "freedom of boorishness."

Kadyrov said he expected up to a million people to attend the rally, though figures in reports differ, ranging from tens of thousands, in what sounds like a slip of the pen, in the Guardian’s article, to hundreds of thousands, according to the Telegraph, and as many as 800,000 or 60 percent of Chechnya’s population in what other British press stories called “police reports." Russian newspapers put the figure at over a million.

Freedom of speech cropped up in an odd little social media message last week. The Central Intelligence Agency tweet was in Cyrillic, confusing a lot of followers as well as arousing fears the U.S. spy outfit was under a “From Russia with Love” cyber-attack, according to the Guardian. But the American spooks were simply showing off their intelligentsia credentials by quoting 20th century Russian writer and poet Boris Pasternak.

CIA reveals its participation in the publication of Doctor Zhivago

“I wrote this novel for it to be published and read,” Pasternak’s quotation, and subsequently CIA’s tweet, reads “and that is still my only desire.” In April 2013, the CIA declassified 99 documents describing its crucial role in publishing and distributing Pasternak’s 1957 novel Doctor Zhivago throughout the Soviet Union where it was banned for its “anti-Soviet sentiments.”

The Zhivago project was one of many CIA-supported covert publishing programmes for distributing in Eastern Europe and the Soviet Union outlawed literature by the likes of George Orwell, James Joyce, Vladimir Nabokov and Ernest Hemingway.

In 1958, Pasternak won the Nobel Prize for Literature for Doctor Zhivago, though whether that was part of the CIA's scheme is unclear. It would be 30 years before the novel was published in Russia, where to this day it remains far less popular than in the West.

The full story of Doctor Zhivago’s espionage adventures can be found in a BBC article published last year.