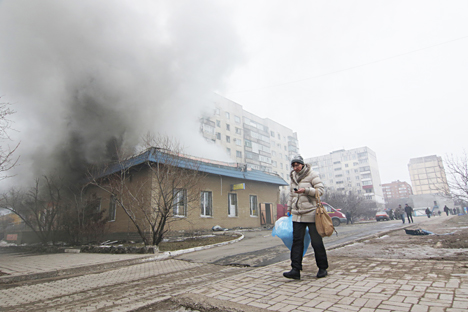 RBTH presents a selection of views from leading Russian media on international events, featuring analysis of the implications of the Jan. 24 rocket attacks on the Ukrainian city of Mariupol for Russia’s relations with the West, as well as reports on an upcoming review of the abolition of the powers of the Russian delegation at the Parliamentary Assembly of the Council of Europe and Moscow’s possible strategy regarding restructuring Kiev’s debts.

Shelling of Mariupol may further complicate Russia’s relations with West

The shelling on Jan. 24 of the coastal city of Mariupol in Ukraine’s war-torn eastern Donbass region, which resulted in numerous civilian casualties, threatens not only to escalate the conflict in Ukraine but also to further complicate Russia’s relations with the West, which are not easy as it is, writes the Vzglyad newspaper.

Speaking in Zurich yesterday, U.S. Secretary of State John Kerry blamed the shelling of Mariupol on pro-autonomy forces and accused Russia of supporting the militants. Kerry urged Moscow to abandon its backing for the Donbass militias, warning that otherwise, “U.S. and international pressure on Russia and its allies will only increase.”

For its part, Moscow has consistently denied any involvement in events in southeast Ukraine. The Kremlin maintains that Russia is not a party to what it claims is an internal conflict taking place on its neighbor’s territory, and would like to see Ukraine overcome its political and economic crisis.

Against this backdrop, diplomats are still struggling to turn the situation back at least to what it was several weeks ago. In the early hours of Jan. 25, Ukrainian President Petro Poroshenko’s press service announced that an agreement had been reached on the need to hold talks between Russia, Ukraine, the U.S. and the European Union in the format used in negotiations in Geneva in the first half of 2014.

PACE to decide fate of Russian delegation at Strasbourg meeting

The powers of the Russian delegation at the Parliamentary Assembly of the Council of Europe (PACE), the humanitarian crisis in Ukraine and the recent terrorist attacks in Paris will be the main topics on the agenda of the PACE winter session, which opens in Strasbourg on Jan. 26, the RIA Novosti news agency reports.

The head of the State Duma’s international committee, Alexei Pushkov, who represents Russia at PACE, said that, in his view, PACE will become divided between an anti-Russian wing and “more realistically-minded” delegations.

In April 2014, because of the Russia’s alleged involvement in the conflict in Ukraine, the Russian delegation at PACE was stripped of its rights to vote, to take part in sessions of the organization’s main bodies and in its monitoring activities. The Russian delegation has consequently refused to participate in PACE until its powers are restored. Under PACE regulations, the powers of all delegations are reviewed at the organization’s winter session.

The centrist newspaper Nezavisimaya Gazeta writes that Ukraine’s insolvency has given Moscow yet another channel for applying pressure on Kiev. This year, Ukraine has to pay some $11 billion in external debts, including $3 billion to Russia – a payment for which the authorities in Kiev have no reserves to make. The International Monetary Fund (IMF) could save Ukraine from defaulting on its debts, but requires Ukraine first to agree with its creditors, including Russia, on restructuring the debt.

Late on Jan. 23, Russian President Vladimir Putin had a telephone conversation with IMF head Christine Lagarde, at which they discussed possible steps that the IMF may take following Kiev’s request to adopt a new long-term credit assistance program, the Kremlin’s press service reported.

In the meantime, Russian experts are warning of the considerable risks the IMF would be taking in allocating funds to a country that is in a state of civil war.

“The issue of restructuring the debt to Russia should be linked to the demand to deescalate the conflict in eastern Ukraine,” says Alexei Arbatov, head of the International Security Centre at the Russian Academy of Sciences’ Institute of World Economy and International Relations. According to Arbatov, the authorities in Kiev bear a share of responsibility for the military escalation of the conflict since the Ukrainian army stands accused of massive shelling of residential quarters, which constitutes a violation of international conventions.