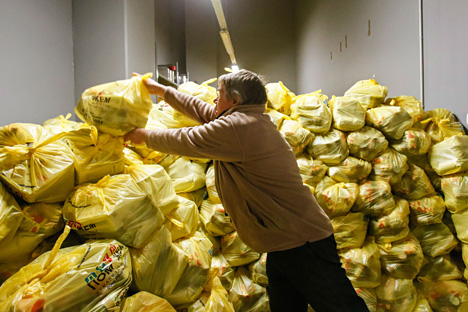 RBTH presents a selection of views from leading Russian media on international events including the chance of a new ceasefire in Ukraine, the fate of two Russians missing in Africa and a new bleak economic forecast.

Kommersant daily reports that Russian President Vladimir Putin has urged the leaders of the two breakaway regions in eastern Ukraine, the Donetsk People’s Republic (DPR) and the Lugansk People’s Republic (LPR), to bring an end to the fighting in the region. In response, DPR Prime Minister Alexander Zakharchenko and LPR head Igor Plotnitsky laid out the conditions under which they would call for a ceasefire. Their primary demand, according to the paper, is that the line of demarcation between the self-proclaimed republics and the Ukrainian government be set at the current front line. Kiev is unlikely to agree to the terms, however, as recent fighting has moved the line to the west.

Alexander Chernenko, a representative to Ukraine’s parliament, the Verkhovna Rada, from the party of Ukrainian President Petro Poroshenko, told Kommersant that the president will insist on the border agreed to in last September’s negotiations in Minsk. “Petro Poroshenko will not agree to a line other than that which was set in September in Minsk, and not to where the front lies now. The president of Ukraine will adhere to the position formulated and offered in the peace plan,” Chernenko said.

Two employees of Russian airline UTAir were kidnapped in the Darfur region of Sudan while on assignment with the United Nations, reports newspaper Rossiyskaya Gazeta. Although the abduction took place on Jan. 29, the information has only recently been made public. Artur Safukov, a representative of the Russian Embassy in Khartoum said that the embassy is coordinating efforts to recover the Russian citizens with the UN and African Union missions in Sudan and has set up a headquarters to monitor the situation. The organization holding the Russians has not been identified, although it has been reported that they have asked for a ransom. The news of the kidnapping was first reported yesterday by Russian news agency RIA Novosti.

Retail trade in Russia expected to fall by 8.2 percent

Russia’s Ministry of Economic Development has submitted a new macroeconomic forecast predicting that retail trade in the country will fall by 8.2 percent this year, according to reporting by news website Gazeta.ru. The fall in retail trade is attributed to the predicted decline in real disposable income. The new forecast expects real disposable income to fall by 6.3 percent and real wages by 9.6 percent. For comparison, last year, disposable income fell by 1 percent and wages rose by 1.3 percent. If retail turnover does fall by 8.2 percent, the drop will be the largest in Russia’s post-Soviet history. According to Russian State Statistics Agency Rosstat, retail trade in Russia has fallen only five times in the past 25 years – in 1991, 1995, 1998, 1999 and 2009. The largest drop was in 1995, when sales fell by 6.2 percent. Gazeta.ru notes that retail sales account for 15 percent of Russia’s overall GDP.