Press Digest: U.S. supply of arms to Kiev is ‘just a matter of time’ 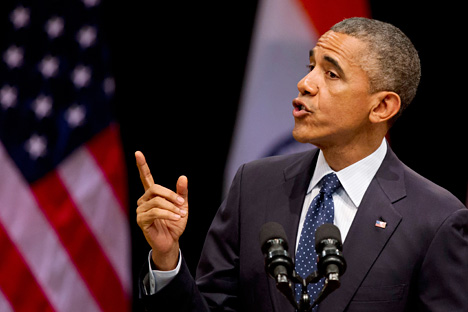 RBTH presents a selection of views from leading Russian media on international events, featuring an opinion piece discussing the likelihood of Washington supplying Kiev with arms, as well as news of a campaign to forcibly cleanse Ukraine’s mass media of Russian shareholders and a frontline report from the town of Debaltsevo in eastern Ukraine.

U.S. ready to cross the red line in battle for Ukraine

The Vzglyad online newspaper has published an opinion piece on the possibility of the U.S. supplying arms to Ukraine. According to the author, the U.S. is currently preparing public opinion for the supply of weapons to Kiev. In a recent statement, American President Barack Obama said that he would continue to adhere to a "bilateral" course: putting more pressure on Russia and strengthening Ukraine. But how will the European Union react to the possibility of arms being shipped to Kiev?

"In exchange for not supplying arms the U.S. will insist on increasing sanctions, thinking that Europe will agree to a lesser evil," Vzglyad writes. "In a few days [German Chancellor Angela] Merkel will be in Washington and it is very likely that there she will have to assume the role of the "dove," persuading Obama, who is surrounded by "hawks," to impose new sanctions on Russia instead of arming Ukraine.

“But all these games that the U.S. is playing with the EU in reality have little meaning, because even if it bends Europe into introducing new sanctions against Russia, Washington will still supply arms to Ukraine. It is just a matter of time."

Vzglyad concludes that the consequences of this step will be catastrophic for Kiev. "Having decided to supply arms, the U.S. understands that it is crossing the red line, the mark that distinguishes the war in Russian perception as a civil war, in which one of the sides enjoys NATO's political and moral support, from a war in which there is international intervention."

The Gazeta.ru internet newspaper reports on the mass purchase of shares in the Ukrainian media that belong to Russian companies. Recently, the Ukrainian company GDF bought a 29-percent share in the Ukrainian TV channel Inter from the Russian channel Perviy Kanal. GDF's management admitted that the deal had a compulsory nature. "The thing is that Perviy Kanal had not participated in managing Inter and did not have an influence on the channel," said GDF's managing director Boris Krasnyansky. "We were forced to accelerate the deal and buy the stake because of political pressure that individual representatives of the government were putting on the media group."

Gazeta.ru also writes that in the near future the Ukrainian parliament, the Verkhovna Rada, will examine a bill concerning a ban on television and radio organizations whose shares belong to Russian citizens or legal entities. At the end of January, Viktoria Syumar, chairwoman of the Committee on Freedom of Speech, said that she would do everything possible in order to ban Russian information products as soon as possible.

"If we look at what is happening from the Ukrainian viewpoint, then the measures being carried out by the government are logical," says a source close to the management of several Russian media outlets. "A real information war is being waged against Ukraine and local Ukrainian TV channels and legislative organs are being forced to look for a commensurate response. That is why Russian shareholders are being squeezed out of the Ukrainian mass media. This is a result of the confrontation in the information sphere."

The business daily Kommersant publishes a special reportage from the government-held town of Debaltsevo in Ukraine's Donetsk Region, which for the last several days has been involved in a battle and is now being shelled daily. The correspondent observed how the military has been trying to evacuate the local residents, many of whom have long moved from their apartments to the buildings' basements.

"Each day the shelling begins exactly at six in the morning, and the blasting continues every hour, even though there are practically no soldiers left in the town," local residents say.

"There is no gas, no water, no electricity," continue other residents. "We must take water from puddles for the toilet. Look at us – people are turning into living ruins, we live as if we were in besieged Leningrad or Stalingrad."

Debaltsevo’s town hall had earlier housed a Russian-Ukrainian Center for the control and coordination of the ceasefire and the establishment of the demarcation line. But at the end of January the Russian officers moved to nearby Soledar (40 miles from the town). Major General Alexander Rozmaznin, who heads the Ukrainian half of the center, says that the move was motivated by security issues. "If our Russian colleagues had remained where they were, no one would have dared to shell Debaltseve," says Rozmaznin. "But I believe that the potential of our collaboration will not be exhausted, if the next round of negotiations in Minsk ends successfully."

The Ukrainian officers have been using their Russian colleagues to make agreements with representatives of the self-proclaimed Donetsk and Lugansk people’s republics about temporary suspensions of fire in order to evacuate civilians or other humanitarian missions. Such an agreement was reached on Feb. 3, and for several hours in the first half of the day the town was not shelled, even though shots were heard a few miles away. In the neighborhood of Uglegorsk clashes continued all day.