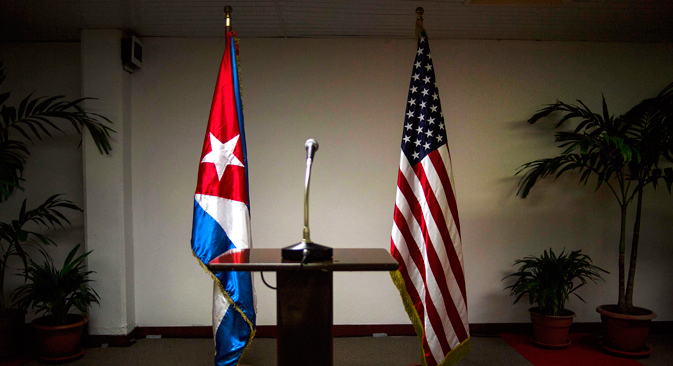 The U.S. Senate Committee on Foreign Relations has opened hearings examining the potential impact of the restoration of diplomatic ties with Cuba. Source: AP

RBTH presents a selection of views from leading Russian media on international events, featuring a comparison of Washington’s positions vis-à-vis Russia and Cuba amid a thaw in ties with Havana, as well as a preview of a meeting of NATO defense ministers in Brussels and analysis of a report by a U.S. newspaper accused of being a ‘provocation’ to force Russia to give up its support for Syrian President Bashar al-Assad.

Normalization of relations with Cuba still a long way off for U.S.

The Russian daily Nezavisimaya Gazeta has drawn a comparison between the U.S. embargo against Cuba and sanctions against Russia.

The U.S. Senate Committee on Foreign Relations has opened hearings examining the potential impact of the restoration of diplomatic ties with Cuba.

So far a restrained approach to Cuba prevails in the Republican-controlled Congress while, conversely, there is a resolute mood to punish Russia even harder, writes Nezavisimaya Gazeta.

Press Digest: U.S. supply of arms to Kiev is ‘just a matter of time’

In the meantime, not everybody in Washington sees anti-Russian sanctions as efficient enough. Furthermore, a group of American senators representing both parties has written a letter to President Barack Obama, admitting that sanctions alone are unlikely to restrain Russia in Ukraine.

“As such, Ukraine needs an immediate infusion of effective defensive military equipment and financial aid to thwart Putin’s naked aggression.”

Boris Martynov, an expert in American-Cuban relations and Deputy Director of the Institute of Latin America of the Russian Academy of Sciences, believes that relations will be smooth, but one should not expect any breakthrough.

"There is a lot of talk around the future of U.S.-Cuban relations in the expert community now," Martynov said.

"Some believe that Cuba will become something of a new American state. Others say that there is no chance for normalization at all and relations will continue to be ragged. I think the truth lies somewhere in the middle."

Online newspaper Vzglyad collated the responses of Russian experts to a report that Saudi Arabia is attempting to use oil prices as leverage against Russia over Syria. On Tuesday, the New York Times reported that that Saudi Arabia may cut oil production if Russian authorities abandon their support for Syrian President Bashar al-Assad.

Alexei Pushkov, head of the International Affairs Committee of the Russian State Duma, took to Twitter to address the allegations, calling the report “a canard.”

"There have been no negotiations on cutting oil production by the Saudis in exchange for Moscow’s refusal to support Assad, it’s a canard," Pushkov Tweeted.

Alexander Ignatenko, a political analyst and the president of the Institute of Religion and Politics, went further in his response. "This is an act of provocation aimed at destabilizing relations that may arise between the Russian Federation and the kingdom, with Saudi Arabia's new king having taken the throne," Ignatenko said, according to Vzglyad.

Meanwhile, Deputy Director of the Institute of Oriental Studies of the Russian Academy of Sciences, Vladimir Isayev, said that such negotiations make no sense to Russia.

"If we weigh all the pros and cons, it has only one advantage – a short-term increase in oil prices," he told Vzglyad.

The Kommersant business daily reports on a meeting of NATO defense ministers scheduled to take place in Brussels on Feb. 5, with relations with Russia and the conflict in Ukraine the main items on the agenda.

One of the newspaper's NATO sources reminded the reporter that the possibility of Russia joining NATO if Moscow so desires was once a topic of serious discussion in the alliance. Now mutual trust has been undermined, and it is unclear how to restore it.

"Moscow is convinced that the West wants to encircle and weaken Russia, while NATO is just looking for an excuse to engage in a fight," Kommersant's source said.

Russian authorities are of a different opinion, however; Foreign Minister Sergei Lavrov has previously claimed that the alliance had chosen the path of confrontation and is incapable of overcoming Cold War stereotypes.

The newspaper's NATO sources disagree, saying that Russia "is destabilizing the situation in Ukraine." According to NATO, Moscow continues to supply the pro-Russian rebels of Donetsk and Lugansk people's republics with heavy weapons, while "hundreds of Russian troops" are stationed in Ukraine.

Ukraine is not the only concern for the alliance; NATO is closely watching the intensified activities of Russian military aircraft in international airspace.

The number of flights by Russian fighters has increased by 400 percent during the last few months, NATO's senior representative told Kommersant.

According to the Russian Defense Ministry, all flights are "conducted in accordance with international airspace regulations, without violation of other states’ national borders and at a safe distance from the flight paths of civilian airplanes."

Considering the list of new threats, the defense ministers will discuss in Brussels the details of plans for a network of command centers in Estonia, Lithuania, Latvia, Poland, Bulgaria and Romania, Kommersant writes.