Anna Sorokina
Based on Interfax 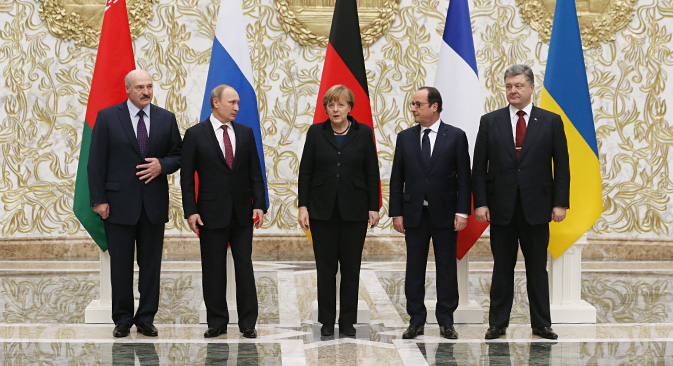 The meeting of the French, German, Russian and Ukrainian leaders in the Belarusian capital Minsk. Source: Kontantin Zavrazhin / RG

The leaders of Russia, Ukraine, France and Germany have agreed on a comprehensive ceasefire in the Donetsk and Lugansk regions starting 00:00 a.m. Kiev time on Feb. 15, in line with a document outlining measures to enforce the Minsk agreements.

After a 16-hour-long negotiation in Minsk, the capital of Belarus, the leaders of France, Germany, Russia and Ukraine reached an agreement to bring peace to the Donbass region of eastern Ukraine.

The parties to the conflict have agreed to begin a ceasefire at 00:00 on Feb. m15, Russian President Vladimir Putin told reporters after the meetings ended.

The Minsk Agreements, which were signed in the Belarusian capital on Sept. 5 and 9, 2014, included terms for a ceasefire, the withdrawal of heavy arms, Kiev's approval of a special status for the Donetsk and Lugansk Regions, amnesty for the militias, as well as the creation of a monitoring group that would observe the cessation of military activities. The agreements were never fully implemented.

"The second position, which I view as very important, is the withdrawal of heavy weapons from the contact line existing today by the Ukrainian forces and from the line set in the Minsk agreements of Sept. 19, 2014 by the Donbass militias," Putin said. "We are expecting all sides [to the conflict] to exercise restraint in the forthcoming period until the complete ceasefire is attained.”

The enforcement of the Minsk agreements reached on Feb.12 envisions a constitutional reform in Ukraine, which must take into account the legitimate rights of the Donbass residents, Russian President said:

"There is a set of measures related to the further political settlement, and it includes several positions. First, this is a constitutional reform, which must take into consideration legitimate rights of the people living on the Donbass territory."

French President Francois Hollande called the agreement “a comprehensive political solution,” according to France 24. "This is a relief for Europe and a hope for Ukraine," Hollande said. The French president confirmed that the sides had managed to reach "a global agreement" on a number of contentious issues in Minsk. "There is still a lot to be done for settling the conflict, but this is a real chance to improve the situation [in Ukraine]," he said.

Ukrainian President Petro Poroshenko said that the meeting was quite tense.

"It was not easy. In fact, different unacceptable conditions, including retreat and surrender, were put forth to us. But we did not bow to any ultimatums and firmly stood by our position that a ceasefire should not have any preliminary conditions, " Poroshenko told reporters.

"The ceasefire will be accompanied by the withdrawal of heavy armaments, heavy artillery systems with calibers larger than 100mm. It has been agreed to pull the artillery back from the "Minsk line" held by the illegal armed units and the actual line held by the Ukrainian Armed Forces to the distances of 25 kilometers. In all, the buffer zone will be 50 kilometers [31 miles] wide," Poroshenko said.

Self-proclaimed Donetsk People's Republic leader Alexander Zakharchenko has put the entire responsibility for a possible breach of the agreements on Kiev.

“The whole responsibility for any possible violation of the provisions of this memorandum will rest upon Petro Poroshenko," Zakharchenko told reporters.

German Foreign Minister Frank-Walter Steinmeier is hopeful that both sides in the Ukrainian conflict will abide by the agreements secured at the Minsk summit.

#Steinmeier:We expect that until ceasefire takes effect, both sides will refrain from doing anything that could jeopardize #Minsk agreement.

The German foreign minister described the talks in Minsk as "extremely difficult", expressing hope that both sides treated this meeting seriously.

The declaration of the Russian, Ukrainian and French presidents and the German chancellor in support of the Complex of Measures on the implementation of the Minsk agreements adopted on February 12, 2015 has been published on the Russian presidential website.

Here is the text of the Declaration:

- President of Russia Vladimir Putin, President of Ukraine Petro Poroshenko, President of France Francois Hollande and Chancellor of Germany Angela Merkel confirm the full respect of the sovereignty and territorial integrity of Ukraine. They are strongly convinced that a peaceful settlement is the sole option. They are fully ready to take any possible measure both separately and jointly in pursuing these goals.

- In this context the leaders approve the Package of Measures on the Implementation of the Minsk Agreements adopted and signed in Minsk on February 12, 2015 by all parties that signed the Minsk Protocol dated September 5, 2014 and the Minsk Memorandum dated September 19, 2014. The leaders will contribute to this process and use their influence over relevant parties in order to assist the fulfillment of this Package of Measures.

- Germany and France will give technical support for the restoration of a segment of the banking system in the regions affected by the conflict through the creation of an international mechanism of assisting the payment of social benefits.

- They also support the trilateral negotiations between the European Union, Ukraine and Russia in order to develop a practical solution to the issues that deeply worry Russia, concerning the implementation of the Ukraine-European Union Association Agreement.

- The leaders are still committed to the idea of creating a common humanitarian and economic space from the Atlantic to the Pacific Ocean on the basis of full respect for international law and the OSCE principles.

- The leaders will remain committed to the implementation of the Minsk accords. To achieve this goal they agreed to create a control mechanism in the Normandy format that will organize regular meetings as a rule at the level of senior officials from foreign ministries.