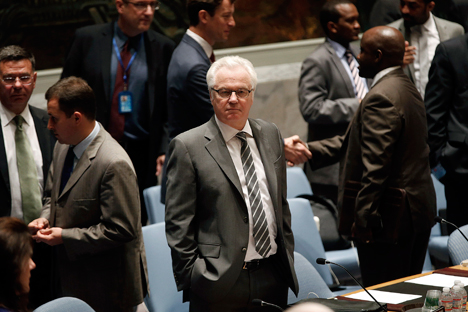 According to Russia's Permanent Representative to the United Nations Vitaly Churkin, the adoption of the resolution testifies to the ability of the international community to work together in the fight against global threats. Source: Reuters

The resolution represents Russia’s first significant diplomatic success at an international level since the beginning of the conflict in Ukraine and the subsequent breakdown in relations with the West.

The United Nations Security Council on Feb. 12 unanimously approved a Russian-sponsored resolution on measures aimed at depriving terrorists from the Islamic State (ISIS), Jabhat al-Nusra and other Al-Qaeda-linked groups of financial income.

The resolution represents Russia’s first significant diplomatic success at an international level since the beginning of the conflict in Ukraine and the subsequent breakdown in relations with the West.

According to Russia's Permanent Representative to the United Nations Vitaly Churkin, the adoption of the resolution testifies to the ability of the international community to work together in the fight against global threats.

Where does ISIS get its money?

A key source of financing for ISIS is robberies and ransoms. Terrorists collect "an Islamic tax" (a tax on the refusal to accept Sunni Islam) in the occupied territories in Syria and Iraq. ISIS also receives money from private donors from Persian Gulf States. The illegal trade in oil from captured fields has also become an important source of income for Islamists. In the fall of 2014, ISIS controlled 11 oilfields, as well as oil processing enterprises in Syria and Iraq. Experts estimate the daily income of extremists from illegal sales at 2-3 million dollars.

The resolution underlines that purchases of oil from ISIS, Jabhat al-Nusra and other extremist organizations are illegal, and those involved in such activities must to be brought to court as accomplices of terrorists.

The UN’s special sanctions committee is to consider immediately the question of adding people and organizations which participate in such operations to its list.

The Security Council has also demanded that all states take measures toward the suppression of trade in objects of "archaeological, historical, cultural, scientific and religious value" which have been taken out of Iraq since August 6, 1990 and from Syria since March, 2011.

As Churkin noted, the UN resolution establishes a legal foundation for fighting against the financing of ISIS.

"How conscientiously countries will base their actions on this legal foundation depends significantly on how soon we will be able to undermine the financial foundations of terrorist activity in the Middle East through collective efforts " said Churkin.

U.S. Ambassador Samantha Power described the resolution as part of "a comprehensive strategy to degrade and ultimately destroy" the Islamic State group, reported the Associated Press.

Power said the strategy also includes coordinated military operations by many nations, pointing to attacks that have knocked out oil fields, refineries and other infrastructure, as well as the recapture of the Syrian town of Kobani.

"As a result of these and other efforts ISIS is having a harder time generating new funds needed to carry out its operations," Power said.

Both Iraq and Syria welcomed the adoption of the resolution. "This is the most comprehensive resolution addressing the issue of terrorism," Syria's U.N. Ambassador Bashar Jaafari told AP reporters.

Based on material published by TASS, the Associated Press and RIA Novosti.