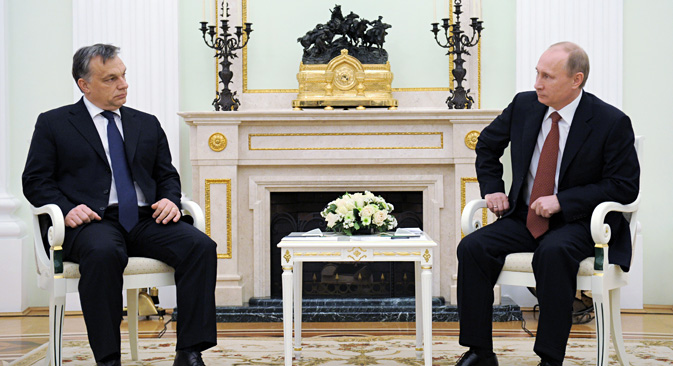 RBTH presents a selection of views from leading Russian media on international events, featuring analysis of Russian President Vladimir Putin’s visit to Hungary, reaction to the imposition of a fresh round of EU sanctions against Russia and the unrecognized republics in the Donbass region of eastern Ukraine, and a report on the repeated violations that are endangering the truce that came into force there on Feb. 15.

The current visit of Vladimir Putin to Hungary is only the Russian president’s third visit to the EU since the beginning of the Ukrainian crisis, which gives it a special, symbolic meaning, writes online newspaper Gazeta.ru.

The main stated purpose of Putin’s visit is to discuss Russian-Hungarian cooperation in the energy sector. In particular, the parties will discuss the possible participation of Hungary in the Turkish Stream project to establish a hub in Turkey for supply of Russian gas, which has replaced the South Stream pipeline to Central Europe via the Black Sea and the Balkans, canceled in December 2014.

Although Hungary backed the EU sanctions against Russia, Prime Minister Viktor Orban was critical about the necessity of such action and said that Europe had "shot itself in the foot" with this move.

However, such a policy is explained by the desire to put pressure on the large European countries in Hungary's own interests, according to the experts interviewed by Gazeta.ru.

Most of the agreements to be signed during the visit relate to bilateral economic cooperation and educational programs and are technical in nature, said Hungarian political scientist András Rácz, of the Finnish Institute of International Affairs. According to Rácz, Orban is pursuing a multi-vector policy by maneuvering between Russia and the EU.

However, the visit is important for both leaders – for Orban as an opportunity to show himself as an independent politician, for Putin – to demonstrate that, despite the sanctions, there are countries in the heart of Europe where he is welcomed, Rácz said.

According to Yury Kvashnin, the head of the EU studies sector at the Institute of World Economy and International Relations in Moscow, Orban faces strong opposition in Hungary, where his pro-Russian sentiment is not welcomed.

The truce in the Donbass region of eastern Ukraine was violated more than 100 times on the second day since the ceasefire came into effect, the RBK daily has reported. This has led to the postponement of the second stage of the peace plan – the withdrawal of heavy weapons.

The situation remains tense around the small town of Debaltsevo, a key railway hub that – according to the Minsk agreement – should remain under the control of Ukraine. But representatives of the self-proclaimed Donetsk People's Republic say the town should be considered theirs and blame the Ukrainian military for breaking the ceasefire.

The situation in Debaltsevo will complicate the implementation of the Minsk agreement, but the military confrontation cannot be resolved in the near future, because neither of the sides has the advantage needed for a military victory, Russian military expert Alexander Khramchikhin said.

According to Ukraine's National Security and Defense Council spokesman Andriy Lysenko, the rebels have also violated the truce near the city of Popasnaya in the west of the Lugansk Region.

RBK adds that the sides are breaking the truce dozens of times more than they did after the first ceasefire was announced on September 5.

Many European deputies are demanding an end to the rhetoric of sanctions and that partnership with Russia be resumed as soon as possible, the daily broadsheet Izvestia reports.

However, the EU has extended its sanction list against Russians as well as representatives of the unrecognized Lugansk and Donetsk people's republics, adding another 19 people and nine entities to the list on Feb. 16.

This is happening for the second time; another round of sanctions was imposed on Russia after the first Minsk accord was signed in August 2014, first deputy chairman of the Federation Council Committee on Foreign Affairs Vladimir Dzhabarov told Izvestia.

The Russian Foreign Ministry reacted with bewilderment to the introduction of the new sanctions after the signing of the agreement by the Russian, Ukrainian, German and French leaders on Feb. 12.

"I hope the Minsk agreement will be abided by, so the sanctions can be reconsidered. We need to do everything for Russia to be a partner of the EU, rather than its enemy," Bulgarian Member of the European Parliament Andrey Kovatchev told Izvestia.