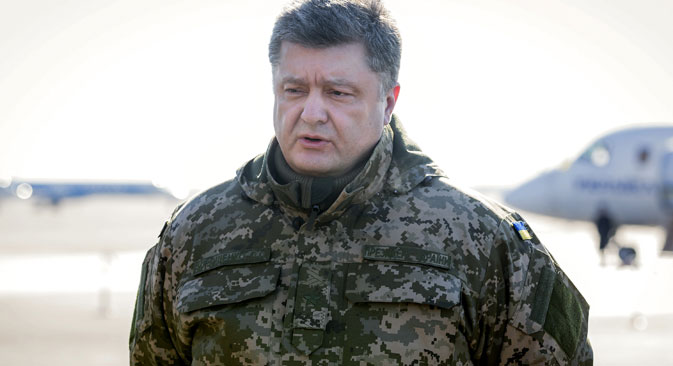 RBTH presents a selection of views from leading Russian media on international events, featuring analysis and reports on the situation after Ukrainian troops withdrew from the contested town of Debaltsevo, a review of an international conference on global extremism in Washington, and the presentation of a new song and video by controversial Russian punk group Pussy Riot.

Ukrainian President Petro Poroshenko has admitted Kiev's inability to hold the key town of Debaltsevo in the Donbass region of eastern Ukraine and announced the withdrawal of the Ukrainian army from the area, the Kommersant daily reports. The president’s statement about completing a "planned and organized" pullback from Debaltsevo came as a complete surprise and contradicted previous comments by both the General Staff and the Ukrainian military in the conflict zone, the newspaper writes.

According to Kommersant, the battle for Debaltsevo – the worst in the Donbass in recent months – could have far-reaching consequences for Ukraine; as the military withdrew from the town, a conflict escalated between the General Staff and field commanders who tried to shift responsibility for the failure onto each other.

Watch the video: Fighting in Debaltsevo threatens ceasefire in Ukraine

In addition, deputies from the Ukrainian leader’s party, the Petro Poroshenko Bloc, have started openly talking about the defeat in Debaltsevo, blaming it on the Ukrainian Security Service, the newspaper writes.

"The problem is that the Ukrainian authorities are looking not for a way out, but for those who are guilty," Kiev political analyst Mikhail Pogrebinsky told Kommersant. According to him, the defeat in Debaltsevo will be "a blow to the reputation of the Ukrainian army and the positions of its leadership, which failed to develop tactics and strategy."

"Petro Poroshenko's claims that there was no encirclement, but that the troops withdrew, indicates that the truce started in surrender mode," added another expert, Dmitry Dzhangirov.

Despite the removal of the main obstacles to the implementation of the Minsk agreement, the confrontation in Debaltsevo may complicate relations between Moscow and the West even further.

In case of further escalation, both EU High Representative for Foreign Affairs and Security Policy Federica Mogherini and U.S. Vice President Joseph Biden have promised to impose new sanctions on the Russian Federation, the newspaper says.

The experts interviewed by the RBK daily suggest that the sides will start implementing the Minsk agreement following the withdrawal of Ukrainian troops from Debaltsevo to buy time.

For Kiev, withdrawal from Debaltsevo had previously meant giving up territory that had not been contested for a long time, Ukrainian political analyst Mikhail Pogrebinsky told RBK.

Now both the Ukrainian authorities and rebels are still interested in a temporary truce, but the process will be difficult, especially in the absence of effective control, Pogrebinsky said.

"The Minsk agreement is a realistic scenario, a temporary 'freeze' of the conflict, all the concerned capitals will be able to breathe easier with the ceasefire and withdrawal of weapons in effect," Russian political analyst Alexei Makarkin said.

According to the expert, it is impossible to say how long this "freeze" will last, especially in the absence of strict international control. "Now both sides – Ukraine, the breakaway republics and Russia – are proceeding from the assumption that the economy of their opponent will collapse sooner," said Makarkin.

The Nezavisimaya Gazeta daily sums up the results of an international conference on combating violent extremism – attended by the leaders of the American public associations and representatives of the foreign ministries of more than 60 countries – which has concluded in Washington.

According to the newspaper, the forum was dedicated to the fight against all forms of extremism, but first and foremost the United States wants to prevent the emergence of home-grown terrorists, known as "lone wolves.” This kind of extremism has become the biggest threat to the West, the newspaper points out.

According to U.S. President Barack Obama, who spoke at the conference, it is important to rely on moderate Muslim circles that could protect "vulnerable" young people from the temptation to join the ranks of terrorist groups such as Islamic State (ISIS), or become "lone wolves" that sympathize with them.

It is the attacks by the latter in Sydney, Ottawa, Paris and Copenhagen that have revealed the most vulnerable spots in the security systems of Western countries, which, after the attacks of September 11, 2001 in the U.S., were mainly aimed at the prevention of major attacks organized from abroad, Nezavisimaya Gazeta writes.

In addition, the Obama administration plans to create a small unit within the State Department – the Center for Strategic Counterterrorism Communications – to combat ISIS' propaganda machine. It will serve as a coordinating node that will join the forces of not only the Pentagon, the Department of Homeland Security and intelligence agencies, but also foreign allies in the fight against terrorism, Nezavisimaya Gazeta says.

The song, called “I Can’t Breathe,” is inspired by protests against the cruelty of the New York Police. “I can’t breathe” were the last words of a black man named Eric Garner, who died last summer after New York Police Department officer placed him in an apparent chokehold. This phrase became the main slogan for protests that erupted in New York in December 2014 after a court acquitted the officer of wrongdoing.

In the video, Pussy Riot members Nadezhda Tolokonnikova and Maria Alyokhina are buried alive whilst wearing the uniform of the Russian riot police (OMON).

Pussy Riot recorded the song during the protests in New York in December with American punk pioneer Richard Hell and Russian bands Jack Wood and Scofferlane.

“We don't feel like strangers in relation to American politics,” said Tolokonnikova and Alyokhina in an email interview with Meduza. “We spent quite a lot of time in the U.S. last year, and met very different people – musicians, prison NGO workers, activists of Occupy Wall Street and the former Secretary of State Hillary Clinton, film directors, journalists, supervisors in prisons and inmates of these prisons, police and protesters, senators and congressmen, graffiti artists and directors of big art institutions….”

“A number of the problems arising in the state system of the U.S. is reminiscent of some problems in Russia — for example, the extremely high number of prisoners and the low level of conditions in prisons… We participated in the New York protests and wrote the song ‘I Can't Breathe,’ having been inspired by them, but going there, to the streets of New York, we over and over again understood more and more that the words ‘I Can Not Breathe’ written on each banner — they are about us. It’s us, who can't breathe, who can't go onto the streets and declare a protest against the lawlessness, cruelty, and lies that are taking place… We remembered the victims of the war in eastern Ukraine, those buried in Pskov… We made this song, inspired by American protest, in hope for a protest in Russia.”