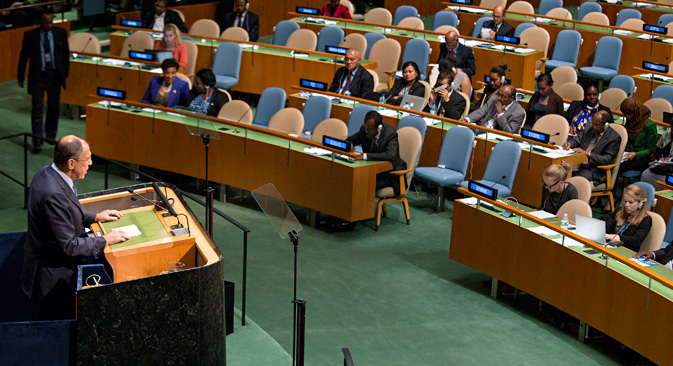 RBTH presents a selection of views from leading Russian media on international events, featuring a report on Russian Foreign Minister Sergei Lavrov’s speech at a special meeting of the UN Security Council, analysis of the progress being made in implementing the latest Minsk peace agreements on regulating the Ukrainian conflict, and news of debate in the EU on blocking a Russia-Hungary nuclear power deal.

Lavrov: UN Security Council must be given back ‘its role of a leading body for the coordination of collective approaches’

The daily broadsheet Izvestia reports on a special meeting of the UN Security Council in which Russian Foreign Minister Sergei Lavrov participated. The meeting took place in the context of preparations for the 70th anniversary of the end of WWII.

"Since the end of the Cold War, there is no longer a real obstacle to the UN Security Council becoming an efficient platform for rallying collective international will, but the path towards this goal turned out to be much more complicated and winding than it appeared to us a quarter of a century ago," said Lavrov in his speech.

According to Izvestia, the Russian foreign minister mentioned "the bombing of Serbia, the occupation of Iraq […] and the gross manipulation of the Security Council's mandate, which led to devastation and the continuing chaos in Libya" among the numerous examples of the violation of the fundamental principles of the UN Charter.

"It is necessary to take strong measures on getting rid of double standards in world politics, on giving back to the Security Council its role of a leading body for coordinating collective approaches," Lavrov was quoted by Izvestia as saying.

The Kommersant business daily analyzes the current situation in the Donbass region of eastern Ukraine and evaluates the results of the latest Minsk peace agreements ahead of a new meeting of the Russian, Ukrainian, French and German foreign ministers.

In an interview with the All-Russia State Television and Radio Broadcasting Company (VGTRK), Russian President Vladimir Putin stated that if the Minsk agreements are respected, a third peace accord may not be necessary, the newspaper reports.

According to the Russian president, the biggest problem in eastern Ukraine is trust; Putin claims the militants of the self-proclaimed Donetsk People's Republic are ready to withdraw their heavy weapons, while Kiev considers this step premature, pointing to the fact that fighting has not stopped.

Thus, less than two weeks after the signing of the latest version of the Minsk Agreement, the end of large-scale conflict remains its main result, writes Kommersant. However, the reduction in military tension is not being accompanied by political de-escalation; Kiev, the U.S. and some EU leaders regarded the battle for the strategic town of Debaltsevo as a gross violation of the Minsk agreements by the Donetsk and Lugansk “people's republics.” Moreover, Ukrainian President Petro Poroshenko has urged the U.S. and the EU to impose new sanctions on Russia, as well as to assist Ukraine in strengthening its defense capability.

The four-party meeting of foreign ministers to be held in Paris today will be an attempt to avoid further deterioration of the situation, according to Kommersant.

The Expert weekly business magazine suggests that EU regulators may block the multi-billion dollar Russian-Hungarian project for the development of nuclear energy in Hungary. Brussels may respond by imposing a ban or exorbitant fines on the initiative, a move by Hungarian Prime Minister Viktor Orban, who decided to make the nuclear project the central part of his strategy to strengthen political and economic relations with Russia, the newspaper writes.

Expert reminds its readers that at the end of 2014, Russia and Hungary signed documents for the construction of the fifth and sixth units of the Paks Nuclear Power Plant, equipped with Russian-designed reactors. During a recent visit to Hungary, Russian President Vladimir Putin confirmed the consent of Rosatom to finance 80 percent of the project cost.

Related: Atoms for peace without politics

Opponents of the deal have warned that Budapest is taking unjustified financial risks and deepening its energy dependence on Russia, the magazine notes. However, Center for Energy and Security director Anton Khlopkov told Expert that it was "still premature to say that the contract will be ripped up."

As for Rosatom, in spite of the attractiveness of the European market, the cancelation of the Hungarian project will not be a tragedy for the company, as it has a large backlog of orders, according to Khlopkov.

"But it is important not to set a precedent that the Russian nuclear industry can be squeezed out of markets," he said.

Read the opinion: Why today’s Russia and the West cannot understand each other>>>

The views that the West has today of Russia are outdated and need to be corrected, says political analyst Nikolai Zlobin. But it will be nearly impossible to correct them if Russia itself does not stop believing in its own propaganda and does not define its long-term interests.