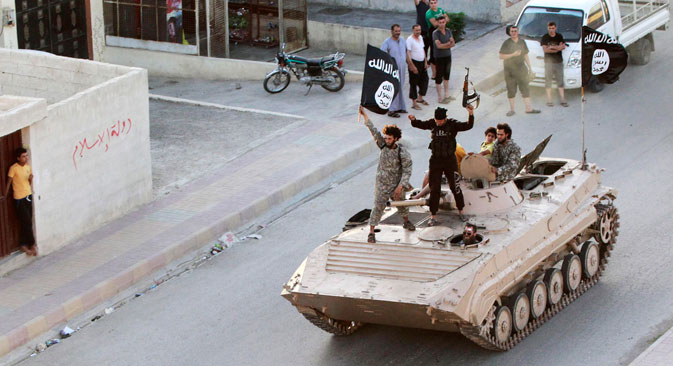 ISIS still poses a threat to Russia, with thousands of jihadists from the former Soviet Union – Russia, Central Asia, and the South Caucasus – currently fighting in the ranks of the radical group. Source: Reuters

The director of Russia’s Federal Security Service has expressed his willingness to cooperate with U.S. security agencies in their fight against ISIS, following a Washington summit on combating terrorism. Russian observers identify differences in strategy and ideological approach as the key challenges to successful anti-terrorist cooperation between Russia and the United States.

The director of the Russian Federal Security Service (FSB) Alexander Bortnikov has expressed his willingness to cooperate with his American counterparts in their fight against the Islamic State (ISIS) radical militant group, following an international conference on combating extremism hosted by U.S. President Barack Obama in Washington on Feb. 17-19.

Russia and the United States "have repeatedly discussed issues of cooperation and came to the conclusion that they should not be politicized," said Bortnikov, commenting on the results of the conference. Bortnikov was the highest-ranking Russian official invited to the event.

"It is important to have an understanding of the need to work together, regardless of political problems," said Bortnikov, whose comments about Russia's readiness to participate in the elimination of the Islamic State radical group (ISIS), which has seized part of the territory of Syria and Iraq, were seized upon by media. "What is happening today is so serious that we need to unite," Bortnikov said.

However, experts note that the joint fight against terrorism today is in deep crisis. Cooperation between Russia and the U.S. is minimal, even though the leaderships of both countries are seriously concerned about the rapid growth of the influence of ISIS.

The danger ISIS poses to Russia

At first glance it may seem that ISIS does not yet pose a direct threat to Russia. "For ISIS, it is more important to spread [its] influence to countries in the Middle East with an absent or unstable political regime," Leonid Isayev, an orientalist and a senior lecturer in the department of political science at Moscow’s Higher School of Economics, told RBTH.

Religion in Russia: What regions believe in Christ, Allah and Buddha

According to Isayev, last year's statements made by representatives of ISIS about their intention to seize Chechnya were nothing more than an attempt at PR.

However, ISIS still poses a threat to Russia, with thousands of jihadists from the former Soviet Union – Russia, Central Asia, and the South Caucasus – currently fighting in the ranks of the radical group.

The problem is that for various reasons it is now difficult for both Moscow and Washington to agree even on the fight against a common threat.

The first reason is the different strategies being pursued by the two nations in respect to the Middle East: "American policy in the Middle East lacks a systematic approach. Having not destroyed al-Qaeda in Iraq, the U.S. switched to Libya, then, having quit what it started, intervened in the Syrian conflict," Isayev said.

At the same time, he says, the Americans are gambling on democratization and actively intervene in the internal affairs of states. The Russian counter-terrorism strategy, by contrast, is based on supporting the existing regimes, regardless of the situation with democracy and human rights in a particular country.

The second reason complicating joint efforts to liberate the Middle East from terrorists is Washington's reluctance to take Moscow as a partner.

"The logic of confrontation forces it to see any cooperation as something undesirable and to weigh carefully whether it is really vital," Suslov said.

The Game goes on: Russia, the USSR and Afghanistan, yesterday and today

"In addition, the parties have different assessments of the causes of the terrorist threat. Many people in Russia believe that the guilt for the emergence of ISIS largely lies with the United States, while the policy that the Americans are carrying out in Syria is a repetition of the experience of the 1980s, when America supported the Afghan mujahedeen in their fight against the Soviet Union."

The re-emerging trend to section the region into spheres of influence also undermines the joint fight against terrorism. "Competition makes it simply impossible to work together, playing into the hands of radical groups," Isayev said

According to Suslov, Bortnikov's remarks about possible cooperation between the countries’ security services indicate that there is an understanding in Washington and Moscow that the current contradictions between them only benefit terrorists.

"This is the first sign that we are entering the phase of 'mature confrontation,' when disagreements on some issues (Ukraine) do not prevent the parties from engaging in dialogue on other issues, and even partially cooperate," said Suslov.