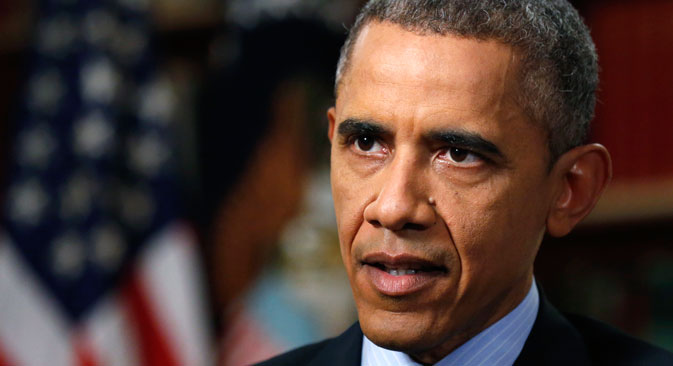 U.S. President Barack Obama speaks during an exclusive interview with Reuters in the Library of the White House in Washington March 2, 2015. Source: Reuters

RBTH presents a selection of views from leading Russian media on international events, featuring reports on the extension of sanctions against Russia by the United States, key discussions over the role of OSCE observers monitoring the ceasefire in eastern Ukraine; and Israeli premier Benjamin Netanyahu's controversial visit to Washington.

Obama extends sanctions against Russia, Europe is ready to add new ones

The Moskovsky Komsomolets tabloid newspaper reports that the U.S. presidential administration has published an official announcement saying that Barack Obama is extending sanctions against Russia for another year.

The U.S. president also spoke with the leaders of France, Germany, Britain and Italy, as well as President of the European Council Donald Tusk, after which the European politicians expressed their readiness to increase their sanctions against Russia in the event of an escalation in the conflict in the Donbass region of eastern Ukraine.

"They confirmed their decisiveness to act quickly and cohesively in order to make Russia pay a high price if there are violations in the Minsk Agreements or if the Russian-backed separatists try to obtain new territories," the newspaper writes, citing the announcement made by the White House following the telephone talks.

Russia, Germany and France back Kiev on OSCE mission in Donbass

The centrist daily Nezavisimaya Gazeta newspaper reports on the results of a telephone conversation between the leaders of Ukraine, Russia, Germany and France on the evening of March 3. The politicians underlined the importance of following the Feb. 15 ceasefire in eastern Ukraine and the process of withdrawing heavy weaponry.

The newspaper explains that in order to implement the Minsk Agreements of Feb. 12 the leaders have backed Ukraine's proposal of deploying OSCE (Organization of Security and Cooperation in Europe) observers "in all points where the ceasefire has been violated."

The OSCE will publish its observers' reports on the violations on a daily basis, which in turn will be sent to the foreign ministries of the four countries. The unrecognized breakaway republics of Donetsk and Lugansk have also agreed to this.

According to Alexander Gushchin, an expert from the Russian Council on International Affairs, the new decisions increase the control of the implementation of the Minsk Agreements, which Kiev aspires to. "The Ukrainian government is seeking to introduce a large peacekeeping contingent, but it will not happen quickly because now the situation regards a compromised version of control by foreign observers – the strengthening of the OSCE in the points that Kiev mentioned," said Guschin. "This moves the conflict to a more or less frozen stage."

Guschin did not exclude the possibility of Russia changing its position on the introduction of peacekeepers.

The Kommersant newspaper reports that U.S. President Barack Obama has quarreled with Israel, America's key ally in the Middle East. Israeli Prime Minister Benjamin Netanyahu's visit to Washington this week turned into an unprecedented scandal, demonstrating that relations between the leaders of the U.S. and Israel have reached the lowest point in their history. Kommersant says that neither Obama nor Vice President Joseph Biden wished to speak to Netanyahu.

"The stonewalling was a result of Netanyahu, who had been invited by Congress, not agreeing his visit with the U.S. presidential administration," explains Kommersant. Moreover, the Israeli prime minister did not conceal his intention to appeal to American legislatures for help, thus bypassing the White House, if he did not reach an understanding with Obama on the Iranian nuclear issue. Before departing for the U.S. Netanyahu had called his visit "a fateful, even historic mission," expressing his conviction that the future of the Jewish state was at stake.

Kommersant remarks that on the one side of the confrontation stand the White House and the Iranian leadership, while on the other - the Israeli Prime Minister and the Republican-controlled U.S. Congress. Bearing in mind that a nuclear agreement with Iran could become Obama's greatest foreign policy victory, the attempt of a key Middle East ally to undermine the nuclear deal with Tehran was perceived in the White House as a stab in the back, emphasizes Kommersant.

Kiev not commenting on arms supplies agreements with foreign countries>>>

Ukraine is fully entitled to defend itself, and therefore there are no grounds for restricting supplies of foreign weapons, the Ukrainian Foreign Ministry said.

Pushkov sees no sign of normalization of Russia-U.S. parliamentary dialogue>>>

There is no sign of a move towards the normalization of Russian-U.S. parliamentary dialogue, according to State Duma International Affairs Committee Chairman Alexei Pushkov.