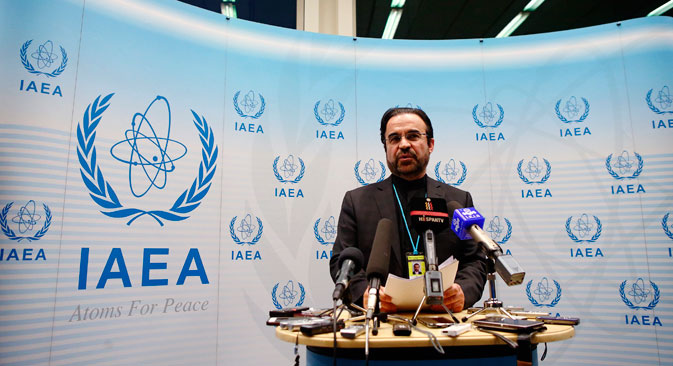 Iran's ambassador to the International Atomic Energy Agency (IAEA) Reza Najafi addresses the media after a board of governors meeting at the IAEA headquarters in Vienna March 4, 2015. Source: Reuters

RBTH presents a selection of views from leading Russian media on international events, featuring analysis of the crucial nuclear talks between Iran and the P5+1, as well as reports on the continuing spat between the U.S. and Russia over alleged violations of the INF Treaty, and a campaign by Bulgaria and Azerbaijan to revive the lapsed Nabucco gas pipeline.

Iran nuclear talks: Everything depends on Washington and Tehran

The Kommersant business daily has run an article ahead of the talks between Teheran and the P5+1 group of six major powers (the U.S., Russia, China, the UK, and France, plus Germany) on the Iranian nuclear issue. By the end of March, they have to sign a political agreement in order to put a "comprehensive" agreement in place in June.

The parties have rolled over the deadline for the talks twice, and experts see the current, third attempt to negotiate as crucial, the newspaper writes.

If the talks fail, the U.S. Congress will impose new sanctions on Iran, which then is sure to quit negotiations. Meanwhile, Kommersant's diplomatic sources, informed about the process of negotiations between the six powers and Iran, are convinced that, with political will, it is "quite possible" to reach a compromise in the time remaining.

OPINION: Russia-Iran deal is about more than nuclear Power

For this, four core issues should be resolved – the number of centrifuges that Iran may possess, the enrichment facility in Fordow, a heavy-water reactor in Arak and the lifting of sanctions against Iran, writes the newspaper.

Both Iran and the P5+1 are interested in the resolution of these issues, the director of the Institute for the Study of Modern Iran, Rajab Safarov, said in comments to Kommersant.

According to Safarov, everything depends on the positions of the two main participants in the negotiation process – Iran and the United States.

"The White House understands that there will be no other chance to resolve the issue in this format in the event of the breakdown of negotiations, which could lead to a serious escalation in the region," said Safarov, who added that Iranian President Hassan Rouhani “is also very interested in the success, because his reputation in the country depends on it."

As U.S. President Barack Obama announces the extension of sanctions against Russia for one more year, Pentagon chief Ashton Carter has threatened to take action against Moscow if it violates the Intermediate-Range Nuclear Forces Treaty (INF), the centrist daily Nezavisimaya Gazeta daily reports.

Carter declared that a violation of the treaty could force the United States to take action on three fronts – in active defense, counterforce capabilities and countervailing strike capabilities, which could include the creation of similar nuclear missile systems, the newspaper reports.

Foreign Minister Sergei Lavrov, in turn, said that the U.S. had not provided Russia with any evidence of violations of the INF Treaty by Moscow, writes Nezavisimaya Gazeta.

According to Alexander Goltz, a military analyst for daily publication Yezhednevny Zhurnal, the competing claims over the INF Treaty floated to the surface as the Ukrainian crisis escalated. "We can only guess at what claims the Americans are presenting to the Russian side," he told Nezavisimaya Gazeta.

"Judging by press reports, their main concern was about the testing of the new warhead for the Iskander missile with a greater range than that allowed by the treaty."

Goltz also recalled that a year ago, chairman of the Joint Chiefs of Staff, Gen. Martin Dempsey, hinted that the United States could deploy submarines with cruise missiles in the Baltic Sea, which is not prohibited by the treaty.

"In view of the downward spiral of the relations between Russia and the United States, such a step cannot be excluded," Goltz concluded.

After losing the South Stream project [to build a gas pipeline from Russia to Central Europe via the Black Sea – RBTH], Bulgaria – supported by Azerbaijan – wants the European Commission to revive another closed gas project – Nabucco, shelved in 2013 due to its high costs, writes news website Vzglyad.

Bulgaria is a loyal member of the European Union; it has met all the requirements for the Third Energy Package [legislation aimed at opening up internal energy markets in the EU – RBTH], and, in particular, it has blocked the Russian project South Stream, the website noted, citing a statement by Prime Minister Boyko Borisov.

However, Bulgaria does not want to be left without gas, and now Sofia is waiting for help from the European Commission to resume the Nabucco project.

Europe has finally settled on a cheaper version of the project: the construction of the Trans-Anatolian Natural Gas Pipeline (TANAP) through Azerbaijan, Georgia and Turkey, followed by the Trans-Adriatic pipeline (TAP) through Greece, Albania and across the Adriatic Sea to the south of Italy, writes Vzglyad.

The crux of the problem is that the route of Nabucco was to pass through Bulgaria, but the country does not feature in the route of the TAP, which aroused concerns in Sofia after the closure of South Stream, the website says.

According to the director of Energy Development Fund, Sergei Pikin, it is most likely that Bulgaria wants to change the route of TANAP through Turkey so that it would resemble the route of the Nabucco pipeline and reach the Bulgarian border. However, the chances of success for Sofia are slim, according to Pikin.