Press Digest: Merkel and Cameron decline invitation for May 9 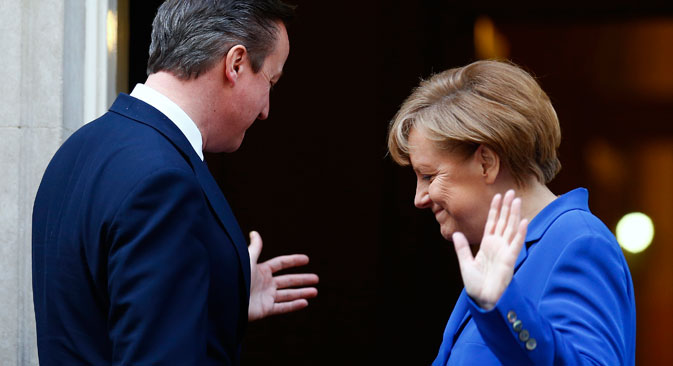 March 13: The prime ministers of Germany and the UK will not attend Russia’s Victory Day celebrations; the EU contemplates launching its own propaganda campaign, and U.S. unclear about how it will fight ISIS

The Moskovsky Komsomolets newspaper writes that German Chancellor Angela Merkel and British Prime Minister David Cameron have declined Russia’s invitation to attend the Victory Day parade in Moscow on May 9 marking the 70th anniversary of the end of World War II in Europe, although Merkel will come to Moscow a day later and lay a wreath at Russia’s Tomb of the Unknown Soldier.

Sergei Markov, director of the Institute of Political Studies Sergei Markov said that the decision was not unexpected. "For the sake of short-term tactical advantages, they are ready to betray the memory of the great victory," Markov said.

President of the Center of Political Technologies Boris Makarenko noted that in 1995, when the West was unhappy with Russia's military operation in Chechnya, the leaders of all the most important countries in the world still came to Moscow for the 50th anniversary fo the end of the war.

"Now Angela Merkel will come to Moscow on May 10 to commemorate those killed in the fight against Fascism, but attending the parade, in her view, is impossible," Makarenko said. "But there is nothing surprising about it. With the way the West views Russia's activity in 2014-2015, it could not have happened otherwise. From their standpoint this is a matter of principle."

Russian business daily Vedomosti reports that Federica Mogherini, the EU’s High Representative for Foreign Affairs Federica Mogherini has been tasked with preparing a plan to counter the Russian presentation of events in Ukraine.

Western politicians and journalists have long decried the reports of the Russian mass media, particularly the RT TV channel, which broadcasts in more than 100 countries worldwide. At the beginning of the year, the foreign ministers of Estonia, Lithuania, Denmark and the UK proposed the establishment of an EU-sponsored TV channel for Russian speakers in Europe.

According to Vladimir Zharikhin, deputy director of the Moscow-based Institute of CIS Countries, it is still unclear what European officials intend to do: "If they are planning to create a new TV and radio company that will present the European viewpoint on Ukraine to Russians and Russian-speaking EU citizens, this channel already exists – Euronews," Zharikhin said.

However, in the beginning of March Egyptian billionaire Naguib Sawiris purchased a 53-percent stake in Euronews, saying that now the channel "must be an open window for every point of view." "It is possible that this is precisely the reason why the EU is developing a new information plan for countering Russian mass media," Zharikhin said.

Newspaper Nezavisimaya Gazeta writes that in February, U.S. President Barack Obama requested Congress give him authorization to use military force against ISIS for three years. The request stressed that any combat operations carried out under the authorization would not be large-scale like those carried out in Afghanistan or Iraq.

However, the request provoked a heated debate during a recent session of the Senate's Foreign Affairs Committee with many senators expressing skepticism about the proposal while the Pentagon has complained that the resolution does not go far enough.

In a comment to NG, President of the Institute of Religion and Politics Alexander Ignatenko said that the American politicians are “confused” about what they can accomplish in a fight against ISIS. "Obama wishes to enter history as the conqueror of ISIS, but this will not happen," Ignatenko said, adding that the lack of an international coalition to fight ISIS was part of the problem. "A part of America's allies have their own interests. This conflict gives countries either military-political or economic benefits.

"Another problem is that Washington considers ISIS an armed group that is active in Iraq and Syria. But this quasi-state is escalating activities also in Libya and Nigeria, in the Sinai Peninsula in Egypt, as well as Mali. And while the Americans are fighting ISIS in Iraq, its branches are pulling back with them a substantial part of the coalition members' military-political possibilities. That is why the Pentagon's announcement about three years not being enough to fight ISIS is completely legitimate," Ignatenko said.

Experts: Russia's withdrawal from the CFE Treaty is a signal to the West>>>