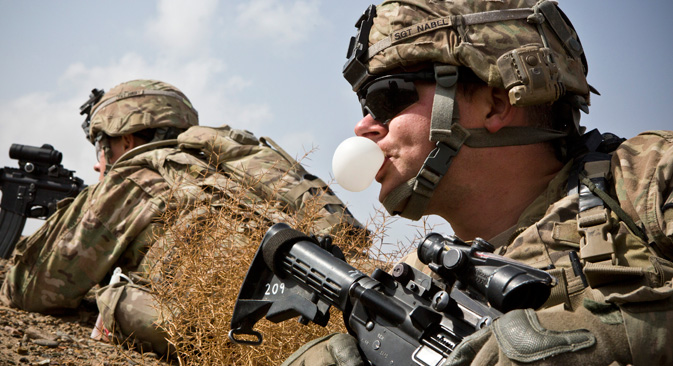 March 16: The White House responds to an Afghan request to review troop withdrawals, Poroshenko submits bill with “poison pill” to Rada and Iceland says no to the EU

The Kommersant newspaper reports that U.S. President Barack Obama intends to retain a bigger military presence in Afghanistan than originally planned, although the number of service personnel to remain and their mission has yet to be determined.

Citing a White House source, Kommersant notes that the initiative to suspend the withdrawal of the remaining U.S. contingent came from the Afghan leader. According to the source, President Ashraf Ghani Ahmadzai asked Washington to show “a certain flexibility” when it came to troop withdrawal and the closure of military bases.

“The decision to suspend the military withdrawal from Afghanistan is a forced step caused by concerns that the growing internal crisis in the country may at one point spin out of control and power may be seized by the Taliban,” said Vladimir Sotnikov, a senior research associate with the International Security Center of the Institute of World Economy and International Relations at the Russian Academy of Science.

Sotnikov also noted that the deepening relationship between the Taliban in Afghanistan and their allies in Pakistan as well as ISIS militants in Iraq and Syria likely influenced the decision. “Arising instability does not allow Barack Obama to draw the long-awaited curtain over the Afghan project,” Sotnikov said.

The Moskovsky Komsomolets newspaper published a story updating readers on the situation in eastern Ukraine now that a month has passed since the Minsk II agreement was signed. As part of the plan, both Ukrainian forces and pro-Russian militias agreed to pull back their heavy weapons from the front lines and set the boundaries of those areas to be granted special self-governing status within Ukraine.

On Friday, Ukrainian President Petro Poroshenko submitted a draft resolution to the Ukrainian parliament, the Verkhovna Rada, setting the boundaries of individual districts inside the Donetsk and Lugansk Regions.

Greater autonomy will be granted only to those territories that formed part of the self-proclaimed Donetsk and Lugansk People’s Republics prior to Sep. 19, 2014, when the first Minsk Agreement was signed. These boundaries exclude the town of Debaltsevo, which was taken by pro-autonomy forces after the February agreement was signed but before its ceasefire went into effect.

The paper quotes Konstantin Zatulin, director of the Moscow-based Institute for CIS Countries, who implied that the authorities in Kiev are not living up to their end of the bargain. “It has been possible to end hostilities in Donbass, now is the time to carry out the political deal, including the status of Donbass and the implementation of the constitutional reform,” Zatulin said. “Ukraine does not want to do any of that and is therefore raising the issue of peacekeepers.”

According to Zatulin, the authorities in Kiev do not want to give any special status to Donetsk and Lugansk, so instead they have included the point about Debaltsevo as a poison pill.

Iceland gives up plans to apply for EU membership

Iceland has withdrawn its application for EU membership, the Vedomosti business daily reports, citing the country’s foreign minister Gunnar Bragi Sveinsson. Vladimir Shveitser, a chief research associate with the Russian Academy of Sciences’ Institute of Europe, told Vedomosti that there are two main reasons for this decision. The first is that Iceland has an issue with the EU fishing quotas.

The economy of Iceland is 90 percent dependent on the fishing industry, but the EU demands that the country reduce the amount of fish it catches to comply with EU standards or face a ban on imports of Icelandic fish into the EU altogether.

Experts: Russia's withdrawal from the CFE Treaty is a signal to the West

The second reason, according to the expert, is Iceland’s debt to the UK and the Netherlands. As a result of its 2008 economic crisis, Iceland nearly went bankrupt. Three of its major banks failed and were unable to pay out deposits lost by foreigners who had invested in the banks.

One of these banks, Landsbanki bank ran savings accounts in the UK and Netherlands under the name Icesave and investors there lost 4 billion euros when it collapsed in 2008. The British and Dutch governments had to reimburse 400,000 citizens.

Iceland voters twice rejected a referendum to pay back the governments, and a European court later said that Iceland is not obligated to pay back foreign consumers, but the issue remains contentious. “In response to the European Union’s demand to have that debt repaid, the Icelandic government put up that question to a national referendum, at which the majority voted against returning the money,” Shveitser said.