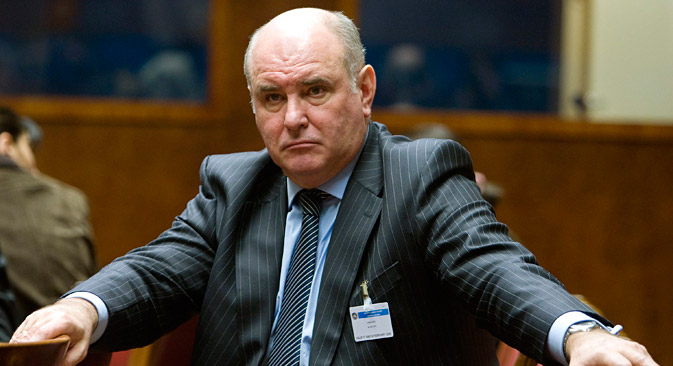 Russian Deputy Foreign Minister Grigory Karasin: "It is absolutely counterproductive and only serves to further exacerbate the situation and the crisis itself. Nothing can be done without direct dialogue between representatives of Donetsk, Lugansk and Kiev." Source: AP

RBTH presents a selection of views from leading Russian media on international events, featuring a report on the latest four-party meeting on the implementation of the Minsk Agreements in eastern Ukraine, as well as a review of Sergei Lavrov's tour of Latin America, and news from Israel on talks on the formation of a new coalition government.

Ukraine refuses to hold dialogue with leaders of unrecognized republics

The weekly business magazine Expert reports on the latest meeting of the deputy foreign ministers of Russia, Ukraine, Germany and France for discussions on regulating the truce in the Donbass region of eastern Ukraine. The ministers discussed a recently adopted Ukrainian law that disrupts the implementation of the Minsk Agreements, the peace accord signed in February. The newspaper reminds us that Kiev is demanding that the Donbass local elections be held according to Ukrainian norms, attaching the further implementation of the peace settlement to them.

According to Expert, Ukraine refuses to engage in dialogue with the current leaders of eastern Ukraine’s breakaway Donetsk and Lugansk “people's republics.” But the conditions set by Kiev are absolutely unacceptable for the unrecognized “republics,” since the Ukrainian authorities are demanding the disarmament of the militias as part of the election process, as well as compliance with a number of other conditions – demands that would amount to something resembling the surrender of the republics if fulfilled, the magazine points out. The implementation of the Minsk peace agreements will be suspended if the position of the Ukrainian side cannot be changed, says Expert.

Judging by the results of the meeting of the foreign ministers and the statements of both Russian and Ukrainian representatives who claimed that the European colleagues took their sides, an attempt to find a compromise on the elections failed.

For Russia, the clear implementation of the Minsk Agreements is important not so much for the resumption of political dialogue, but rather to prevent the resumption of hostilities, Expert writes – at least for the coming months, when the question whether to extend the sanctions against Russia imposed by Europe is decided, the magazine concludes.

Lavrov opens up channels for investment on Latin American tour

The Kommersant business daily reviews Russian Foreign Minister Sergei Lavrov’s tour of Latin America. Staring his tour in Cuba, the foreign minister went to Colombia, traditionally considered to be one of the key U.S. allies in the region. From there he visited Nicaragua, where President Daniel Ortega made a statement about the strengthening of cooperation with Russia in the military sphere.

The newspaper reminds its readers that in February, Russian Defense Minister Sergei Shoigu signed in Nicaragua an agreement on a simplified procedure of Russian Navy warships' visits to the ports of the country. A number of media outlets have linked the treaty with the upcoming start of the construction of the Nicaragua Canal. According to Kommersant, Russian companies can join the project – for example, to get involved in the construction of the adjacent infrastructure.

Netanyahu in negotiations with center-right parties to form cabinet

Israeli President Reuven Rivlin has instructed Likud leader and Prime Minister Benjamin Netanyahu to form a coalition government based on the results of early parliamentary elections within 28 days, writes the centrist newspaper Nezavisimaya Gazeta. The politician is actively negotiating with the centrist, right-wing and Jewish religious parties on the distribution of ministerial portfolios and the development of common policies, the newspaper reports. The Jewish Home party is giving priority to a law on NGOs, which aims at limiting the influence of foreign non-profit organizations on domestic political processes, the newspaper notes.

"The new political leadership of Israel will be much more effective than its predecessors," the director of the Russian Academy of Sciences’ Center for the Analysis of Middle East Conflicts at the Institute for U.S. and Canadian Studies, Alexander Shumilin, told Nezavisimaya Gazeta.

"A solid center-right coalition reflects the interests of the population, and it will not follow the fate of Netanyahu's previous cabinet. As to the foreign policy situation, any U.S. administration – including the current one – will back down against such a government. Difficulties may arise only with those issues in which the Israeli leadership is not involved directly, such as the Iranian nuclear issue," said Shumilin.