Anna Sorokina
RBTH, based on Interfax 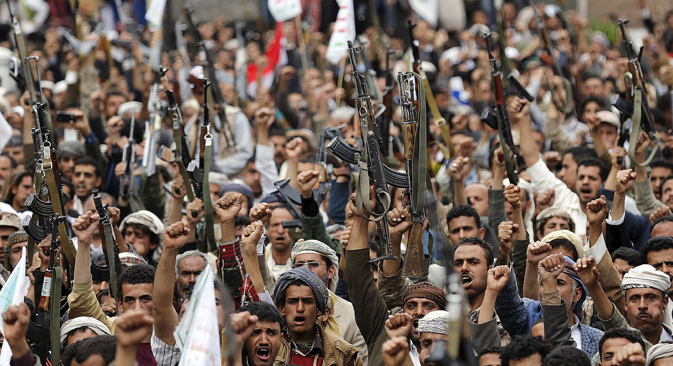 The current crisis in Yemen may last for a long time, says Russian experts. Source: Reuters

Yemen conflicts can be settled only based on broad nationwide dialogue, says Russian Foreign Ministry

Moscow has urged all parties to the conflict in Yemen and their foreign allies to immediately cease any forms of military action after Saudi Arabia launched air strikes on Houthi rebel positions in its neighbor’s territory on March 25.

"We deem it extremely important that all parties to the Yemen conflict and their external allies immediately stop any forms of military action and abandon attempts to attain their ends through arms," the Russian Foreign Ministry said in a commentary available on its website on March 27.

Saudi Ambassador to the U.S. Adel A. Al-Jubeir announced on March 25 that his country had started delivering airstrikes upon Houthi insurgents in the Yemeni capital of Sana'a. Saudi Arabia said it was ready to deploy 100 warplanes and 150,000 servicemen in defense of the legitimate Yemeni authorities against the Houthi.

At the same time, the Russian diplomatic mission in Sana'a said that it does not plan to evacuate Russian citizens from Yemen because of the exacerbation of the situation in this country.

"We are convinced that the underlying conflicts existing in Yemen can be settled only based on a broad nationwide dialogue," it said.

"Moscow is seriously concerned about the latest events in the friendly Republic of Yemen, whose sovereignty, unity, and territorial integrity we have always consistently supported," the ministry said.

Russian Foreign Ministry spokesperson Alexander Lukashevich said on March 26 that a military operation in Yemen was not a way to settle the situation in this country.

"Such a scenario cannot lead to the conflict's settlement by definition. By the way, a peaceful settlement of disputes is a UN Charter requirement," Lukashevich said during a news briefing in Moscow.

"Proceeding on from this, we will continue to work, including in the UN forum, and will employ all our opportunities in working with the Yemeni parties and the states involved in this operation through the Cooperation Council for the Arab States of the Gulf," he said.

He said he would hope the international community "will find ways to stop this bloodshed as soon as possible."

He, however, refrained from answering whether he believes the operation in Yemen is consistent with international law.

"As there have been very few requests from Russian citizens – they are singular – we are not planning any evacuation measures or actions either in relation to embassy employees or Russian citizens living in Yemen," Russian embassy spokesman Timofei Bokov said.

Saudi Arabia's airstrikes in Sana'a have targeted mostly military facilities located quite far from the Russian embassy, he said.

Russian expert: Yemeni crisis could go on for some time

The current crisis in Yemen may last for a long time, said Yelena Suponina, an expert on the Middle East, and advisor to the director of the Russian Strategic Studies Institute.

"Saudi Arabia has not fully calculated the risks of bombing this country," she said, noting that Riyadh should continue to search for a diplomatic solution to the Yemeni crisis.

"However, when the Houthis reached the coast at Bab-el-Mandeb, Riyadh became afraid of such a development of the situation. Bab-el-Mandeb is the main route for exporting oil from the Arabian monarchies to America and Europe, and Saudis hate the fact that the Houthis have already taken control of the coast of this strait and have been just 15 or 20 kilometers from any tanker," Suponina said.

"Yemenis historically can tolerate no foreign military intervention," she said. "Yemenis have a lot of arms. Be it not the most up-to-date, but nevertheless there are several Kalashnikov rifles and other small arms in every house. Of course they cannot counter the up-to-date equipment of the Arab countries of the Persian Gulf in a symmetrical war, but they can organize an asymmetrical resistance similar to guerilla warfare," Suponina said.

One should also bear in mind that there are Shia minorities in Saudi Arabia and Pakistan, while Shia is the majority in Bahrain, she said.

"Shia communities are of course against what Saudi Arabia is doing in Yemen," Suponina said.

However, she does not expect that Shia Muslims will try to destabilize the situation in these countries. "Shia protests in Arab countries will be muted, but such dissatisfaction will come out and may result in something more serious in any unfavorable situation for local authorities," she said.

Suponina also recalled that the Houthis in Yemen enjoy support from Iran. "It is unlikely that Iran will get directly involved in this hot conflict but indirectly it will continue to try to hamper Saudi Arabia, which will mean the escalation of the indirect conflict between the Iranians and the Saudis," she said.

She, however, doubts that a direct military confrontation is possible between Iran and Saudi Arabia at present.