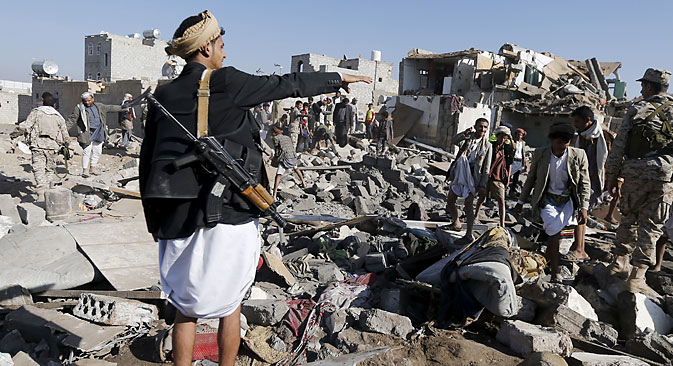 Reuters An armed man gestures as he stands on the rubble of houses destroyed by an air strike near Sanaa Airport March 26, 2015. Source: Reuters

RBTH presents a selection of views from leading Russian media on international events, featuring reports on Saudi Arabia’s attack on Yemen and plans by China to invest in rebuilding Ukraine, as well as analysis of the ongoing negotiations between the P5+1 and Iran on Tehran’s nuclear program.

The Vedomosti business daily writes that Saudi Arabia has begun a military operation against Houthi rebels in Yemen by launching an air strike on sites in the Yemeni capital of Sana'a. Almost 10 countries, including those from the Persian Gulf, as well as Jordan, Egypt, Morocco, Pakistan and Sudan, have announced that they are participating in the Saudi coalition. In turn, the Houthi rebels owe their success to Iran, which is supporting the Yemen Shiites with finances, arms and specialists.

"For Iran, Yemen is a key to controlling the Red Sea, through which oil supplies from the Persian Gulf countries head to Europe and the U.S.," said Vladimir Sazhin, senior scientific collaborator from the Russian Academy of Sciences’ Institute of Middle East Studies. According to Sazhin, the current conflict is yet another confrontation between Saudi Arabia and Iran for supremacy in the region, and for now Iran is successfully spreading its influence, first through Lebanon, then Syria, Iraq and now Yemen.

Nikita Smagin, a political analyst and Middle East expert, believes that the Saudi coalition's interference will lead to destabilization in Yemen: "For now the Houthis are a powerful single force that can unite the country. The coalition's military action will weaken it, but will doubtfully destroy it," he said. The most important thing for Saudi Arabia is not to let a new Shiite government take root near its borders, said Smagin. This explains why the Saudis do not fear the strengthening of Al-Qaeda, he said: The Iranian threat is more of a priority than the threat of radical Islam.

Restrained optimism in negotiations with Iran

The centrist Nezavisimaya Gazeta newspaper reports on the key phase in the negotiations between Tehran and Washington on Iran's nuclear program, as well as on the renewal of Iran's consultations with the the P5+1 group of international mediators (the U.S., Russia, China, the UK, and France, plus Germany).

According to Nezavisimaya Gazeta, the format of the political agreement is still unclear. It is not known how detailed it will be, but in any case it will be an inside document, most likely an announcement or a political declaration containing a simplified list of key positions.

Besides the contradictions between Iran and the international mediators, there is friction within the P5+1 itself. Nezavisimaya Gazeta writes that the last round of negotiations between the P5+1 and Iran was halted on March 20 when the participants took a break to coordinate their approaches. France conspicuously criticizes the "deadline" format, saying that it creates the impression that a deal must be reached at all costs, which can lead to unacceptable concessions. If diplomatic sources are to be believed, Washington is planning to persuade France to support the deal.

China to invest in rebuilding Ukraine

The Gazeta.ru online newspaper writes that China is ready to invest in Ukraine, despite the civil war taking place in the country. According to a memorandum, Kiev will receive a $15-billion loan with minimal interest and the right to extend its 15-year term. The money will go towards the development of the state housing policy, the construction of accessible housing, the creation of a social housing fund, the development of youth housing construction, the crediting of individual rural developers and the realization of infrastructure projects.

"The Chinese always sign many investment memorandums, but they do not always lead to concrete investments," said Alexei Maslov, Director of the Asian Studies Faculty at the Higher School of Economics National Research University. Maslov explained that China had already used this policy of entering a country with a turbulent economy on many occasions, for example in Latin America or in Central Asia. "In the future China can demand to have its firms be present in Ukraine. At the same time the Chinese investors' sphere of interest can be reoriented towards other sectors of the economy," he said. 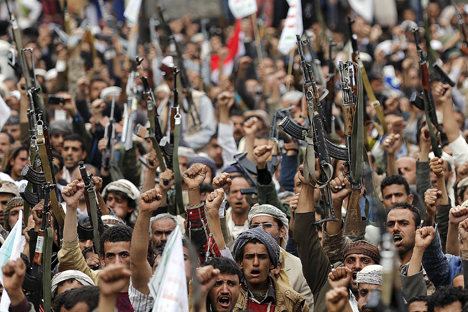