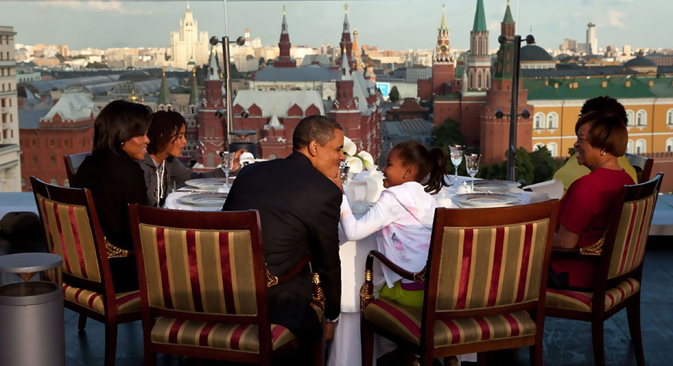 U.S. President Barack Obama with his family during his visit to Moscow in July, 2009. Source: White House / Pete Souza

On April 8, Russia Direct releases its comprehensive Ranking of Russian and Post-Soviet Studies in the U.S., covering 32 programs at American universities. The Ranking is an attempt to revive interest in Russia within the U.S. and improve relations between two countries. This is especially important, given the Ukrainian crisis and the geopolitical standoff between the two nations, which some experts are calling a “new Cold War.”

Harvard’s Davis Center for Russian and Eurasian Studies is recognized as the best Russian Studies program in the U.S., followed by University of Wisconsin – Madison, Columbia, University of Illinois at Urbana-Champaign and Stanford.

The methodology is a result of discussions with different academics and experts in Russian Studies, including Dan Davidson, president and co-funder of the American Council for International Education, and Viktoria Zhuravleva, vice-director of the Department of International Relations and Area Studies at the Russian State University for the Humanities.

In addition, the ranking brings together insights of experts from U.S. think tanks, former U.S. Department of State officials, advisors and those academics directly involved in teaching Russian Studies programs for American students and creating the curriculum.

Among them are Alexandra Vacroux of Harvard, Angela Stent of Georgetown, Jeffrey Mankoff of the Center for Strategic and International Studies, Anna Vassilieva of the Middlebury Institute of International Studies, Alexander Abashkin of the Moscow School of Social and Economic Sciences, and Nicolai Petro of the University of Rhode Island.

Experts agree that such a Ranking is very timely and relevant given the sharp decline in U.S.-Russia relations and increasing distrust between two countries spurred by the Ukrainian crisis.

Zhuravleva gives two reasons why this project is important: “First, the decline in expertise on Russia in the United States; second, the urgent need for multifaceted research into post-Soviet Russia.”

“An advantage of the ranking is its international look which is partly due to the project’s goals, aimed at reviving interest in Russian Studies in the U.S. and establishing a dialogue between the two countries' expert and academic communities,” she said. “The selected parameters present a clear view of the dynamics of Russia-related academic study in U.S. universities.”

“Russia Direct’s rankings provide a useful service to young scholars who are considering pursuing graduate work in the field of Russian studies... Hopefully the rankings will help shine a light on the important, challenging and rewarding subject that is Russia,“ said James Carden, a contributor to The National Interest and the Moscow Times, and a former advisor to the U.S.-Russia Presidential Commission at the U.S. State Department.

Stanislav Tkachenko, professor at St. Petersburg State University, agrees and argues that the ranking and its methodology are devised with “obvious care and meticulous attention.” However, Zhuravleva points out that the representativeness of the data is “still a lingering issue” and doesn’t take into account two more important criteria: the number of visiting Russian scholars teaching within Russian Studies programs, and their interdisciplinary level.