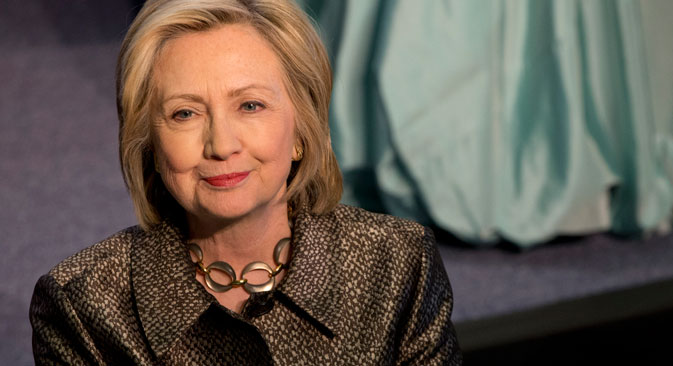 Hillary Clinton's hopes of becoming U.S. President have taken a setback after revelations that the Clinton Foundation may have accepted payments from Russia. Source: AP

RBTH presents a selection of views from leading Russian media on international events, featuring a report on the scandal erupting in the U.S. over revelations that the Clinton Foundation received money from Russia in relation to the purchase of a uranium mining firm, as well as news on France’s position on an EU peacekeeping mission in eastern Ukraine and analysis of the results of Argentine President Cristina Kirchner's recent visit to Moscow.

The Gazeta.ru online newspaper reports that hardly had Hillary Clinton announced her candidacy for the U.S. presidential elections than the first scandal related to her political past broke out in the American media, with Hillary Clinton and her husband, former U.S. president Bill, accused of having received financing from Russia.

The State Department, when it was under Hillary's command, had approved of a deal in which the Canadian mining company Uranium One was sold to the Russian state nuclear corporation Rosatom. Since uranium is a strategic mineral resource, any sales of companies to foreign owners must by law be approved by several U.S. government structures. During the course of the acquisition of Uranium One, the former owners of the company made vast donations to the Clinton Foundation. Gazeta.ru explains that American interests were directly affected by the deal since Uranium One controlled up to 20 percent of American uranium production, which as a result was acquired by Russia. Additional piquancy was lent to the scandal by the fact that the revelations were first made in the New York Times, a newspaper that is famous for being sympathetic to the Democratic Party, which Clinton represents.

In the view of Yuri Rogulev, Director of the Franklin Roosevelt U.S. Studies Center, the article in the New York Times "is unlikely to have a negative effect on Clinton.” Moreover, he pointed out, this is not the first story of money being given to the Clinton Foundation by international donors. “In particular, these donors included Ukrainian billionaire Victor Pinchuk, who was an associate of [former Ukrainian president] Leonid Kuchma, as well as Arab sheiks. The foundation carries out global projects. It is not a surprise that money came from various countries."

The centrist newspaper Nezavisimaya Gazeta reviews Ukrainian President Petro Poroshenko's visit to Paris. Less than a week before the EU-Ukraine Summit in Kiev on April 27, the Ukrainian president tried to convince his French counterpart Francois Hollande that it is necessary to send an EU peacekeeping mission to the Donbass region of eastern Ukraine, where an uneasy truce is currently being observed between Ukrainian government forces and Russian-backed rebels. However, he did not succeed in this, writes the newspaper. Hollande said that he doubted the necessity of sending a peacekeeping mission to eastern Ukraine, stating that this issue should be decided at the UN Security Council.

Nezavisimaya Gazeta reminds its readers that on March 17 the Ukrainian parliament, the Verkhovna Rada, appealed to the UN and the EU with a request to send a peacekeeping contingent to Ukraine. The Ukrainian side had remarked that the UN would not fulfill the request because Russia would use its power of veto at the Security Council. Consequently, Ukraine thought of asking the EU for the peacekeeping mission, which does not require a UN decision, only a consolidated position between all EU member countries.

Experts in Kiev say that Russia has influence on a series of countries in Europe, but the EU decision is dependent on the positions of its leading countries, Germany and France. "The most difficult obstacle in the negotiations for Ukraine is France," says Vice President of the Gorshenin Institute Alexei Leschenko. "If we exclude the ‘friends of Putin club’ – the governments of Greece, the Czech Republic, Hungary – then France can be considered the most pro-Russian European country."

The Greek scenario: Putin and Kirchner agree on strategic partnership

The Moskovsky Komsomolets tabloid newspaper writes that during his recent meeting with Argentine President Cristina Kirchner in Moscow it was unlikely that Russian President Vladimir Putin was able to free himself of the obvious déjà vu. Like Greek Prime Minister Alexis Tsipras before her, the Argentine leader also counted on receiving support. As a result, the scheme of financial aid to Argentina will be similar to the one that Russia offered the Greeks two weeks ago: credit in return for large joint projects.

Moskovsky Komsomolets reports that since the end of last year Argentina has been in a state of technical default on its obligations. Inflation is about 40 percent, the economy has been in decline for the last five quarters, unemployment is rising quickly and the Argentine peso has set a record for its rapid fall among Latin American currencies. For this reason, Cristina Kirchner's visit to Moscow reminds everyone of Alexis Tsipras' recent visit: Like Greece, Argentina has been actively striving to befriend Russia, hoping to replenish its currency reserves. The publication adds that the Kremlin is to give Argentina a $1.5-billion loan for 20 years within the framework of the construction of the Chuido hydroelectric power plant in Argentina.