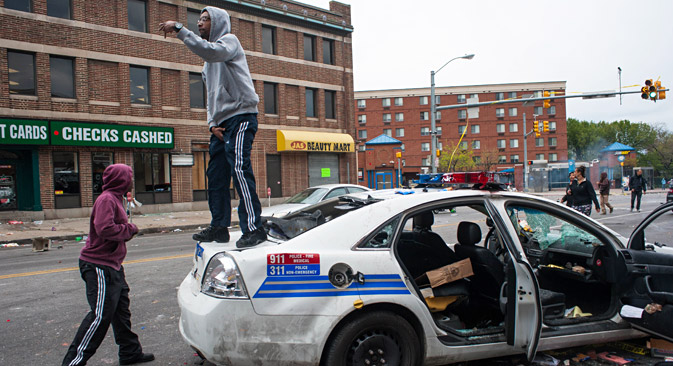 A protestor stands on a destroyed Baltimore City Police car on North Avenue during a protest for the death of Freddie Gray in Baltimore, Maryland, USA, 27 April 2015. Source: EPA

RBTH presents a selection of views from leading Russian media on international events, featuring analysis of the potential of the unrest in Baltimore to influence the U.S. presidential election campaign, as well as reports on U.S.-Russian cooperation on nuclear disarmament and the strengthening of military cooperation between the U.S. and Japan.

Business daily Kommersantreports that after a five-month respite America is facing new turmoil associated with the problematic relationship between the police and members of the African-American community.

The newspaper writes that the riots in Baltimore, which were sparked by the death of African-American Freddie Gray on April 19, is becoming a serious test for U.S. President Barack Obama and the new Attorney General Loretta Lynch. The newspaper highlights that the disorder began after the start of the presidential race. Kommersant writes that in the course of the Democratic and Republican primaries the relationship between communities and law enforcement agencies, as well as the long overdue reform of the U.S. law enforcement system, could become the key issue on the agenda.

Professor Alexander Dorin of the Higher School of Economics in Moscow has written an opinion piece in the paper arguing that the current situation could complicate the election campaign for Hillary Clinton: America’s minorities have traditionally been part of the Democratic electorate and it was specifically these minorities that supported and ensured Barack Obama’s eight years in office. “The Republicans will base their campaign on [establishing a] contrast, and they have a chance of succeeding,” says Domrin.

The centrist newspaper Nezavisimaya Gazetareports that in their addresses to members of the UN’s 9th Review Conference for the Treaty on the Non-Proliferation of Nuclear Weapons (NPT), Russian President Vladimir Putin and U.S. Secretary of State John Kerry stated that they have reduced their nuclear arsenals to their lowest levels in 60 years. Furthermore, Washington has suggested to Moscow that they not rest on their laurels but agree to guidelines for further disarmament.

Pavel Zolotarev, deputy director of the Russian Academy of Sciences’ InstituteforU.S. and CanadianStudies highlighted in an interview with Nezavisimaya Gazeta that, along with the serious state of American and Russian relations, the need to begin negotiations in a multilateral format has presented a real problem. At a time when the U.S. and Russia intend to reduce their nuclear potential, India and Pakistan are increasing theirs, and this is a dangerous trend, said Zolotarev.

Alexei Fenenko, an associate professor at Moscow State University, suggests that Kerry’s announcement demonstrates that U.S. sanctions against Russia remain just a selection of limited measures in one area, and that the Americans so far do not want a global confrontation. Russia likewise does not want such a confrontation, and has pointedly not raised the problem of nuclear non-proliferation and disarmament in discussions of sanctions, said Fenenko.

U.S. and Japan strengthen military alliance – but against whom?

The business magazine Expertdiscusses the visit of Japanese Prime Minister Shinzō Abe to the United States, which took place this week. The publication observes that for a long time one of the main tasks of the American-Japanese alliance was to restrain the growth of Japan’s military might. However, on coming to power, Abe has followed a course to strengthen the military capabilities of the country, writes Expert.

At the conclusion of Abe’s visit, American-Japanese relations will undergo serious changes, as a result of which Tokyo will play a more significant role in the two countries’ military alliance. Furthermore, the U.S. has promised to provide Japan with the latest equipment for joint humanitarian operations. The publication says that Tokyo has, in its turn, promised to pass a law that withdraws the country’s constitutional ban on participating in joint projects for self defense, which gives Japan the opportunity to fight alongside the Americans in case of an attack on the United States.

Expert writes that Shinzō Abe wants to create a serious, anti-Chinese alliance and include South Korea in the alliance. The publication also highlights that Tokyo might have problems with Moscow: During the visit by the Japanese prime minister, U.S. President Barack Obama announced that the U.S. and Japan “would stand together against Russian aggression in Ukraine.” If the Japanese Ministry of Foreign Affairs cannot “neutralize” this statement, than it threatens the whole spectrum of Japanese-Russian relations, writes the newspaper.

Opinion: After Ukraine, the West should open its doors to Russia