Press Digest: Eastern Ukraine on verge of slipping back into armed conflict 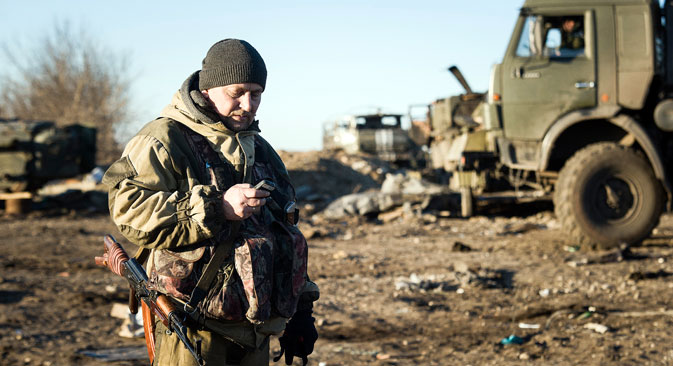 A soldier from the rebel forces of the self-proclaimed Donetsk People’s Republic takes a break in Debaltsevo, near Donetsk, on Feb. 24. Source:EPA / Vostockphoto

RBTH presents a selection of views from leading Russian media on international events, featuring reports on the worsening situation in the Donbass region of eastern Ukraine, a possible meeting between German Chancellor Angela Merkel and the Russian opposition, and the cooling of Russian-Turkish relations over Russian President Vladimir Putin’s recent visit to Armenia.

Truce under strain in eastern Ukraine

The parties to the conflict in the Donbass region of eastern Ukraine have not abandoned their attempts to continue implementing the Minsk peace agreements, the business daily Kommersant reports. The article is published ahead of the meeting of a contact group that includes representatives of the OSCE, Ukraine and Russia as well as the self-proclaimed Donetsk and Luhansk “people's republics.” Meanwhile, the situation in the Donbass is on the brink of the full-scale resumption of hostilities, Kommersant reports.

According to experts interviewed by the newspaper, the renewal of military action is becoming increasingly likely in the current situation. "It is more than likely that the conflict will move into a hot phase. The only question is when," Petro Poroshenko Bloc deputy Alexander Chernenko told the newspaper. "Meetings of the contact group, Minsk-format meetings are needed primarily for the extension of a bad peace."

Against the background of such sentiments, for the Ukrainian government war could become a means of diverting attention from social unrest, as well as a factor in the consolidation of society and an argument for new foreign aid, says Andrei Fyodorov, director of the Russian Center for Policy Studies.

Spat with Turkey: lessons for Moscow

The weekly magazine Expert continues to monitor the aggravation of Russian-Turkish relations caused by the visit of Russian President Vladimir Putin to Armenia on April 24 for the centennial of the Armenian Genocide. The magazine notes that there will be no severing of relations between Ankara and Moscow over the issue; however, Russia must draw the right conclusions from the situation. According to experts, the Turkish side will respond to Moscow through an intensification of anti-Russian actions in Crimea, as well as through the recognition of the "Circassian genocide" allegedly carried out by the Russian Empire in 1864.

In addition, there may be problems in the economic sphere, including in the negotiations over the Turkish Stream gas pipeline, notes Expert. According to the magazine, it is not so much issues in Russian-Turkish relations that Moscow should now fear, but Turkey's desire to exploit the role of the offended. It is possible that Ankara expects to receive additional concessions (for example, a reduction in gas prices) from Moscow as compensation for the actions of the Russian side, which are allegedly "insulting for Turkey," writes Expert.

The former head of ill-fated oil company Yukos, Mikhail Khodorkovsky, has said in an interview with the Russian affairs news website Meduza that he is not looking to compete with opposition leader Alexei Navalny. For example, he has a positive attitude to Navalny's attempts to fight corruption, but considers them meaningless under the existing political system. "I am not looking to compete with him at all. I have an inner feeling that we are moving in different planes. These planes may cross somewhere, but they are different globally," said Khodorkovsky.

Khodorkovsky said he did not see himself as "coming to power as a result of elections,” although he is ready to head a transitional government, in spite of the undesirability of such a prospect. However, he added that he does not believe "in Alexei Navalny – as in a person who will come to power as soon as everything collapses." According to Khodorkovsky, it is "someone whom we maybe don't even know today" who will come to power.