Press Digest: Visit of Xi Jinping to kick off marathon of bilateral summits 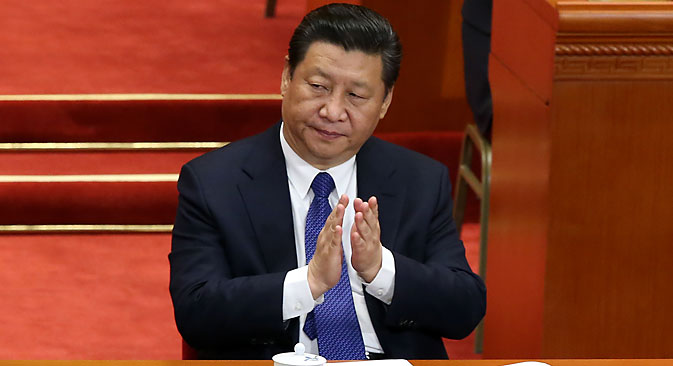 RBTH presents a selection of views from leading Russian media on international events, featuring analysis of the impact this year’s unprecedented series of meetings between Russian and Chinese leaders is likely to have on bilateral relations, as well as a report on State Duma Chairman Sergei Naryshkin's visit to Cuba.

The Kommersant business daily writes that Chinese President Xi Jinping is beginning a tour of the former Soviet republics, but more importantly, will visit Russia and participate in the ceremony dedicated to the 70th Anniversary of the end of World War II in Europe. This year's first meeting between the Chinese leader and Russian President Vladimir Putin will open an unprecedented series of contacts between the two, who in Russia alone will meet three times in the upcoming months: in May in Moscow and in July during the BRICS and SCO summits in Ufa. Xi Jinping's visit to Moscow will be the first Russian-Chinese summit of the year, during which agreements will be signed in the fields of energy, aviation, space, taxes and finance.

According to experts interviewed by Kommersant, the continuing crisis in relations with the West is spurring Moscow to actively search for a global counterweight and to try to create a Russian-Chinese "Big Two." In the opinion of Alexander Lomanov, chief scientific collaborator at the Middle East Institute of the Russian Academy of Sciences, Moscow "understands perfectly well that in 10 years its neighbor will become the biggest economy on the planet." However, IMEMO collaborator Georgy Kunadze is not so upbeat. He believes that "the pragmatic Chinese understand how important their leader's trip to Moscow is for Russia and are probably expecting a certain ‘courtesy’ from Russia in return.”

Despite Moscow's current attempts to represent the continuing convergence with Beijing as a sign of a new emerging alliance and global counterbalance to the West, the Chinese government is carefully avoiding unconditional solidarity with Moscow in its conflict with the US and EU, remarks Kommersant.

Naryshkin stresses ties between Moscow and Havana on Cuba visit

The Vedomosti business daily reports on Russian State Duma Chairman Sergei Naryshkin's visit to Cuba, where he held talks with President of Cuba's National Assembly of People's Power Esteban Lazo Hernandez. Together on May 5 they opened the plenary session of an international conference titled “The USSR and Latin America during WWII and in the Present Day.” The main issue in the meeting was not only the 70th anniversary of the end of World War II in Europe, but also the 55th anniversary of the restoration of diplomatic ties between Russia and Cuba.

"The people of Latin America contributed to the victory; our countries both laid out the foundations of the UN," the newspaper cites Sergei Naryshkin as saying. In turn, Deputy Foreign Minister of El Salvador Carlos Castaneda said, "Russia suffered most of all from the war, but on this side of the ocean there were also victims." He reminded everyone that Latin America supported the fight with provisions and troops.

Director of the Russian Institute of Latin America Vladimir Davydov told Vedomosti that, in view of its past, the region can play a significant role in neutralizing today's economic and geopolitical conflicts.