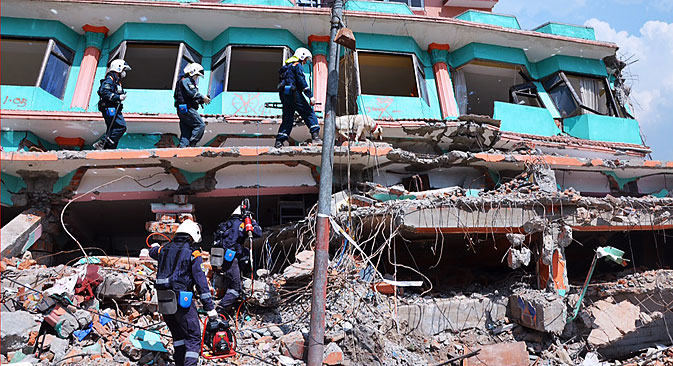 Rescue workers of the Russian emergency situations ministry clearing debris in the aftermath of a 7.8-magnitude earthquake that struck Nepal on April 25, 2015. Alexei Shtokal/TASS

The Russian Emergencies Ministry has completed the evacuation of Russian citizens and foreigners in the Himalayan country of Nepal, which was hit by a 7.8-magnitude earthquake on April 25, followed by several aftershocks. Efforts are on to trace missing Russian diplomats and citizens.

Russia wound up its evacuation operations in Nepal this week, Alexander Romanov, chief of the Russian Emergencies Ministry’s Nepal rescue team said on May 5. There is no need for further evacuations as quake-hit Nepal is regaining stability, he added.

“The situation is getting back to normal,” Romanov said. “The focus is now on medical aid to the victims, and food and first aid supplies.” He said 164 people had been evacuated from the country, while aidhas been provided to 180 others.

Russia will provide aid for those affected by the earthquake and continue its search for missing citizens. "Russian specialists are working in a group responsible for receiving and sending out international aid. Search and rescue work is being done by 10 mobile groups in the northern and eastern suburbs of Kathmandu,” Romanov said.

Thirty-five districts are being searched and rubble has been cleared away from an area of 35,000 square meters.

Russian Emergencies Minister Vladimir Puchkov said that in addition to personalized aid to the victims, a search must be organized for the missing people.

According to earlier reports, two Russian diplomats, Alexei Lipeyev and Maria Yakovleva, are missing in Nepal. According to available information, they were vacationing there and have not made contact for over a week now.

Two groups of rescuers are looking for the diplomats.

“All Russian tourist groups in Nepal have already been contacted. Their location is known. At the same time, two groups of Russian Emergency Situations Ministry rescuers have been sent to the Langtang National Park to look for two Russian diplomats,” Romanov said.

Romanov said one of the groups landed on the top of the mountain from a helicopter and the other group is moving towards them from the foot of the mountain.

Apart from the Russian Emergencies Ministry rescue teams, there is a team of Russian pediatricians operating in Nepal.

This team, consisting of seven doctors from the Emergency Surgery & Children's Trauma Department of Moscow's Pediatric Scientific Research Institute, has assisted 324 patients, both children and adults, and carried out 52 medical operations in five Katmandu hospitals during their short time in Nepal.

According to the most recent information, the death toll from the earthquake in Nepal, which took place at the end of last month, has touched 6,204, with 13,932 people reporting injuries.