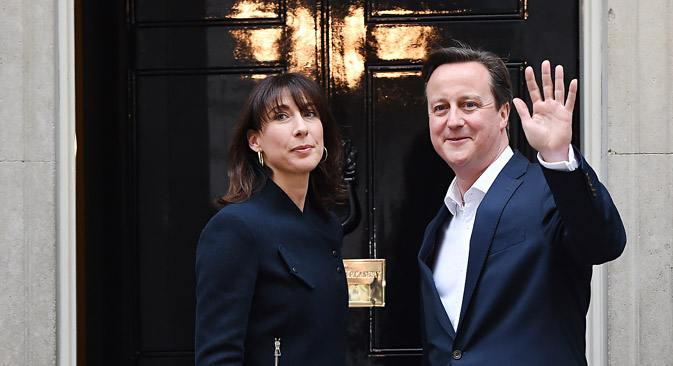 David Cameron, pictured here with his wife Samantha outside No. 10 Downing Street in London, has won a second term as British Prime Minister. Source: EPA

RBTH presents a selection of views from leading Russian media on international events, featuring reports on the Conservative victory in the British parliamentary elections, an important announcement about Russia-NATO cooperation made by German Defense Minister Frank-Walter Steinmeier, and a request to the UN for help in achieving self-determination by indigenous representatives of Alaska and Hawaii.

Russian business daily Kommersantcontinues to follow the story of the British parliamentary elections held on May 7. The results show a resounding success for the Conservative party, led by the incumbent prime minister David Cameron, who Kommersant says now has the chance to form a single-party parliament. Cameron has promised to “unite the country” and guaranteed to carry out a referendum on whether the UK should remain a member of the European Union.

According to forecasts, writes the newspaper, the Labour party, which was the key rival to the Tories, will lose 23 seats in the House of Commons [in fact they lost 26 – RBTH], the elected house of the British parliament. Labour leader Ed Miliband has already announced his resignation. Meanwhile, the Scottish National Party (SNP) has achieved an exceptional result — coming third overall in the race after sweeping to victory all over Scotland. The party will now be able to claim 58 seats [the final figure was 56 – RBTH]. The Liberal Democrats, who were members of the ruling coalition in the previous government, won just eight seats this time, writes Kommersant.

The newspaper quotes Dmitry Peskov, the press spokesman for Russian President Vladimir Putin, who said that “unfortunately relations [between Moscow and London] are currently slightly frozen, but this was not a Russian initiative.”

NATO on the phone

The Gazeta.ru online newspaper writes about German Defense Minister Frank-Walter Steinmeier's visit to Volgograd (formerly Stalingrad) on May 7, where he honored the memory of the heroes of the Battle of Stalingrad and asked Russia to forgive Germany for the actions of the Wehrmacht. The minister will not be present during the Victory Day Parade on May 9, but on the following day German Chancellor Angela Merkel will arrive in Moscow to lay a wreath at the Tomb of the Unknown Soldier and meet Russian President Vladimir Putin.

Gazeta.ru says that Steinmeier made an important announcement about the re-opening of the "hot line" between Russia and NATO, which the sides use to inform each other about military drills and possible incidents related to them. However, a NATO representative told Gazeta.ru that back in December 2014 NATO countries' foreign ministers agreed that in case of "tense relations" between the alliance and Russia, contacts between high-ranking NATO officials and the Russian military and diplomats should continue.

According to Gazeta.ru, this does not mean that military contacts between the alliance and Russia will also recommence. They were frozen completely after Crimea became part of the Russian Federation. Currently, all direct contacts are made only on a diplomatic level.

In a story titled “Alaska and Hawaii ask UN to recognize U.S. occupation,” the Moskovsky Komsomolets tabloid newspaper reports that representatives of the indigenous peoples of Alaska and the Hawaiian Islands have appealed to the world community through the UN, asking to help them obtain the right to self-determination. The letter was distributed in Geneva on May 7.

According to the newspaper, the representatives of the peoples of Alaska and the Hawaiian Islands are calling on the UN country-members to raise the issue during a discussion to be held on May 11 within the framework of the UN Human Rights Council's periodic review of rights and freedoms in the U.S. The letter emphasizes that Russia's sale of Alaska to the U.S. in 1867 "did not mean the transference to the U.S. of sovereignty over Alaska," while "the United States’ invasion of Hawaii in 1893 was carried out in violation of bilateral agreements and international law."

Quoting an interview with the TASS news agency, Moskovsky Komsomolets cites Ronald Barnes, a representative of Alaska in the Alaska-Hawaii Alliance for Self-Determination, as saying that Alaska and Russia have a lot in common in terms of history, culture and religion. In his view, Alaska could be "a neutral country located between Russia and the West."

TROIKA REPORT: Another piece in the puzzle for BRICS global finance system