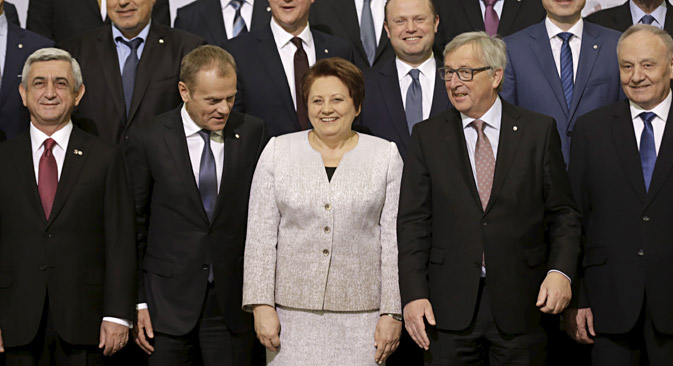 Heads of states and EU officials before the Eastern Partnership Summit session in Riga, May 22. Source: Reuters

RBTH presents a selection of views from leading Russian media on international events, featuring analysis of the ongoing EU Eastern Partnership summit in Riga, as well as reports on Ukraine’s withdrawal from military agreements with Russia and demands by the Georgian opposition that Moscow and Tbilisi end dialogue amid controversy over Russia’s relations with the breakaway “republic” of South Ossetia.

The online newspaper Gazeta.ru analyzes the EU's Eastern Partnership summit, currently taking place in the Latvian capital Riga, with a special focus on the presence of Moscow's partners Belarus and Armenia.

Gazeta.ru reminds its readers that while a year ago Minsk ignored the summit, today Belarus is actively strengthening its relations with European countries and is sending signals to NATO about its readiness to establish cooperation.

According to Sergei Utkin, deputy director of the Strategic Evaluation Department at the Russian Academy of Sciences’ Center of Situation Analysis, "in the conditions of the Ukrainian crisis the space for dialogue with Belarus has expanded, but it is difficult to talk about a "reset," especially with the upcoming Belarus presidential elections, which mostly likely will not help to improve relations."

Armenia, just like Belarus, is part of the Eurasian Union and although it is not seeking to become a member of the EU, it is actively improving ties with the organization. Gazeta.ru remarks that although the EU promises not to put pressure on Russia's allies participating in the partnership, given the experience of Ukraine and the introduction of large-scale sanctions against Russia, Moscow is wary about the Eastern Partnership project.

Russian experts are convinced that interest in the Eastern Partnership has significantly declined and no one expects any breakthroughs in Riga. Sergei Utkin believes that today it is impossible to characterize the partnership as homogenous. "We can only speak about the EU's separate relations with each of the participating countries, since they greatly differ from each other,” he said.

The centrist newspaper Nezavisimaya Gazeta reports that yesterday Ukraine's parliament, the Verkhovna Rada, has withdrawn from five agreements with Russia on cooperation in the military sphere. It is still unclear why the decision has only been made now, even though Kiev has been talking of Russian aggression since March 2014. The publication does not exclude that the decision is related to preparations by Ukraine for signing cooperation agreements with NATO.

Nezavisimaya Gazeta explains that the signing of an action plan for Ukraine to receive NATO status implies extremely high requirements concerning the implementation of reforms in all spheres, including political, economic and social. While the EU association agreement points only to the objectives, allowing Kiev to independently determine the forms, mechanisms and terms of the reforms, the NATO agreement looks like a concrete plan.

Director of the Ukrainian Strategic Studies Center Yuri Sirotyuk said that Kiev is once again a half a year late with the necessary decision.

"It was necessary to introduce a new regime of relations with Russia during the time of the events in Crimea, a regime that first of all would have restricted and banned any questions of military cooperation, as well as those in the diplomatic, financial and commercial fields," remarked Sirotyuk, adding that Kiev always acted in a reactionary way, responding to the moves of the opposing side.

The business daily Kommersant reports that Georgia's opposition has demanded an immediate end to the dialogue between Moscow and Tbilisi, which is being conducted by Russian Deputy Foreign Minister Grigory Karasin and Special Representative of the Georgian Prime Minister Zurab Abashidze. The cause was the appointment of Karasin as presidential representative in the ratification of Moscow’s partnership with the breakaway region of South Ossetia.

"We said on many occasions that the talks between Karasin and Abashidze damage our national interests," said Nugzar Tsiklauri from the United National Movement. He reminded Kommersant that in ex-president Mikhail Saakashvili's party bilateral meetings were always considered as "attempts by Moscow to annul the Geneva format of multilateral talks," and the demonstrative appointment of Grigory Karasin as representative for the ratification of the agreement with South Ossetia "only underlines Moscow's ambitions."

Tbilisi was also taken aback by Russian Foreign Minister Sergei Lavrov's announcement about the possible inclusion in the talks between Karasin and Abashidze of representatives from South Ossetia and Georgia’s other breakaway “republic” of Abkhazia, both of which are recognized by Moscow.

"This is ruled out," said Georgian Minister for Conciliation and Civil Equality Paata Zakareishvili, who added that the inclusion of the “republics” in the talk's bilateral format would be possible only if "Moscow refused to recognize their independence."