Press Digest: What is behind Marine Le Pen’s visit to Moscow? 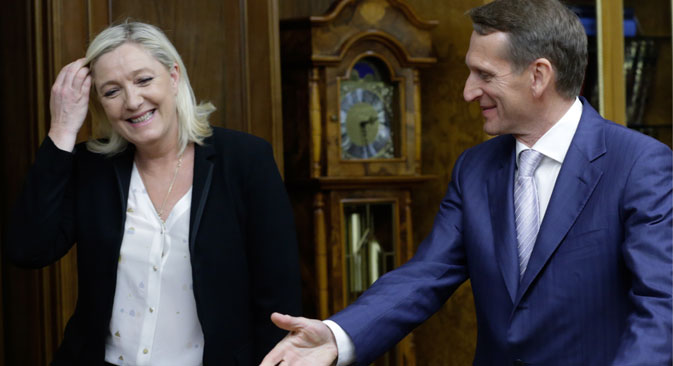 RBTH presents a selection of views from leading Russian media on international events, featuring reports on French National Front leader Marine Le Pen's visit to Moscow, a move by Berlin and Paris aimed at countering UK efforts to reform the EU, and an Asian cooperation proposal that moves Taiwan closer to China.

The Gazeta.ru online newspaper reports on French National Front leader Marine Le Pen's visit to Moscow, where she met with State Duma Speaker Sergei Naryshkin. Although the details of the meeting are still unknown, the French mass media assumes that the visit is related to the financing of the party, which makes no secret of its sympathy to Russia's policy on Ukraine.

But in the western press, according to Lukyanov, this meeting, which he believes is unlikely to lead to any practical results, is likely to engender rumors that Russia is continuing to hope for a schism within the EU.

According to Lukyanov, Le Pen should not really be viewed as a serious candidate for the post of French president: "She will never win in the second round. She is esteemed as a populist, but is not trusted as an administrator," he said.

The centrist newspaper Nezavisimaya Gazeta reports that German Chancellor Angela Merkel and French President Francois Hollande have prepared a proposal to strengthen the economic and political unity of the eurozone. The document goes against the grain of what UK Prime Minister David Cameron is currently trying to obtain from Berlin and Paris. By the end of 2017, Cameron also wishes to hold a referendum on the UK's membership in the EU.

"We can confidently say that the EU will not review its agreements because of the UK," said Lyudmila Babynina, director of the Center for Political Integration at the Russian Academy of Sciences’ Institute of Europe, in an interview with the newspaper.

Babynina believes that neither France, nor Germany, nor the other EU countries will accept this: "Everyone remembers the difficulty with which the countries signed the Treaty of Lisbon. There will definitely be no review of the agreement basis, which may undermine one of the main principles of the EU's single market: freedom of movement," she said.

But this does not mean that Cameron's talks with EU officials about changing the balance of competencies exclude the possibilities of compromise, said Babynina.

The business daily Kommersant writes that, considering the intensifying competition between the U.S. and China in Asia, Taiwan could become a potential mediator between the two countries.

After U.S. Secretary of State John Kerry's visit to China, in which he talked about the serious differences in the countries' approach to the territorial disagreements in the South China Sea, Taiwanese President Ma Ying-jeou has proposed to turn the region into an area of multilateral cooperation. According to the Taiwanese leader, China and its Asian neighbors should abandon their disagreements on the ownership of the territories, which are rich in hydrocarbons, and start developing them together.

By calling for an easing of the pressure on mainland China, the president of Taiwan, a country that has its own historical and ideological disagreements with China, essentially refused to join the "anti-China coalition" of Asian countries, writes Kommersant.

Taipei's initiative has only upped the ante in the intensifying competition between the U.S. and China in Asia, considering the fact that Washington plays the leading role in guaranteeing the island's security.

"By moving closer to China the Taiwanese government hopes to benefit from the re-establishment of relations with Beijing, especially on the eve of the 2016 elections," said Alexander Lomanov, chief scientific collaborator at the Far East Institute of the Russian Academy of Sciences.

"The governing Koumintang party is in a difficult position and in the elections its candidate will need to make some strong moves in order not to lose to the representative of the oppositional Democratic Progressive Party, which wants to harden Taiwan's policy towards China." 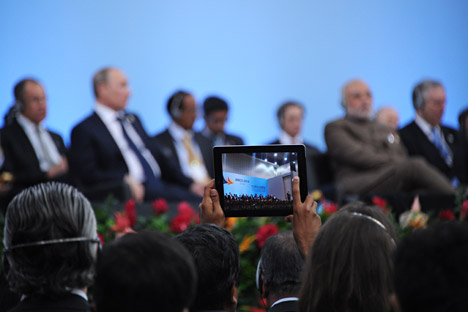