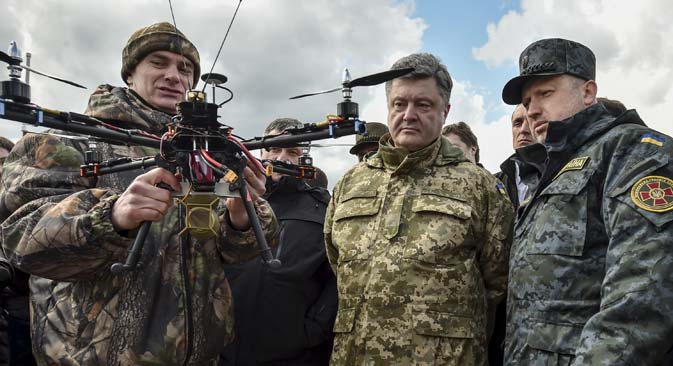 RBTH presents a selection of views from leading Russian media on international events, featuring reports on Ukraine’s new strategy to carry out reforms to join NATO, a counteroffensive by government troops in Iraq, and Russia’s short-term plans for substituting the undelivered Mistral helicopter carriers.

Ukraine to switch to NATO standards

The centrist daily Nezavisimaya Gazeta writes that Ukraine is not going to apply for membership in NATO in the near future, but intends to begin preparing for the transition to NATO standards.

According to the newspaper, Ukrainian President Petro Poroshenko has signed a new national security strategy, which presumes not only the development of closer ties with the alliance, but also with the EU. This happened just ahead of a Ukraine-NATO conference and a session on the reforms in the defense sector, notes Nezavisimaya Gazeta.

The newspaper recalls that the new strategy draft was presented in early April by Secretary of National Security and Defense Oleksandr Turchynov, who stated that Ukraine sees "Russia's aggressive policy" as one of the "main threats." Other threats include corruption, an inefficient system of public administration and the economic crisis.

According to Turchynov, the Ukrainian authorities aim to solve all these problems and reach the next level of development by 2020. The planned reform should change the country so drastically in the next five years that Ukraine would be able to apply for membership in the EU and NATO, writes Nezavisimaya Gazeta.

Georgiy Syrotyuk, director of the think-tank Ukrainian Studios for Strategic Studies, told the newspaper that what is important for Kiev now is not a formal decision specifying the date, but the reforms that will allow a switch to EU and NATO standards.

Shi'ite militias hit back against Islamic State in Iraq

Following the capture of the strategically important town of Ramadi by the militants of Islamic State (ISIS) in Iraq, government troops have launched a counteroffensive, the business daily Kommersant reports.

The newspaper notes that the campaign started successfully at first glance; the troops have managed to seize two districts of Ramadi. If the government forces manage to recapture this city, it will be an even more important victory than the capture of Tikrit, writes the newspaper.

According to Kommersant, the main objective is to stop the rapid advance of ISIS, which is trying to create a corridor which will make it possible to carry out an offensive toward Baghdad. However, the declared anti-terrorist operation threatens to turn into a confessional conflict that will only strengthen the position of ISIS, says the newspaper.

Kommersant explains that, in view of the complete demoralization of the Iraqi army, the backbone of the government forces was formed by Shi'ite militias, who named the campaign in Ramadi after one of the Shi’ite imams. The population of the so-called Sunni Triangle – formed by Ramadi, Tikrit and Baghdad – is extremely hostile toward the Shi'ite militias.

"After a decade of chaos in Iraq, the efforts of the Iraqi army, like the current attack on Ramadi, do not look serious at all," United Arab Emirates-based Middle East expert Theodore Karasik told Kommersant.

"The bottom line of what is happening now is a confessional war featuring two powers – Iran, which supports the Iraqi Shi'ites, and ISIS with its potentially broad social base and sponsors in the Sunni Gulf states. If Iran, for whatever reason, weakens its support, ISIS will win outright. If the status quo persists, the conflict will take years. "

Mistrals to be substituted with Nosorog-class vessels

Online newspaper Gazeta.ru reports that the conflict between France and Russia over the undelivered Mistral-class helicopter carriers has entered a new stage. Now, Russia is not only looking for ways to get the money back, but is studying the possibilities of replacing the helicopter carriers in its navy.

A temporary replacement has been found in a 15-year-old reserve – two landing ships of the Nosorog (Rhino) class called Alexander Nikolayev and Mitrofan Moskalenko, the website reports. Gazeta.ru admits that the Nosorog ships are inferior to Mistrals in many respects; they can accommodate only four helicopters instead of 16 and have a shorter range.

However, according to the experts interviewed by the website, the absence of the Mistrals in the Russian navy will not affect its combat capability.

"The Mistral ships were not originally in our arms program," Director of the Center for Analysis of Strategies and Technologies Ruslan Pukhov told Gazeta.ru.

"It was a luxury item, which was interesting when there was an active rapprochement between Russia and the West."

The newspaper reminds its readers that, in mid-May, Russia proposed to France to terminate the contract for the supply of the Mistral ships and return €785 million – but on the condition that the customer allows the sale of ships to any third party.

"We must also take into account the fact that France does not need these ships at all. If they do not sell them, do not cut them into scrap metal and do not sink them, they will stay in their ports. The 2017 presidential election is not far off, and nobody knows who will come to power in France," said Pukhov.

TROIKA REPORT: Is time running out for Assad in Syria?