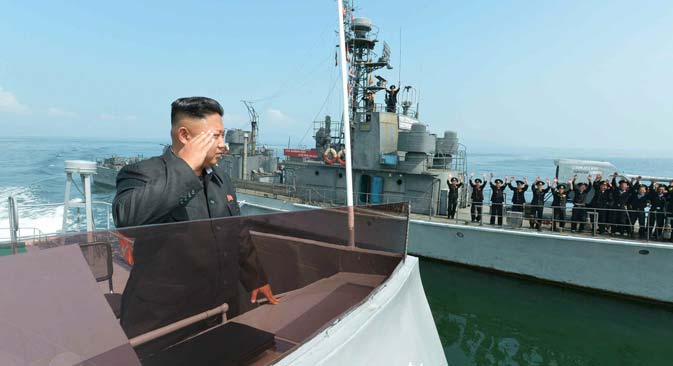 When asked about the situation surrounding the resumption of six-party negotiations related to the North Korean nuclear program, Special Envoy Grigory Logvinov told RIA Novosti that Moscow would not permit any “conspiracies” against Pyongyang. “The statements about increased pressure and duress are counterproductive, and cannot lead to anything positive,” Loginov said

In May, high-ranking diplomats from the U.S., Japan and South Korea held a meeting in Seoul where they agreed to increase pressure and sanctions against North Korea in order to bring Pyongyang back to the negotiating table

Going by Logvinov’s statements, it is fair to assume that Russian diplomats believe that steps to strengthen mutual trust and “reduce the level of military activity” would be a better option than increased pressure and sanctions.

Regime change instead of disarmament

Analysts, meanwhile, are skeptical about the prospects for the resumption of six-party talks. They observe the difference in the approaches of the parties to the negotiation process.

“For the U.S. and its allies, negotiation is a tool aimed at pressuring North Korea to disarm, and change the country’s regime,” says Konstantin Asmolov, a leading researcher at the Center for Korean Studies of the Institute of Far Eastern Studies. “For North Korea, they are a way of receiving limited legitimacy of its nuclear status.”

Asmolov adds, “The negotiations took place as long as there was a certain group of countries aimed at forcing the opposite sides towards consensus – Russia, China and South Korea.” The researcher says these countries had leverage on Washington and Pyongyang. “However, after the victory of the conservatives in Seoul, South Korea moved to the camp of Americans, and the negotiations came to a complete standstill.”

Now, there is a situation where Moscow can double or even triple its resources to stimulate the North Korean talks. “Intensifying the negotiating process about the North Korean program is extremely important to Russia,” says Gevorg Mirzayan, a researcher at the Institute of USA and Canada.

Mirzayan believes that Moscow wants to use the negotiating process to strengthen its position in the region, especially in terms of relations with South Korea and Japan. “Without close relations with these countries, it is strategically disadvantageous for the Kremlin's ‘Turn East,’ policy, which can become overly dependent on China.”

Security guarantees can be expected from Russia

Russia has the opportunity to play the role of ‘honest broker.’  Moscow could help the adversaries overcome their mistrust.

Moscow can address Pyongynag’s concerns by providing security guarantees to North Korea (as it did with Iran), as well as provide storage for North Korean nuclear material.

In Pyongyang, there seems to be agreement for Moscow to be more actively involved in the negotiation process. “Kim Jong-un, like his father, attaches great importance to relations with Russia,” says Asmolov.

He adds that the world paid attention to the fact that the North Korean leader did not attend the May 9 ceremonies in Moscow, but lost sight of two points. “First of all, the man with the second rank in the North Korean hierarchy – Kim Yong-nam attended. And secondly, just after the North Korean news on local television, there was a ten-minute speech by the Russian ambassador devoted to the Great Patriotic War, its results and implications for the two countries. This is an unprecedented event,” says Asmolov.

Moscow benefits by developing a special relationship with North Korea, because it would give her a trump card in bargaining with the United States and the ability to demand concessions from Washington in other areas of foreign policy.