Press Digest: Ukraine on brink of war again as violations of truce increase 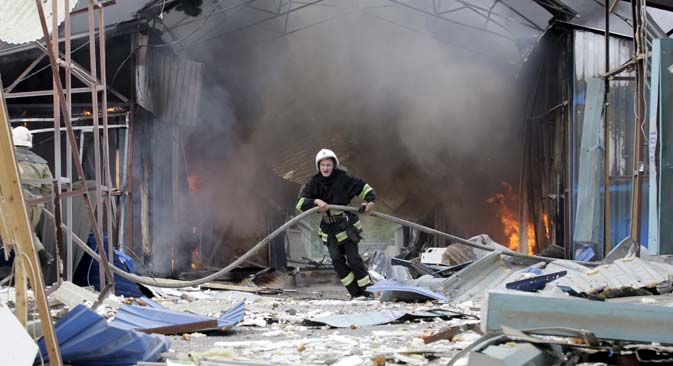 A firefighter works to extinguish a fire at a local market, which was recently damaged by shelling, in Donetsk, Ukraine, June 3, 2015. Source: AP

RBTH presents a selection of views from leading Russian media on international events, featuring reports on a worrying upsurge in hostilities in the Donbass region of eastern Ukraine, the results of the presidential election in Latvia, and preparations for the upcoming Shanghai Cooperation Organization summit in Moscow.

Situation in Ukraine close to breaking into open conflict

Ukraine’s Donbass region today is closer than ever to a resumption of hostilities, writes business magazine Expert. Clearly taking the side of the rebels, the publication writes that the situation increasingly resembles the way things were at the time of January 2015; the rebels are tired of the “incessant attacks and violations of the peace agreements,” Moscow is tired of Kiev's “constant reluctance to comply with the political articles of the truce,” while the EU “turns a blind eye to everything.”

One of the few factors restraining the rebels from embarking upon a full-scale offensive is the reluctance of Russia to enter into conflict with the European Union, writes the magazine.

Moscow hopes that it will be able to reach an agreement with the Europeans about some convention on Ukraine, as well as to persuade the EU to join Russia in influencing Poroshenko to resume the process of federalization in the country.

However, there is less and less hope for that with every day: Russian-European dialogue has stalled, while tensions between the EU and Russia have intensified in recent days (over the travel blacklist scandal).

Expert recalls a statement made by German Chancellor Angela Merkel ahead of the G7 summit, in which she said that the world order in Europe had been disrupted by the annexation of Crimea.

“A threat to the world order and the order in Europe was not posed by Crimea, but more by the moment when a democratic and prosperous Europe blessed a forcible change of power in one of the European states, namely in Ukraine,” the magazine cites Russian presidential spokesman Dmitry Peskov as saying in response.

As long as Europe does not recognize this, the process of stabilization in Russian-European relations and the normalization of the situation in Ukraine will proceed very slowly, writes Expert.

In Latvia, the head of state is elected by the members of the Saeima (Latvian parliament); Vejonis received 55 votes in the fifth round of voting and became president thanks largely to the opposition, rather than his supporters, explains the newspaper.

Unlike his main rival in the election, Egils Levits, who stands for a mono-ethnic Latvia, Vējonis, who was born in Russia’s Pskov Region, is very loyal to the Russian-speaking population, writes Novaya Gazeta.

The election result was to be expected, Juris Rozenvalds, a political scientist from the University of Latvia, told the newspaper. “Raimond Vējonis served as defense minister, and by the way, enjoyed great prestige among the [country’s] allies," said Rozenvalds.

“Latvia – in particular due to his efforts – has chosen a reasonable policy in the last few years – to fluctuate with the general line of the party, so to speak. That is, to keep rank with the EU and NATO – not to lag behind and not run ahead of the locomotive. In this respect, he largely coincides with President Berzins.”

For Russian-speaking voters in the Baltic state, Vējonis is the best option, adds Rozenvalds. “Vējonis is the president of a NATO country and has Russian roots: His mother is Russian and he was born in the Pskov Region. And, incidentally, he gave an interview to a Latvian channel in Russian immediately after the election. That says a lot," the expert points out.

SCO gaining weight on back of active Chinese commercial development

The Foreign Ministers Council of the Shanghai Cooperation Organization (SCO) has held a meeting in Moscow as part of the preparations for the organization's upcoming summit, to be held in the Russian city of Ufa in July, business daily Kommersant reports.

According to the newspaper, Russia put forward a number of proposals during the meeting, including the adoption of a special statement on the prospects for Iran's membership in the organization, as well as the involvement of the SCO platform for linking the Eurasian Economic Union and the Chinese Silk Road Economic Belt project. Experts interviewed by the newspaper believe the initiative is promising.

"China can provide strong support to Russia and its plans for the development of the Eurasian Economic Union," Alexander Lomanov, the chief researcher of the Institute for Far Eastern Studies at the Russian Academy of Sciences, told Kommersant.

"The People's Republic of China is entering a new phase of development, which is radically different from the old; from an exporter of goods, it is turning into an exporter of capital."

According to the expert, the Chinese economy is already flush with money, so there was an idea to take investment abroad and build a transport and economic corridor that would serve Chinese trade and export to Europe. "In fact, we are talking about the Eurasian transport route, which has been discussed a lot in Russia," adds Lomanov.

The name of the main candidate for the post of Secretary General of the SCO was also announced at the meeting; according to Kommersant, the principal contender is Rashid Alimov, a diplomat from Tajikistan.