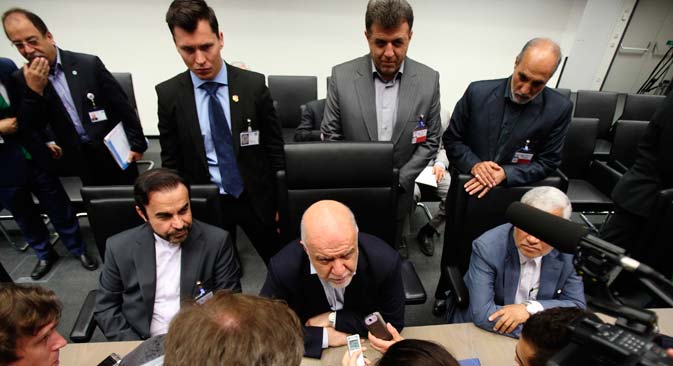 The opening session of a meeting of OPEC oil ministers in Vienna, Austria, June 5, 2015. Source: Reuters

RBTH presents a selection of views from leading Russian media on international events, featuring a report on the ongoing negotiations over Iran’s nuclear program, as well as previews of Russian President Vladimir Putin’s upcoming meeting with Pope Francis in the Vatican, and parliamentary elections in Turkey.

U.S. seeking to conclude deal with Iran at any cost

The centrist newspaper Nezavisimaya Gazeta reports that the Iranian delegation has joined the talks on Tehran's nuclear program in Vienna. U.S. Secretary of State John Kerry is not among the negotiators as he is recovering from a broken leg in Boston. But this is not the only problem facing Washington: Iran is in no hurry to make concessions and is increasing its low-enrichment uranium reserves.

The newspaper reminds its readers that according to the conditions stipulated in the preliminary deal, Iran will have to reduce its low-enrichment uranium reserves almost 30 times over. In turn, the U.S. negotiators will have to convince American legislators that if the final agreement is concluded, Iran will get rid of 96 percent of its fuel reserves in the space of several months.

Moreover, U.S. President Barack Obama is faced with a crucial choice: If he gives the green light for lifting the harshest of the sanctions currently in place against Tehran, Washington will lose an instrument for influencing Iran on the necessity of a gradual implementation of all the agreement's points. And if he does not, then he risks undermining the deal, since Iran's conservative circles are already very skeptical of the agreement.

"The issue of low-enrichment uranium will not be an obstacle for concluding the final agreement," said Anton Khlopkov, director of the Energy and Security Center and expert at the Russian Council on Foreign Affairs. In Khlopkov's view, this is strictly a technical question and since November 2013 Iran has been carrying out its obligations consistently and rigorously. "Any discrepancies found by the IAEA [International Atomic Energy Agency] should not be interpreted as malice on Iran's part," said Khlopkov.

The daily business newspaper Kommersant reports on the June 10 meeting between Pope Francis and Russian President Vladimir Putin in the Vatican. Experts believe that even though the meeting will be between two heads of state, it does not mean that they will not also speak about spiritual matters.

"They will discuss the persecution of Christians in the Middle East," says Father Alexei Dikarev, collaborator at the Secretariat on Inter-Christian Relations at the Moscow Patriarchate's Department of External Church Communications. The meeting will also certainly focus on the situation in Ukraine.

"Vatican's position on the conflict in Ukraine is acceptable for Russia," adds Dikarev. "It calls for a peaceful regulation of the confrontation. At a meeting with Ukrainian Catholic hierarchs at the beginning of 2015, Pope Francis stated that the situation in Ukraine is an internal conflict. Patriarch Kirill on many occasions expressed his satisfaction with the Pope's balanced position on Ukraine."

Roman Lunkin, president of the Experts Guild for Religion and Law, remarked that this will be the first meeting between the pontiff and Vladimir Putin since the seizure of Crimea and the subsequent conflict in south-eastern Ukraine.

"It is very likely that during the audience the discussion will turn to the anti-Russian sanctions," says Lunkin. "The pope positions himself as a defender of common people, therefore he understands that ordinary people are suffering from the sanctions, that the sanctions harm the development of business and thus people's well-being."

Lunkin emphasizes that the pope is one of the world's major leaders, which is why he has the capacity to influence the existing situation between Russia and the West and why his support is very important for Moscow.

Victory for Erdogan in Turkish elections would be advantageous for Russia

The business magazine Expert has published an article on the eve of the parliamentary elections in Turkey, which will be held on June 7. Analysts are unanimous in saying that these elections will be the most complicated for the ruling Justice and Development Party (AKP) since it came to power in 2002.

Vladimir Avatkov, director of the Center for Middle East Studies, International Relations and Public Diplomacy, said that recently there has been a lot of disagreement among the separate groups within AKP.

"An example is the conflict between [Turkish President Recep Tayyip] Erdogan and the famous Turkish preacher Muhammed Fethullah Gulen," explains Avatkov. "Erdogan's position is advantageous for Moscow: The Turkish president does not want more Islamization and conservatism in the AKP."

Avatkov believes that during the elections Erdogan will seek the support not only of his standard electorate of moderate Islamists and the new middle class in the country's east.

"He is trying to attract the votes of western Turkey's secular electorate, which is disillusioned with the Republican People's Party and is fighting for the preservation of economic stability. Erdogan also wants to receive the votes of the moderate nationalists. This is why he makes harsh declarations about Russia annexing Crimea and Putin's visit to Yerevan. It is typical pre-election rhetoric," he said.

In Avatkov's opinion, due to the loss of a part of the Islamist electorate, it will be difficult for the AKP to repeat the result of the last elections, when the party received 49 percent of the votes and 60 percent of the parliamentary mandate.